I try to understand some basic concepts, but I'm stuck with this question. I have this schematic, with a power supply 9V, a resistor 450ohm and a LED. Assuming the LED consum 16mA, this resistor have an voltage drop of: 7.2V My questions is why this resistor "limit" the voltage with this voltage drop? I learn that resistors limit the current, not the voltage, so my power supply can deliver 1A, only 16ma would reach to the LED, so why I have a LED power by 9-7.2v = 1.8V and 16mA, and not power by 9V and 16mA? 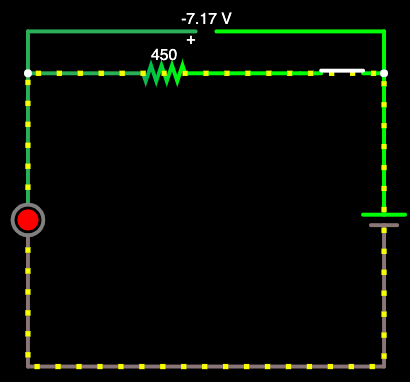 My answer is simple: the resistor limits the current and diode limits the voltage.

It is easy to explain how the linear resistor limits the current. Just apply Ohm's law to the rest of the voltage across the resistor I = (V - VLED)/R.

But it is much harder to explain how the diode limits the voltage across itself. Perhaps for this reason there are no intuitive explanations for this phenomenon. I will try to explain it by using the concept of dynamic resistance.

In the (almost) horizontal part of the IV curve, think of the diode as an ohmic resistor with high and (relatively) constant resistance. So, when you increase the voltage across the overall network, the voltage across diode increases proportionally to the current through it - V = I.R (see the top of the picture below). 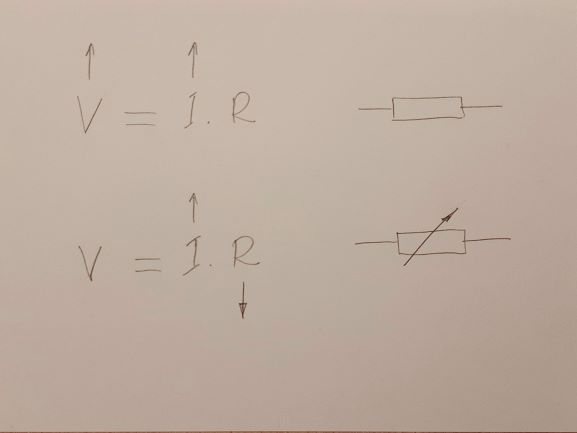 But when you enter the vertical part of the IV curve, supprisingly the diode begins changing its resistance - you increase the current but it decreases its resistance with the same rate. As a result, the product of them - the voltage across diode, stays constant (see the bottom of the picture above).

I have shared this explanation in the RG discussion of How many types of resistance can be represented by a variable resistor?

You can see there a graphical representation of another version of this clever trick where the overall voltage stays constant... the limiting resistor decreases its resistance RL... but the "diode" decreases its static resistance RST as well. As a result, the two IV curves rotate and their intersection (operating) point moves along the new IV curve of the "diode". It is a vertical line in this region; so the voltage drop across the "diode" stays constant. 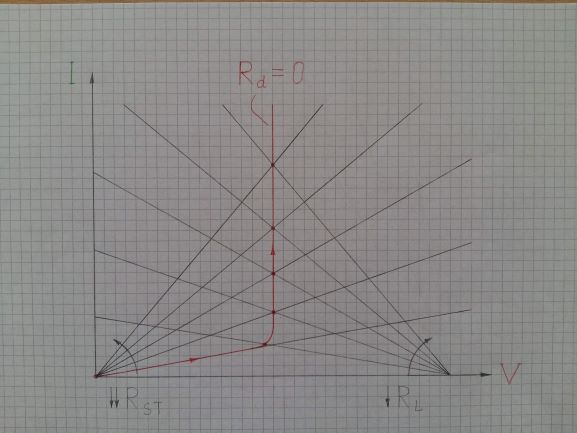 The resistor is not limiting the voltage for the diode, the voltage on a diode can be considered as constant: 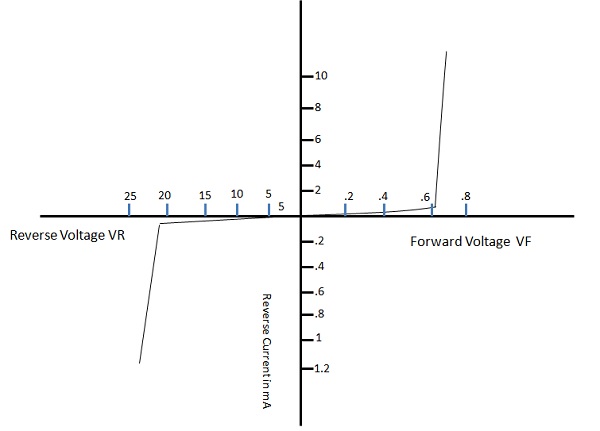 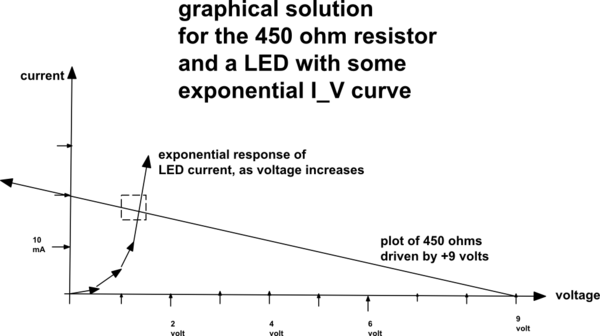 Thus there is no threshold voltage.

You have to sacrifice an amount of voltage to activate/open LEDs. That voltage is known as forward voltage Vf. In your case, Vf of the used LED is around 1.8 V, so it sucks 1.8 Volts and after that the LED is almost a short circuit. Remaining 7.2 volts drops on the resistor.

Not the answer you're looking for? Browse other questions tagged voltage led current basic or ask your own question.

3
Art of Electronics - Zener Diode Example
0
Why does an LED always need a resistor?
0
Circuit analysis with an LED and a voltage divider