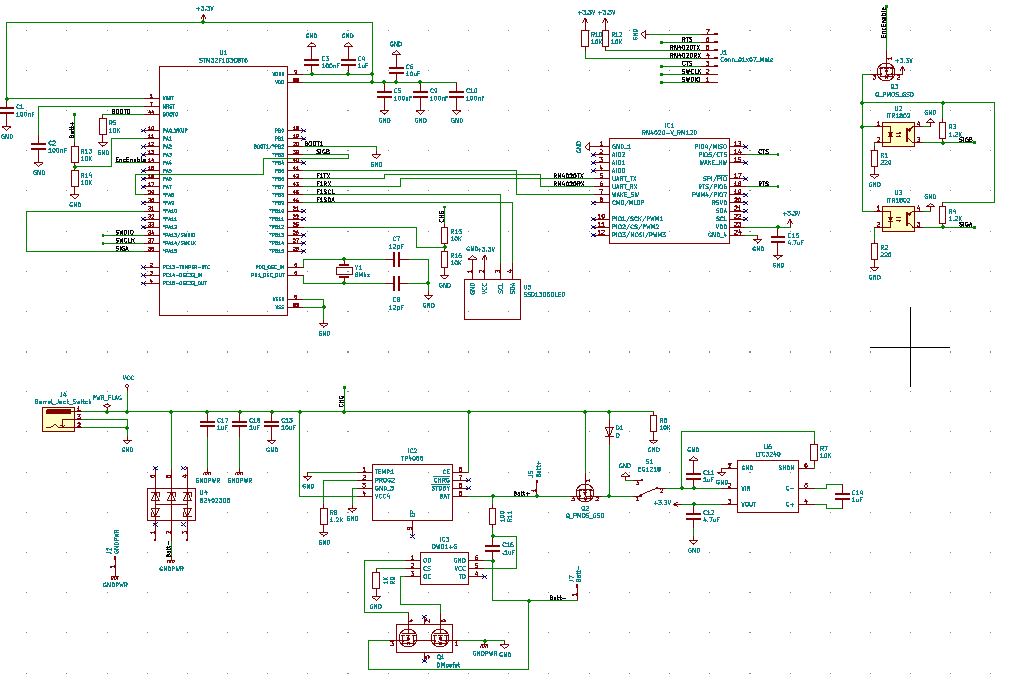 This is the circuit schematic, top part is sensor, bluetooth, microcontroller, oled and pins related all working from 3.3v coming from regulation of a charge pump; bottom part is power regulation part, smart load sharing for LiPo, battery charging and battery protection circuit (though battery has its own) and ESD protection from DC barrel jack.

After a few stable uses the system smokes and at some point each of this components has been found shorted, three times the system has failed being the first time the uController the one which failed through shorting and minimally heating(though I didn't use the system as expected and injected voltage several times through OLED pins and power switch and I think I could have connected something wrong so it was my fault) and the second and the third time being the tp4056 the one which first smoked and shorted immediately after connecting dc barrel jack (polarity and voltage checked in open circuit) with the curiosity that the third time something happened (I let dc barrel jack connected longer compared to second time where I saw the smoke and disconnected it immediately) that made ESD protection, ltc3240 and uController short (which makes me believe that tp4056 is not the problem but something in the uController) with the fact that neither bluetooth, sensors nor OLED screen have ever damaged.

1st fail: Soldered everything, injected 3.3 volts through oled pins and 5v through switch so it passed through charge pump so I could test it; after several time of using the system (programming it and related stuff) found a short after and OLED not displaying anything, ARM cortex is shorted, changed it and everything works (it maybe was my fault but ARM cortex is found damaged on third fail though)

2nd fail: Tp4056 smokes after connecting barrel jack now I decide not to inject voltage, a short is detected, tp4056 is the fault, change it, everything works again and achieve one complete charge cycle from 3v to 4.2 volts.

Thanks for your precious time

Browse other questions tagged power-supply pcb-design battery-charging short-circuit or ask your own question.

0
MCP73834 disintegrates after a couple of hours
0
Battery Protection IC: How to ensure that even under-voltage batteries are allowed to be charged?
3
TP4056 lipo charger output voltage
0
solar cells with old battery- safe?
0
Charging 8 LiIon 18650 cells in parallel
0
Charging 3P pack of 18650 batteries using a single TP4056, and protection standards
0
Recommendations for 3.5 switching audio jack which does NOT short to Ground at plug-in or plug-out?