I have a lovely Atmel touch sensor whose output is high only as long as it's touched. I want both off-on and on-off edges of its output to initiate two 3 sec pulses (and the time between edges is > 3 sec). I route the output through a dual inverter (delay), which is XORed with the original to create a brief positive pulse at each edge. The brief pulses each trigger in succession the 555 which outputs the two 3 sec pulses. If I just wire the inverter, XOR and 555 to the V supply (3.3V), then everything works great.

Complicating the situation is that I want to run off battery power and of course want to consume as little current as possible for long battery life. As such, I want the touch sensor to sense continuously. It is a low quiescent current sensor, so it doesn't load the battery too much. But I want to energize the inverter, XOR and 555 only while the touch sensor is touched and for an additional 3 sec after it is no longer touched in order to do some start and stop functions elsewhere in the circuit (controlled by a PULSED_33V signal).

It's easy to power the components with the sensor touched/on in that I just send the sensor output to the base of an NPN tied high, which draws down a PMOS gate, which supplies 3.3V. My challenge is finding a 'bootstrapping' strategy to keep power on for a moment just after the output goes off. I sought to use two NPN's as an OR gate to the PMOS, the 555's pulse being fed to the base of the second NPN, and putting a nice fat 10uF capacitor between the 3.3V supply and the components' power inputs to energize them briefly until the hi-to-low 3 sec pulse arrived to take over keeping the PMOS on. But it's not going as well as I'd hoped.

In the attached pic, notice the dual inverter (IC5) on the left. I actually had to include an additional capacitor, since the interver's delay wasn't quite enough to provide a sufficiently delayed version to the XOR (IC2). And I had to include an additional NPN inverter because the 555's (IC1's) TRiGger input expected a high to low transition to trigger it. Continuing to the right is the RC for timer, an LED socket and resistor as a troubleshooting indicator, and finally the second NPN of the OR to the PMOS. On the far right is the fat capacitor that I hoped would be sufficient to maintain power until the on-off edge percolated through to the 555.

Can anyone suggest a better strategy for keeping those components powered until the 555 can take over? Or show me what I might tweak to get it to work? Or just show me how my circuit is hopelessly flawed? Thank you so much.

When the components are hard wired to 3.3V (removing R115 and shorting C9), touching the sensor causes the LED to light up for 3 sec and when the sensor is no longer touched, the LED lights up for 3 sec again. But when trying to bootstrap with R115 and C9 present in-curcuit, the LED is bright for 3 sec, then is less bright until the sensor is not touched at which point the LED just goes off and stays off. 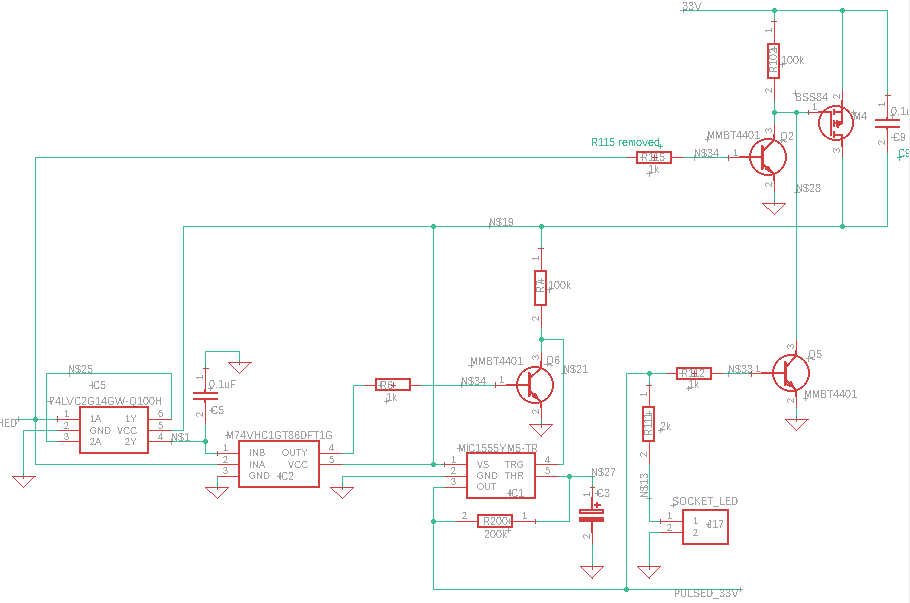 Browse other questions tagged sensor 555 npn pmos bootstrap or ask your own question.

0
PIR sensor based LED light controller
2
How the pin2 of 555 timer triggers this simple circuit?
0
Knock Sensor using 555 Timer with a timed light
1
Is it possible to toggle a monostable 555 circuit?
3
General circuit debugging techniques, and my 555 timer in particular
1
Why does this Edge Trigger Work on input of 555 monostable config?
1
What is the best between a transistor and a pmos and which resistances
2
Designing a circuit with a “short-lived” switch with 555 IC