I have a circuit which has an exponential function as shown in the figure. I tried to put an anti-log opamp with the diode and BJT transistor, but did not get what I wanted. 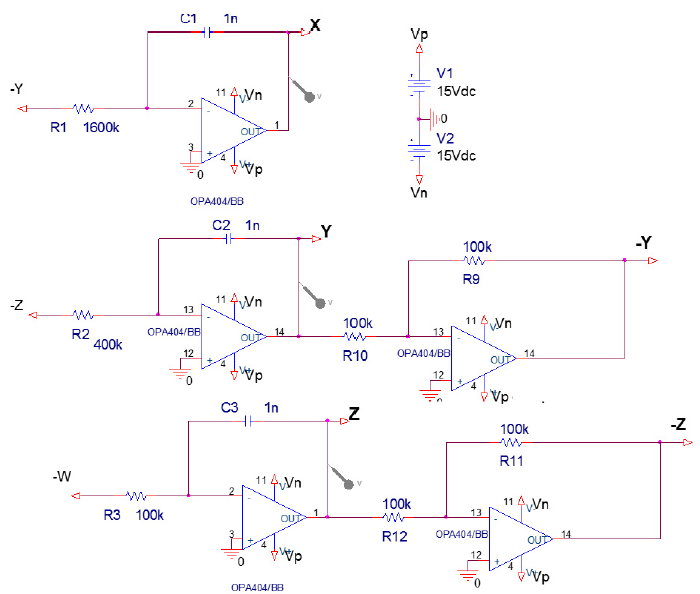 I think the whole problem is in the "exp" part.

Your state transition equations have no input, so the output functions depend only on the initial values of the state variables and the parameters a, b and c. Of course, some of parameters a,b and c can be considered as inputs.

Opamps have several practical limitations. Their frequency range is limited, because transistors are slow, the spectrum of the input signals should stay low enough for acceptable gain. There are more slowness phenomenas. The changing rate (volts/second) of the outout voltage is limited to "slew rate" which is shown in the datasheet. Integrators charge and discharge capacitors, so output current limits are also essential limitations. Offset voltage make integrators drift away to the max or min output voltage sooner or later, offset voltage is like a constants DC input for integrators.

You can find easily antilog amp schematics which do not expect any certain transistor type. This link https://voer.edu.vn/m/operational-amplifiers/56a79505 contains one with quite plausible DC analysis. That 2 opamp+2 transistor circuit probably is the same you have already seen. It assumes a pair of identical transistor. Vt =kT/q = the thermal voltage unavoidably brings in the temperature. It must be stable for consistent operation. But the reverse saturation current of the PN junction is eliminated from the formula.

The shown antilog amp works properly only in limited input voltage range because - the exponential exp(V/Vt) in Shockley's diode current law is assumed to be much larger than one (=V is much more than 26 mV, for ex. V>125 mV) - non-ideal leaks must be neglible when compared to diode current given by Shockley's law - resistive voltage drop in diode materials is neglible when compared to voltage obeying Schockley's law

You must store the numerically calculated state variable time functions and check if integrators can really output them in terms of voltage, opamp frequency range, opamp slew rate and max opamp output current.

You should make circuit simulation can your antilog amps really handle the whole swing range of Y and Z.

Then something beyond my math capabilities: This is a nonlinear system. A chaotic behaviour is possible.

Me and surely some others are curious what practical functionality you actually want to reach. As said, your equations show no input, so a single run in some calculation system, for ex. in Excel or Matlab should be enough if the initial values are known.

ADD: I made a couple of numerical test runs to see something of the behaviour of your system. My parameters:

A plot of the state variables x,y,z and w: 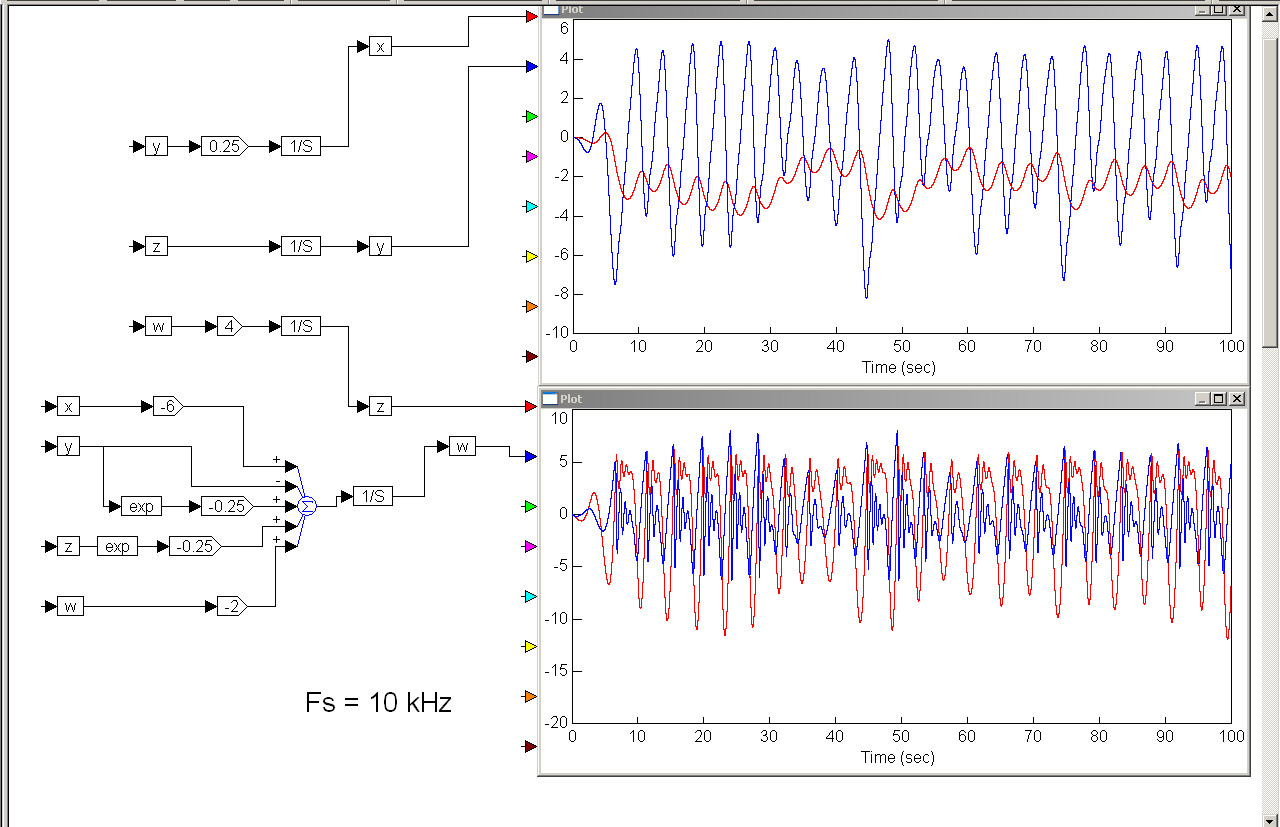 The problematic variables (due the exponentation) y and z vary widely being as well positive and negative. Making the same calculation with an analog circuit with 1 volt per numerical one needs exp(A) block which can produce hundreds of volts outputs. We can of course scale down say to 1% to keep everything below 10V, but then the smallest output would be well below one microvolt.

Antilog amps cannot handle bipolar input, something complex or clever is needed to either find equivalent equations which do not need negative input exp(A) or to design a bipolar input exponentation circuit. I do not know any simple such circuit.

Adding an offset to input A of exp(A) to and compensating it by attenuating the output is out of the question because the output is already high. But it's well possible that you can clip the inputs of the exponentials to some realizable range because the effects of the near zero exp values can be neglible for the integration. I haven't done this check, so it 's up to you to do it.

Then there's a need to show numerically that the result do not get spoiled if there's errors (noise, offset and scale errors) Without knowing the effect of the errors it's useless to try to make an analog circuit.

Not the answer you're looking for? Browse other questions tagged operational-amplifier circuit-analysis circuit-design multisim or ask your own question.