Copper oxide on cables after tinning w/ no clean flux

We just found a problem with some (translucent) speaker wire.

We have been tinning wires for a year by dipping the stripped end in no clean flux and then dipping again in lead free solder. We have a new customer that gave us translucent wires to tin and solder, one day after tinning the first batch we noticed that there was a greenish color for about 1/2" where we have tinned and soldered the wires. 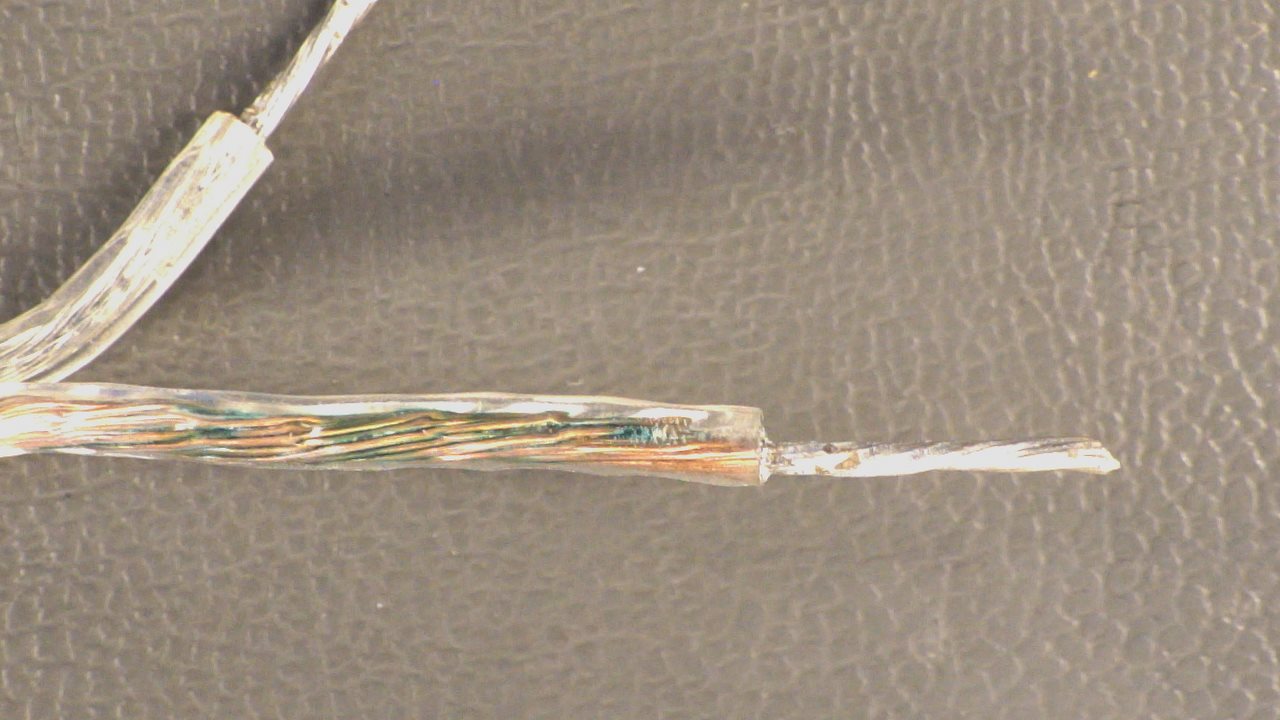 We follow the dipping procedure as directed in the flux PDF.

Has anyone seen this issue?

If it has happened before we did not notice because we were using colored wires.

The green is not an oxide. It is copper abietate. It is harmless but also green in colour like other harmful forms of copper corrosion.

It is formed when the abietic acid in the flux reacts with copper (particularly when heat-activated).

It is just the flux doing its job and reacting with the pre-existing oxides on the copper to remove them from the bulk copper surface to expose the clean copper below...except in this case it has nowhere to go and nothing to displace it (i.e solder). Copper that has no oxidation to begin with would not produce this green residue.

You can tell your customer this. It's nothing to be concerned about since it is not an actual corrosion product of copper.

Of course...unless it's due to chlorine released when PVC insulation is heated which might produce Coppper II Chloride (I'm not sure) which is also green but actually is an undesirable corrosive contaminant.

Either way, it doesn't seem like there is anything you can do about it other than not to dip the entire stripped end into flux. Even if you don't, it might wick up.

Not the answer you're looking for? Browse other questions tagged soldering wire or ask your own question.

3
Cleaning no clean flux paste
12
How to solder something as tiny as this?
2
Soldering question
7
Effects of no-clean flux or RMA flux residue on signals
0
How to clean solder flux paste
0
Using and maintaining lower end soldering iron tips without destroying them
5
Recovering from failure to clean off solder flux