How does opamp open-loop gain affect closed-loop gain in a circuit?

A is the open loop gain (the gain of the opamp itself), and \$ \beta\$ is the feedback resistors. 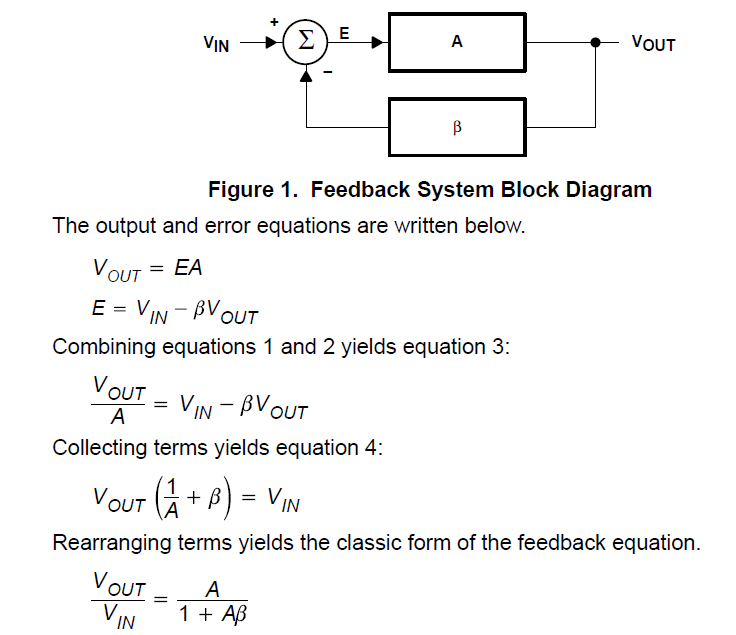 If A\$\beta\$ is very large relative to 1, then the closed loop gain approximates as \$\frac{A}{A\beta}\$ which simplifies down to

The white paper I linked goes into it in more detail. It goes into more detail about how to actually do this calculation with resistors instead of just \$\beta\$

The formula you quote is not the gain of an opamp. It is the gain of a circuit containing an opamp and several resistors. That formula only holds when the open loop gain of the opamp is much larger than that given by the formula. When that is the case, the actual value of the opamp open loop gain drops out of the equation. The derivation of the formula is given in any textbook on opamps and can be found on many websites so I am not going to repeat it here. The point is that the complete formula for the circuit gain does include the open loop opamp gain but as long as the condition I stated before is true, the formula you gave is a very good approximation. 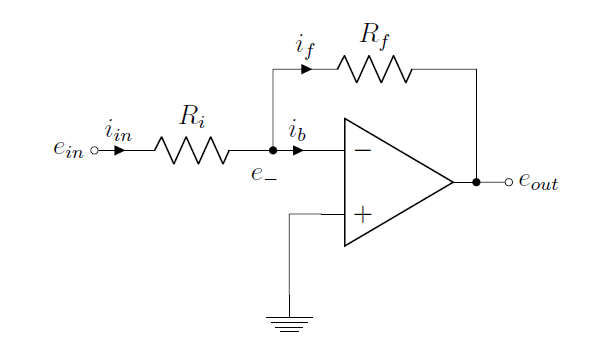 Let's start with the definition of the op amp:

This is true for every op amp. The device is a differential amplifier, with a very high gain.

Next, we can apply the assumption that the input impedance is infinite, thus \$i_b=0\$. This let's us apply Kirchoff's law at the negative input terminal, and algebraically manipulate stuff.

In case of an inverting opamp configuration there is no negative sign at the summing junction of the block diagram (two signals - input and feedback - will be superimposed at the inverting input node) - therefore, a negative sign must be used for the open-loop gain A.

Of course, we still have negative feedback (because there is a minus sign in the feedback loop).

The block "alpha" is required because the input signal is not applied directly to the opamp input node. Both factors (alpha and beta) result from the superposition theorem applied to the inverting terminal (Voltage V-)

Equating both right sides gives us:

A visual interpretation of this transfer function leads to the following block diagram for the inverting opamp configuration: 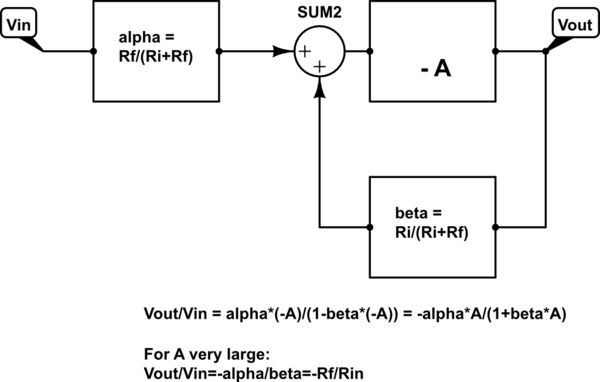 What is the gain

Looking at the expression for the gain written in the body of the question, I guess the circuit of an op-amp inverting amplifier is considered. This is historically the first circuit with negative feedback because it could be implemented simply through an operational amplifier with a single-ended input. To compare the input and output voltages, they are subtracted by a simple resistive summing network R1-R2 (two resistors in series). Today’s op-amps do the same by a differential input; so, to realize the inverting circuit, the non-inverting input is non used (connected to ground).

I understand very well what excites the author of the question because I was in this position many years ago. I have found that the best way to understand and explain intuitively op-amp circuits with negative feedback is to consider the operating amplifier not as proportional but rather as an integral device... ie, as some "living being", which observes the voltage at its input and changes the voltage at its output.

It is also very important to show where currents flow by closed lines (current loops). For this purpose, the power supply rails and ground should be connected by continuous lines. Also, voltages should be visualized. I will demonstrate these techniques with the discussed circuit of the op-amp inverting amplifier: 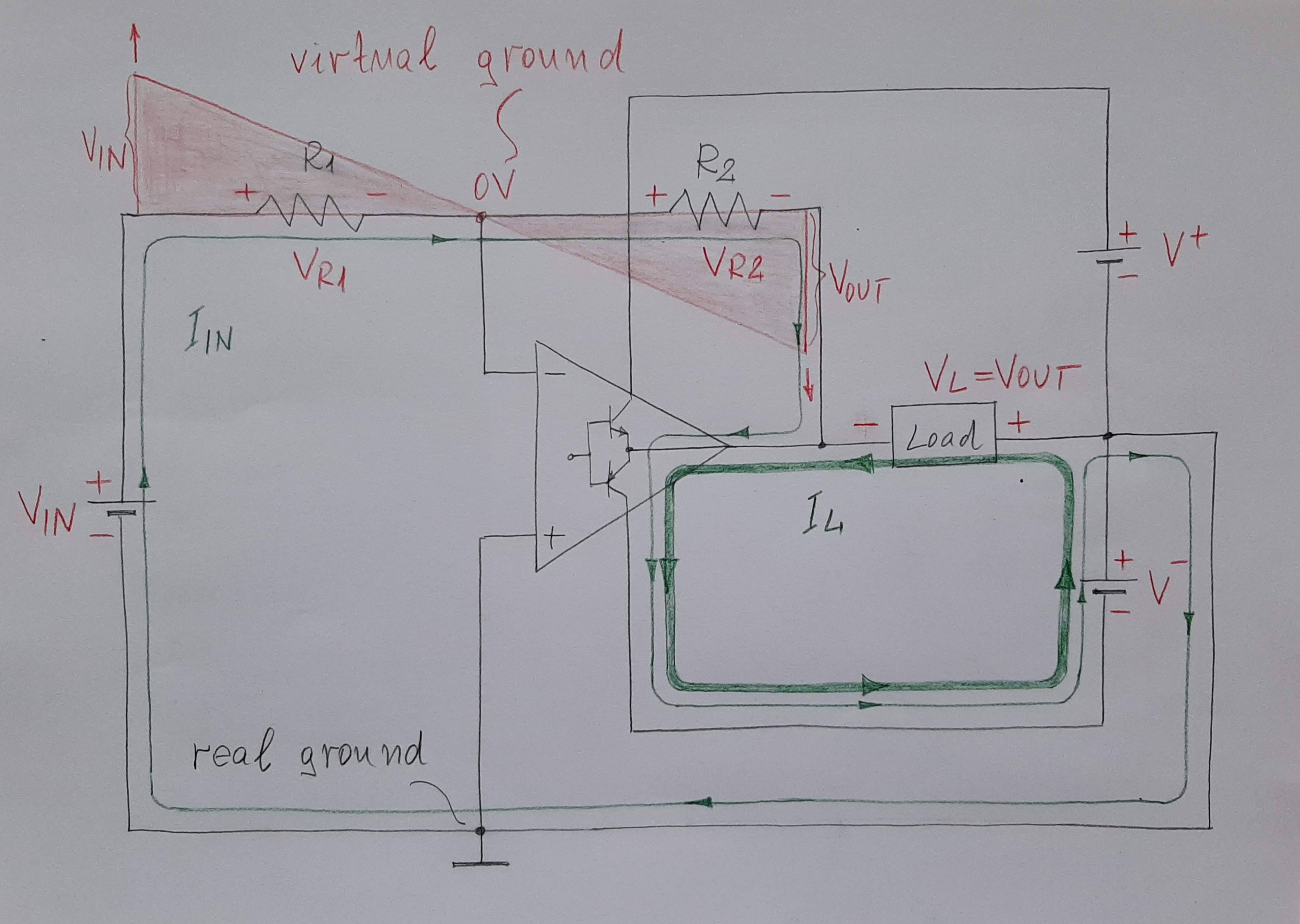 The resistive network R1-R2 acts as a voltage divider driven with positive voltage from the left; so, the voltage of the common (summing) point tries to change to positive. However, the op-amp "sees" that and begins to oppose this attempt. It changes its output voltage to negative thus driving the R2-R1 voltage divider from right... until restores the zero voltage of this point. It behaves as a ground since it has zero voltage... but it is not connected to the real ground... it is not a ground... that is why it is called "virtual ground".

Note the op-amp does this by the help of the negative supply that is connected in series (through the ground line) and in the same direction with the input voltage source. Thus the whole network is driven by the sum of the input and output voltage... and the current is IIN = (VIN + VOUT)/(R1 + R2). "Copies" of the two voltages appears across the corresponding resistors: VIN - across R1, and VOUT - across R2. They are connected by the common current, so I = VI/R1 = VOUT/R2 or VOUT/VIN = -R2/R1. Note this relation does not belong to the op-amp... it belongs to the humble 2-resistor circuit.

In addition to the feedback current IIN, also bigger current IL flows through the load (if there is such). Note this current is provided entirely by the negative power supply. 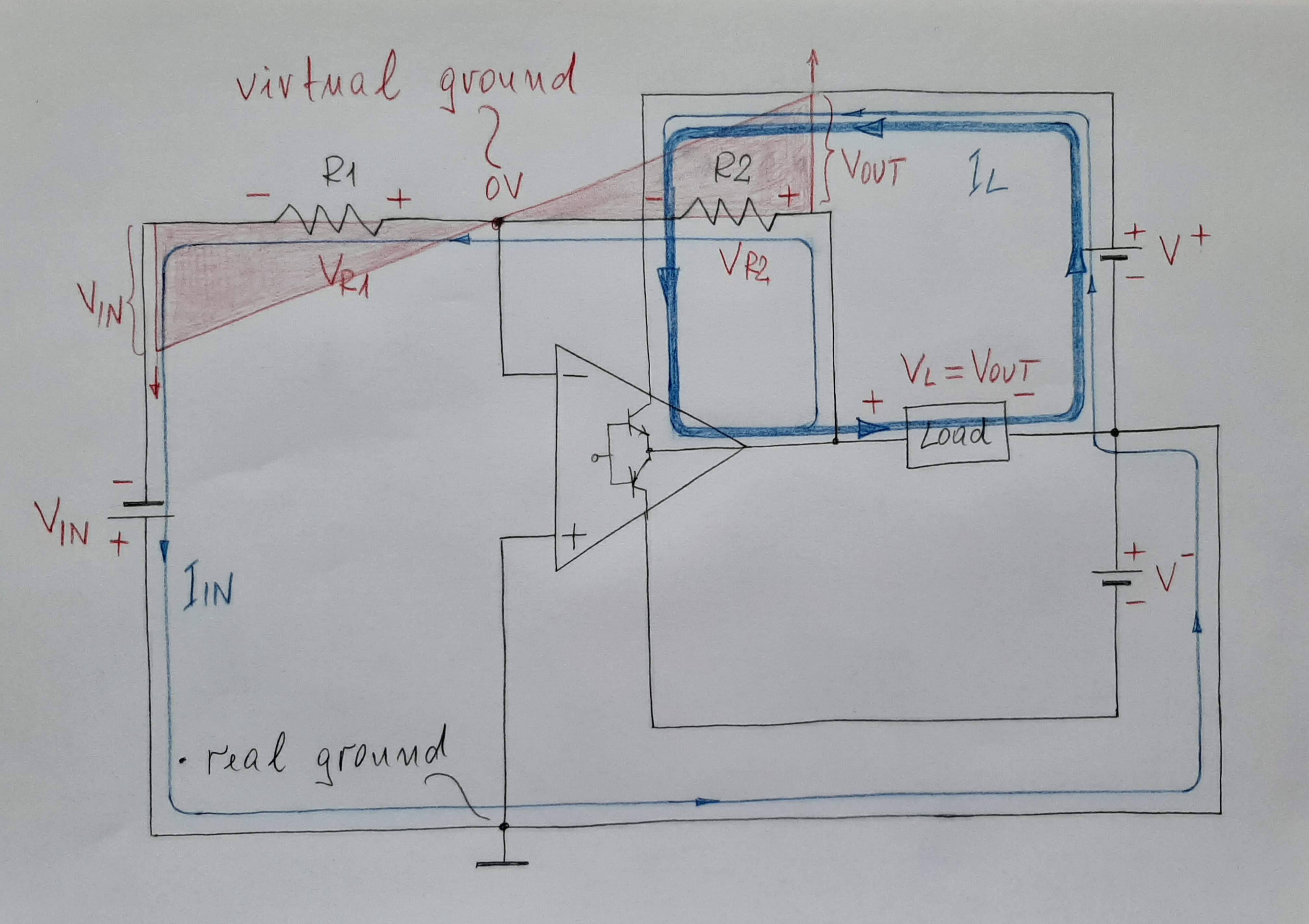 Now the resistive network R1-R2 acts as a voltage divider driven with negative voltage from the left; so, the voltage of the common (summing) point tries to change to negative. Again, the op-amp "sees" that and begins to oppose this attempt. It changes its output voltage to positive thus driving the R2-R1 voltage divider from right... until restores the zero voltage of this point (the "virtual ground").

Now the op-amp does this by the help of the positive supply that is connected in series (through the ground line) and in the same direction with the input voltage source; so the whole network is driven by the sum of the input and output voltage.

In this case, the load current IL is provided entirely by the positive power supply.

Conclusion. Supprisingly, in this inverting configuration, the sophisticated op-amp is forced to serve a humble resistive circuit (passive voltage summer). The input voltage source drives this network from the left in one direction and the op-amp drives it from the right to the opposite direction so that to keep its output voltage in the middle point always equal to zero (virtual ground). Thus the proportion VOUT/VIN = -R2/R1 is always valid.

This proportion is a property of the resistive network, not of the op-amp. It can be derived by applying the superposition principle:

Simple scales are a very good mechanical analogy to this electronic circuit. The ratio of the weights to the left and right of the balance depends solely on the ratio of the arm lenghts l1 and l2 ("R1" and "R2"). It does not depend on the person (the "opamp") who performs the weighing procedure.

Here is an "animated" picture of a funny game where the Actor 2 represents the op-amp behavior in an inverting amplifier: 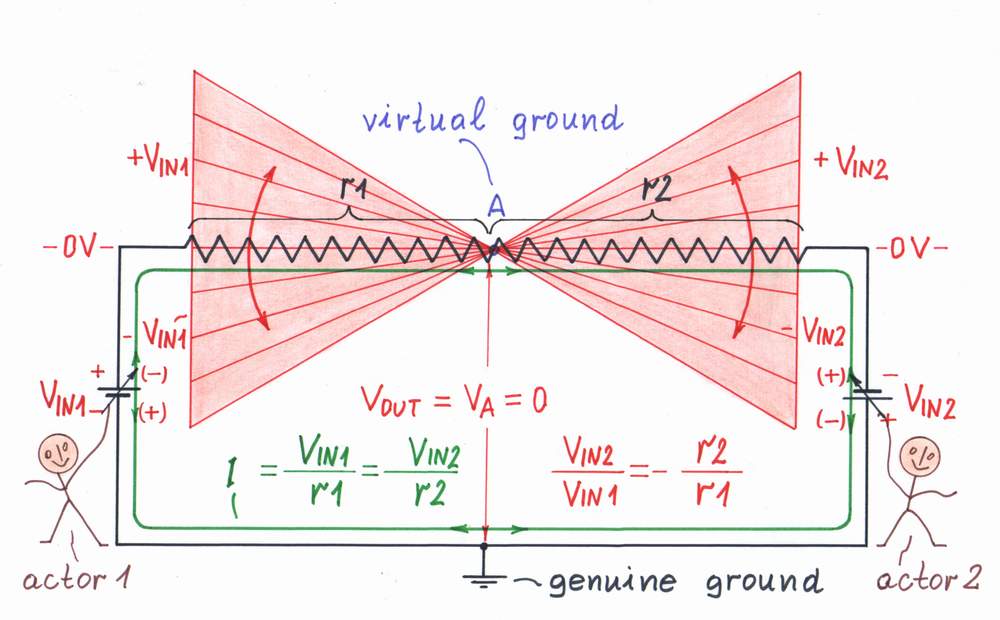 Not the answer you're looking for? Browse other questions tagged operational-amplifier gain negative-feedback closed-loop or ask your own question.

0
Closed-loop gain with source degenerated amplifier
7
Opamp Inverting Amplifier: The case of non-inverting input not being connected to ground
4
Increasing open loop gain of opamp by chaining
0
Determining Open Loop Gain of an opamp in LTspice
0
Closed-Loop Voltage Gain of Circuit Problem
6
What is the closed-loop gain in this op amp circuit?
0
finding open circuit voltage gain
4
Cannot predict closed-loop gain of this amplifier
0
MATLAB model of an op-amp's Open Loop Gain
0
Question on the close loop gain and bandwidth of this OpAmp configuration