I'm considering using this zero-cross detector circuit in a design but I'm struggling to understand exactly how Q1 is activated. The description says "Q1 turns on and feeds current from C1 to the opto via R4, whenever the mains voltage (divided by (R1+R2)/R3) is lower than the voltage across C1." I understand this, but it doesn't explain how the base of Q1 is activated. In order for the optocoupler to indicate a zero crossing, the base must be activated only when a zero-crossing occurs, so its reasonable to assume that it has something to do with the capacitor discharging, but how it actually happens is still eluding me. Can anyone venture an answer?

During this time that C1 is charging the current will flow through C1 and through D5. This will reverse bias the base emitter junction of Q1 so it will not pass any current.

For a short period at the the end of each 1/2 cycle of the incoming AC the voltage will drop to a low value and C1 will start discharging into R3 via the base emitter junction of Q1. (The emitter will be negative with respect to the base). This in turn will cause a pulse of current to flow in the collector of Q1 through the optocoupler LED and R4 from C1 (which is still charged at this time).

These pulses will be centred on the zero-crossings of the input signal.

I am learning electronics myself and Kevin's answer confused me to the point where I was wondering what I was misunderstanding about the circuit, so I simulated it and found that my initial instincts and node analysis were actually correct. I will explain:

The following is my copy of your circuit in LTSpice, ignoring the isolation aspect, which should be straightforward, and is not what the question is about. 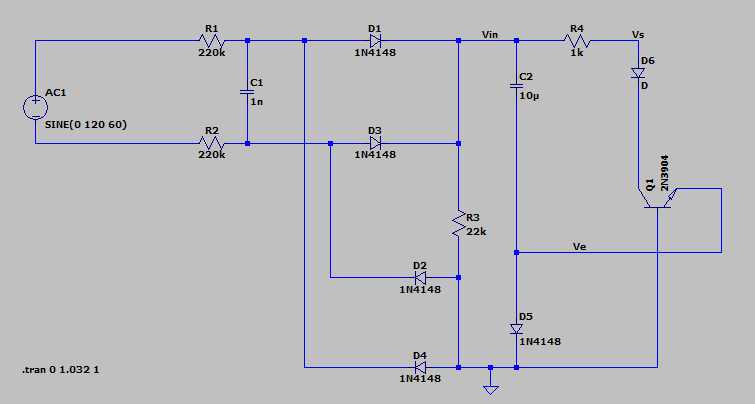 My understanding is as follows:

C1 is a bypass capacitor that serves to smooth the input to the rest of the circuit.

D1 D2 D3 D4 form a full wave bridge rectifier. This normally functions to rectify an AC voltage source into DC, but in this circuit the values of the resistors and capacitors have been specially selected to perform a different function; zero cross detection.

R3 serves to control the voltage at Vin, the south end of this resistor can be thought of as ground.

C2 is a carefully chosen capacitor that would normally serve as the smoothing capacitor for the bridge rectifier, but in this circuit it's value in combination with resistor R4 control various properties of the zero crossing 'signal'.

Here is the input signal and Vin superimposed. Note that when the input signal nears zero Vin is pulled low. This is the effect of the transistor going into its active region (explained below) and providing a path for the energy stored in the C2 to discharge through R4.

Note: I've done some math to superimpose Vin over the AC input signal so the output is clearer.

So the simulation seems to show the circuit functioning as desired.

How it works is a bit tricky, or at least I think so.

The following is Vin and Ve.

The effect of adding a diode at the cathode of C2 basically subtracts the peak voltage and then adds the diode voltage drop.

Note that Ve can actually go negative. This is the key to understanding the behavior of this circuit.

The following is a plot of Ve and the current through D5.

When Ve is going positive it hits a ceiling of 500mv or so. This is because 0.5V is the voltage in which the diode is forward biased and acts as a low resistance path to to ground. The voltage at Ve will remain at 0.5V because the capacitor is charged.

Because Ve can go negative in reference to ground and the base of Q1 is ground, Vbe of Q1 is positive which as we know will put the transistor into its active region and allow current to flow from Vc and Vb to Ve.

As the AC input nears zero C2 will drain through R3 until the voltage at Ve reaches -0.7V, and Q1 will become active as now Vbe is 0.7V. This creates a low impedance path for the remaining energy in C2 and the rest of the low input current to flow through R4 and the optocoupler (in your circuit).

This low resistance path is only available until the voltage at Vin rises to the point where the capacitor recharges and cuts off the transistor.

Here's a plot of Vin and the current through R4

Not the answer you're looking for? Browse other questions tagged circuit-analysis analog or ask your own question.

2
Help me understand this load detecting circuit
1
Confusion on relating AC ground and current direction in AC analysis
3
Understanding how current is 0A in secondary circuit of this potentiometer - misprint?
6
Phase shift near saturation mitigation in input stage amplifier -- How does this work, why does this work?
3
Why doesn't electricty flow to earth ground when I connect my oscilloscope ground clip to a floating circuit?
0
Undesired noise on isolated zero-cross
0
Confusion Between Dual Capacitor/Inductor Circuits
4
Astable Multivibrator Circuit Analysis
2
Amplifier for ADC measurement of low frequency ripple on high voltage signal
1
Newb trying to understand astable multivibrator