I know I have been asked not to provide video links and ask questions.

But I have no proper guide/mentor or anyone who can provide me better answers other than users in this site. So, please pardon me for this. I rely on this site for answers which can Solve my queries and help me with my understanding.

If you seen my previous questions, you would notice that a majority of my questions would have been related to control loop stability analysis of a dc-dc converter. I was not able to grasp the concept of zeroes with respect to electrical components. All I understood is that, If I have a pole, it means the electrical component will oscillate (at some frequency) and the system will be unstable. But what happens when a component provides a zero instead of a pole? How does one understand or find whether a component will provide a zero or a pole? What effect will that zero have in the system?

So, I am trying to learn it by watching questions and answers in this site, reading app notes, watching lectures and so on to get clarity.

I don't understand that. Can you tell me :

Please do not think that I am asking multiple questions. If anyone can provide the answer which can help me clear my doubt regarding the poles and zeroes in an electrical circuit (in simple electrical terms for a beginner to understand) and how one can figure that this component will provide a pole or a zero, then that answer would solve all my questions.

Would be really grateful.

Ok newbie, i've read your questions and comments and have a gauge of your understanding level. what classes have you taken pertaining this subject?

If you're designing a DC-DC converter for stability using bode plots (poles and zeros), you received great answers already. You need to make it a goal of understanding them.

This is a pretty good read: https://web.stanford.edu/class/archive/engr/engr40m.1178/reader/chapter7.pdf

It boils down to what another answer alluded to:

Poles/Zeros zeros have +20db/decade gain and poles have -20db/decade attenuation. You asked why in a comment? At the stage of PSU design you should have learned it, follow the math in my link. Simply, in an RC circuit, as the frequency goes up, the impedance of C will become lower and lower, and the ratio of R - C will drop/increase and this rate happens to be at 20dB/decade. Or thinking in the time-domain instead of frequency domain, the capacitor takes time to charge, so any fast changes in voltage will not be relayed with attenuation.

There is also phase. +/-90 degrees for a single zero/pole (respectively), 180 degrees for double pole/zero. The phase transitions quickly at the R+C or L+C crossover/corner frequency.

Multiple poles/zeros will have Nx20db/decade gain. so 2 pole will have 40db/decade (on average), roughly. With higher order yet poles/zeros other things come into play involving phase, and for real accuracy s-diagrams are needed. This link describes them in great detail: https://web.mit.edu/2.14/www/Handouts/PoleZero.pdf It's not critical to understand this all for PSU design, as it's usually a combination of passive poles or at most a 2 pole LC, but it's good to understand the basics.

With this information you should know how to draw a bode plot. Good link: https://pages.mtu.edu/~tbco/cm416/bodestab.html

Intuitively, this means a pole "slows down" the response of the system, because higher frequencies are attenuated. This often, but not always, has a stabilizing effect. A real-world example of a pole is heating up a pot of water to exactly 90C. You can crank it on "HIGH" (high input power) but the temperature (output voltage) takes like 5 minutes to warm up. The circuits have their own physical limitations that limit their speed, described w/ poles/zeros.

By inverse logic a zero "speeds up" the response of a system, by applying gain to higher frequencies which is more likely to have a destabilizing effect. Intuitively this makes sense: if an "ideal" zero will have more and more gain as frequency increase, then at some absurd 2.4GHz I will have +100dB of gain. So any teeny tiny interference from a wifi-router will cause the output voltage to change by an incredible amount. bad.

Both poles and zeros affect phase and gain, which affect stability.

There's a final point about the gain part of the bode plot: the gain level is usually set externally by an R+C and includes factors like the gain of the amplifier, any R-dividers, and so on. It's a variable that can be changed to affect the stability, where generally lower gain will mean a slower but more stable response.

Stability Critereon Why is this gain/phase behavior of poles/zeros important?
A good read: https://pages.mtu.edu/~tbco/cm416/bodestab.html But basically, one things need to occur for sustained oscilaltions (instability): +When PHASE reaches -180 degrees, there is greater than unity gain ( A > 1V/V, A > 0dB) +Or, described inversely: when gain approaches unity (0.001dB), there is 180 degrees of phase shift

In reality, you don't want to approach anywhere near 0dB at 180 degrees phase shift, so the concepts of "gain margin" and "phase margin" as described in the link arise. As you "approach" this unstable point, you may have "DC stability" where your DC level will be correct, but a sudden shift in the DC operating point (say a step change in the load) will cause decaying oscillations at frequencies near the 0db/180degree point.

So, you asked for intuition instead of tough math about poles/zeros, I hope this helps.

To bring it to your original question, why does a C on the output cause instability? A big capacitor right at the output is an R+C zero in some converter topologies, and L+C in others.
It generally has a stabilizing effect on DC-DC converters, but can also cause instability. It depends on what this RC did to the bode-plot and whether it ruined the gain/phase margin of the converter.

Thinking about it in the time-domain, a super large C will cause the output voltage to change SLOWLY. This, like i said, usually stabilizes the output voltage, but you have to consider what the PSU system is doing. Basically, will the PSU patiently increase the current to charge the cap, or will it "accelerate" too quickly and dump huge current into the cap, overshooting. In the 90C pot of water example, you'd hope your control scheme would turn the power down a bit from HIGH as the pot of water approaches 90C, lest we overshoot and accidentally boil the water. This rationale can be applied to any aspect of the PSU, they all have bandwidth/gain--i think of it as inertia as in the pot of water. The output voltage (capacitor) can only gain voltage so fast. The inductor can only increase current supplied so fast. The amplifier only has so much gain at high frequencies. Bode plots allows us to quantify it.

There are also empirical ways to categorize a PSU (or any) control system. By applying a "Step" change to the input voltage or output load, the converter closed loop response can be characterized, and stability inferred.

Let's look at the 2 circuits he presented.

The first is with Rop and C

The denominator, D(s), contains a pole. A pole by itself is not bad. It depends. As the video explains, if you cross the 0 dB with a slope of -40dB/dec then it is unstable.

Now we are driving a capacitive load, and looking at the transfer function we can see that it also adds a pole. The previous pole, plus this new pole, causes the slope of the bode to decrease by an additional -20 dB/dec. This is now -40 dB/dec. And IF it crosses the 0 dB at this slope, it will be unstable.

So let's look at what he did by adding that additional resitor. As always, lets look at the transfer function. 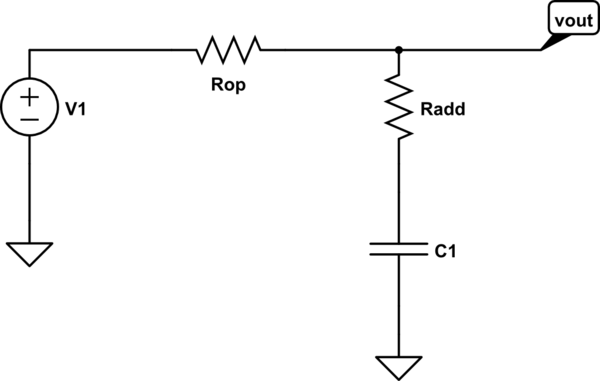 Now things are different arent they ?

With this additional resistor in a strategic location, we now not only have a pole but we also have a zero. To make things even better, the zero is located after the pole which means, at some point, we have a -40 dB/dec slope (due to the 2 poles) and then shortly after, since the frequency of the zero is not that far ahead, we increase our slope by +20 dB/dec so that our total slope now is -20dB/dec. And when this crosses the 0dB, it's stable.

[ edited to add simple example of POLE & ZERO in a circuit ]

Lets consider this circuit; the opamp in the bitmap has a RIAA vinyl compensation RCRCR network embedded in the opamp feedback element. For the schematic, examine the left most column, finding the "RIAA EQ" illustration. 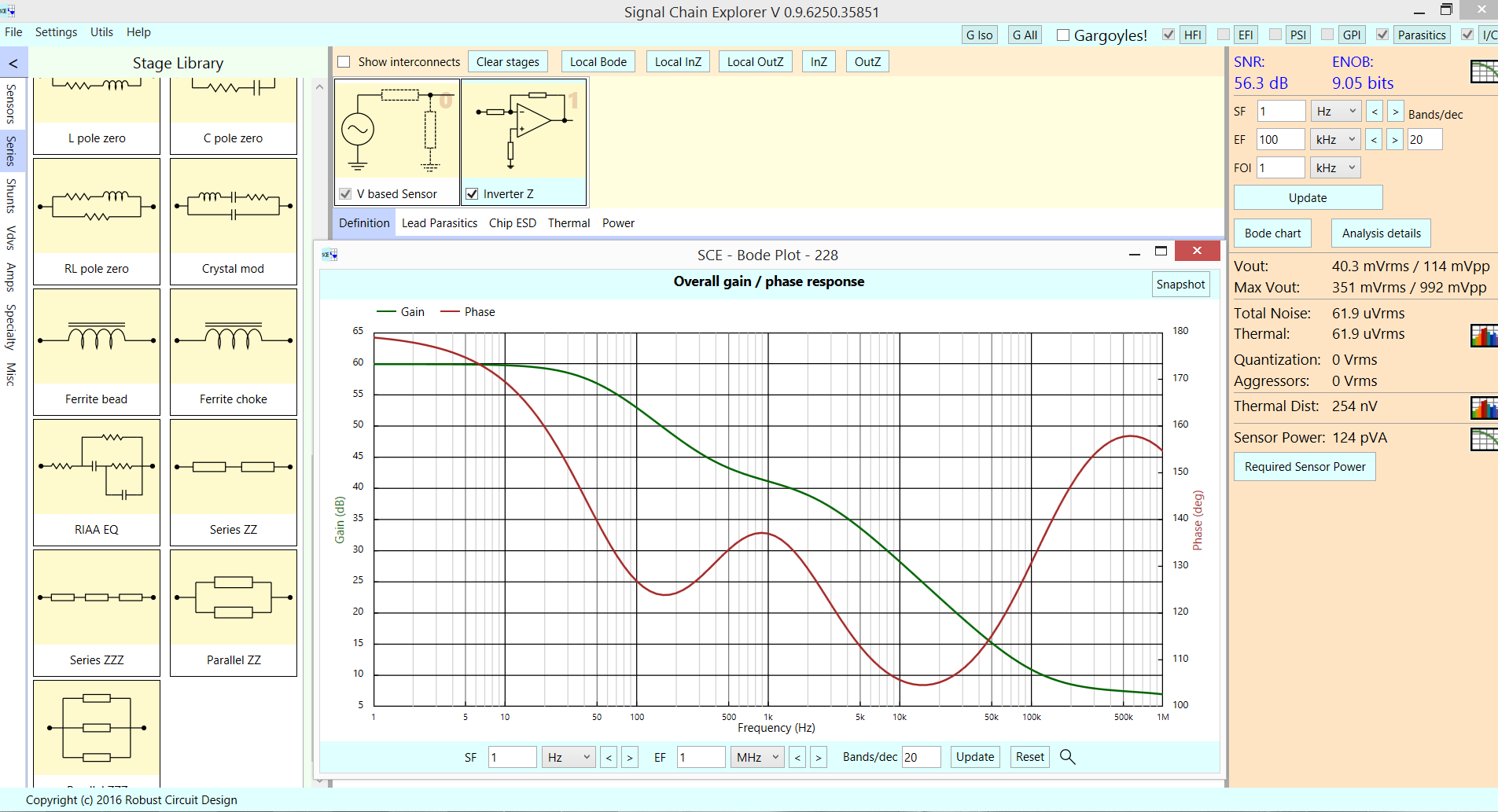 Poles will look like 1/( Frequency + J * 2 * PI * 50 Hertz) as you might notice in the gain/phase plot; the amplitude (the "gain" will be dropping as the frequency increases to the right.

The performance of this system includes a "almost flat" region for +- 1 octave around 1,000Hz, followed by another pole at 2,000Hz whereupon the Gain starts a steep decline once again.

And finally, out near 100,000 Hz the opamp's feedback network (the RIAA Equalization, which I selected from the left-hand menu, causes the closed loop gain once again to level off, forming another zero.

Again, this circuit is stable. 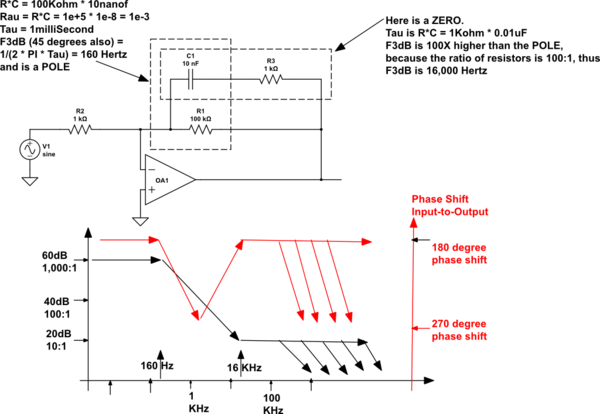 With the POLE at 160Hz and the ZERO at 100X higher, or 16KHz, the phaseshift almost increases by another 90 degrees (actually about 85 degrees) to be almost -270 degrees near 1,600Hz; above 1,600Hz the ZERO has enough effect on the opamp feedback that the phaseshift reverses the trend and heads back to -180 degrees. And notice the phaseshifts are delays, thus MINUS humbers.

Not the answer you're looking for? Browse other questions tagged operational-amplifier control-system stability capacitive pole-zeroplot or ask your own question.

0
Obtaining stability information from Bode plots
10
Meaning of zeros in transfer function
3
poles and zeroes, why the magnitude plot contradicts the actual definition
1
Stability & error from nyquist POLAR plot?
1
Bode diagram of a single complex pole and under-damped system
3
What exactly is Pole Frequency in a Filter and how does it affect the frequency response?
0
Bode Plots and Electrical Circuits - Zeroes and Poles
0
Stability of a two poles negative feedback amplifier
2
Nyquist theory - Control system - Stability
3
How to stabilize this system?