Magnetic force as a function of PWM frequency

Consider an experiement with a DC source feeding an coil with a constant DC current I. The coil with an iron core attracts a magnetic plate with mass m with force F. The force F is higher than Fm and the plate is kept in place. Now the DC source is substituted with a PWM controlled output. Say with duty cycle 50% and a DC level leading to same rms current A. What will hapen if the frequency of the PWM is increased?

A) Nothing, a PWM with same duty cycle at 1kHz, 10kHz, 100kHz or 1MHz still create the same magnetic force still lifting the plate.

B) There will be a maximum frequency where F=Fm and the plate will drop off if frequency increased further.

I'm trying to understand if sudden releases and issues never seen before in an industrial process could be related to the fact that new type of HW has increased PWM frequency from <10kHzish to ~100kHzich could be the root cause. Current levels are measured by fast clamps and at same level. Voltage at 110VDC same as before. Also very interested in the physics behind if it one would run some simulations around it. 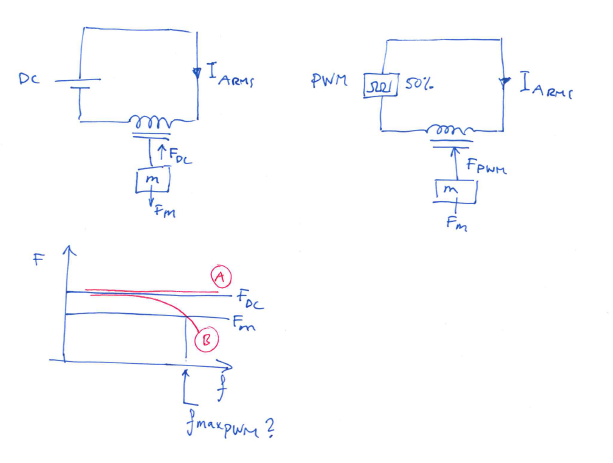 Voltage rises with f to maintain same A-rms then eddy current losses rise with thickness and frequency greatly even at 60 Hz , which is why they use thin laminated transformer steel for iron.

The loss in steel is usually measured in kW/kg depends on laminate thickness and frequency which both increase losses.

Based on the feedback given by others above I've done some more research and one can concluded that B is the correct answer. Losses increase with higher frequency (proximity losses, skin effect losses, iron core losses:hysteresis loss, eddy current loss). All are function of frequency. For simulation related questions I found good (but quite boring) webinars at quickfield.com explaining this and other related electrical related physics.

I did not find any good material yet saying frequency has negative impact on the magnetic force, but instead conclude for now that the energy fed to the system is constant and as the losses (heat) increases, the remaining energy for the magnetic force must be less. Comments or references to such material is still of interest.

Not the answer you're looking for? Browse other questions tagged pwm electromagnetism solenoid physics magnetic-flux or ask your own question.

12
How do I eliminate PWM noise when driving a fan?
1
PWM control of air core motor
0
Voltage wave form across a DC motor driven by a transistor with pwm
2
Estimate current through inductor in DC circuit with PWM control
1
Setting a simple PWM on atmega328 at certain frequency
2
How to set PWM frequency with high granuality
5
Can PWM affect a brushless DC fan given sufficient time?
0
How can a magnetic circuit with an airgap have a higher e.m.f in the secondary coil than the same circuit without the air gap?