Logic inside a 3 or 4 way light switch?

I'm trying to understand what is the logic or mechanism used in 3 way or 4 way switches, in order for all swtches to work so that no matter the position of each switch, the lights go on or off without any other switch affecting the others.

So, are they internally using any logic gate that work connecting each swtich, or is it using any kind of flip flop latch or anything like that?

Sorry for this question that might look stupid, but I am trying to learn electronics by myself and came up with this question.

The 4-way switch is simply crossing the connections, or connecting them straight through — sort of an XOR function.

If you only need two switches, just connect SW1 and SW2 directly to each other. If you need 3 or more switches, add any number of 4-way switches in between as shown.

Here is how they work; it is simplicity itself. You have 2 traveler wires. One is hot, and one is not. Any 3/4 way switch alternates which one is hot or not.

At the ends, an SPDT will do the trick.

However in the middle, you need to exchange the travelers. This is done by a reversing switch.

A reversing switch isn't quite a DPDT. But you can make one out of a DPDT by wiring an "X" connecting the non-common terminals, then attaching the wires to the one side of the "X" and of course the commons.

The usual place people get into trouble with 3-ways in household wiring is failing to properly identify the travelers. These live on the 2 "traveler" or non-"common" terminals, and in North American practice are colored brass. Notably, physical position of the terminals on the switch is meaningless; every switch is different. I like to use yellow wire or mark the wires with yellow tape. Doing so makes working with 3-ways easy; failing to do so makes it a nightmare. Most homes are wired in cable, and so you get a box with a 3-way and other stuff going on, and you have 9 wires with every one being black, white or red. What a tangle! 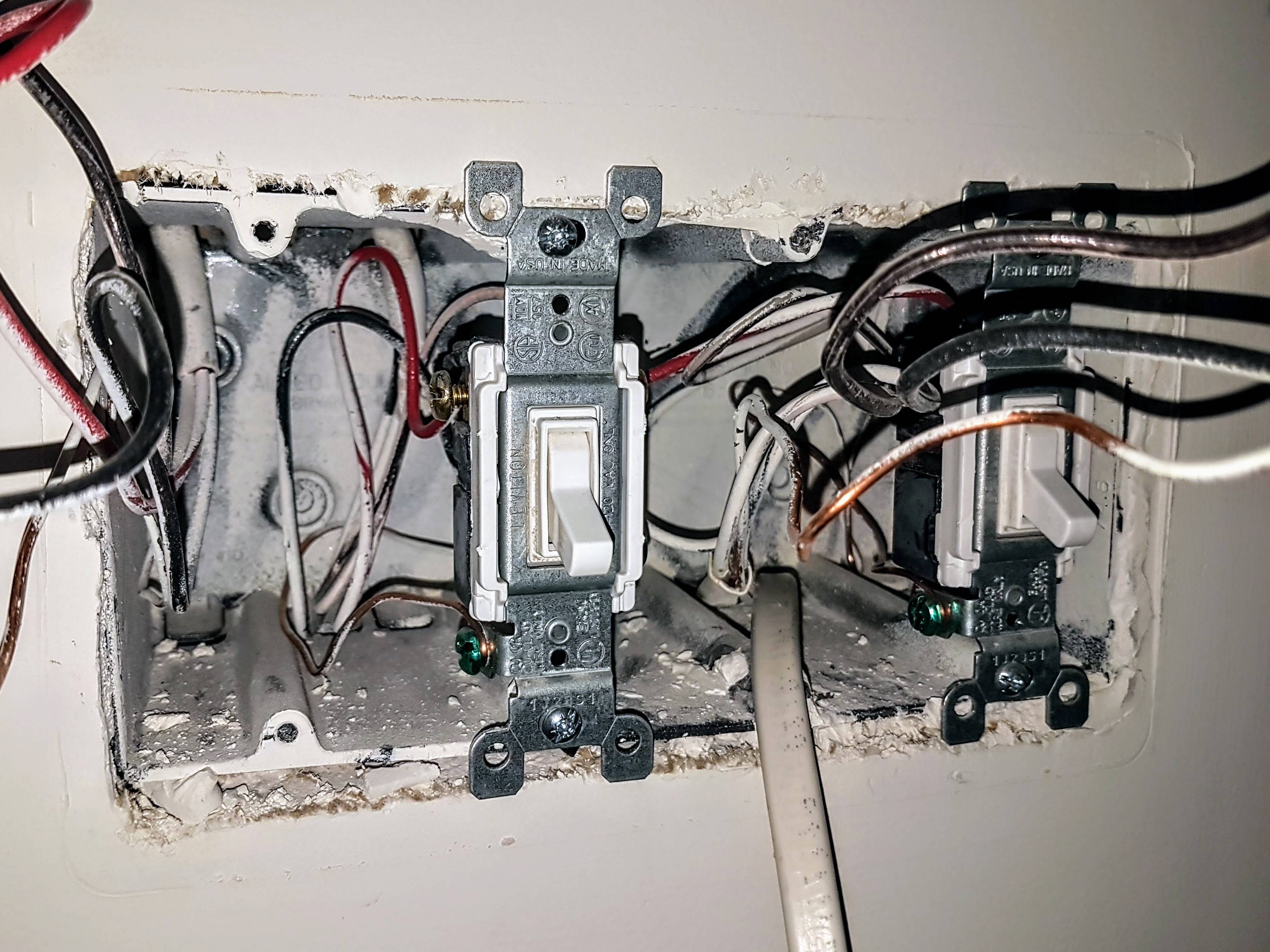 man, I really shoulda marked those travelers with yellow tape...

There are two main wiring arrangements that can be used to control a light from multiple locations.

The first system and the easiest to understand is the system described in Dave's and Harper's answers. The permanent live is fed into the common terminal of one switch, the live to the light is fed. from the common terminal of the other switch. The other terminals of the switches are connected together by the "travellers". If the two switches are switched to the same traveller the light is on, if they are switched to different travellers the light is off.

To expand to more than two locations we use what American electricians call a Four way switch and British electricians call an intermediate switch. This swaps the travelers over and can be used to extend either of the above two systems.

There is also a third system, known by american as "Carter 3 way" but it is dangerous and should not be used. In this system the switches are used to switch between live and neutral. If the light gets two lives or two neutrals it is off, if it gets one of each it is on. This arrangement has several safety problems. Firstly it can leave the light "off but live". Secondly depending on the switch design it can lead to arcs between live and neutral. Thirdly in the case of ES lampholders it can leave the shell of the lamp live.

* Americans use the term "two way switch" to reffer to a simple on-off switch.

0
momentary to on/off switch for 12v
0
Toggle state between two circuits with two momentary switches
3
How do I cause one switch to "lock out" other switches in parallel?
3
Switch logic circuit
0
What's the best way to debounce a slider switch?
0
Maybe a JK latch? Need some help
0
Help identifying circuitry diagram
0
Series of switches controlling two circuits