Why does this capacitor shorten the clock pulse?

I am trying to understand more about electronics. To this end I started studying the Ben Eater videos. Brilliant. But there is something I don't understand about this circuit. Specifically it's to do with the reason why that capacitor will shorten the clock pulse.

Link to a video that shows the capacitor. You can fast-forward to 3:19 to see it.

Another video where he's got the clock pulse up on the oscilloscope. This may be seen at around 9:21.

Why does the voltage after the capacitor slope down like that, and then stay low? It's as though the capacitor's resistance increases to infinity as it charges, but that can't be right. Otherwise I'd expect the inverse when CLK goes low and the cap starts to discharge and release its pent-up energy somehow.

To understand intuitively the operation of this CR differentiating circuit, think of the capacitor as of a kind of "rechargeable battery". So two voltage sources are connected in series... and this "battery" of two voltage sources is loaded by the resistor R.

1. Initial zero input voltage. Assume that initially there was no input voltage long enough and the capacitor is fully discharged. So there is no voltage applied across the resistor... and there is no current flowing through it...

The capacitor quickly charges... its voltage increases thus increasingly hampering the input source... and the voltage across the resistor (the output voltage) decreases. It is an interesting situation - the input source supplies the capacitor "source"... but the latter opposes it... and finally completely neutralizes its voltage (as in the proverb, "Feed a dog to bark at you":) The "battery" consists of two equivalent but opposing voltage sources. There is no current flowing... there is no output voltage.

3. Zero input voltage. The input voltage drops sharply to zero (short connection, not open circuit!). The capacitor "anti-voltage" cannot change immediately... and is equal to the previous input voltage. There is only one acting voltage source - the capacitor... its voltage is applied through the input source (short connection) to the resistor and appears at the output (forming the negative "tip of the "needle"). The current flows in an opposite direction... and the output voltage is negative...

The capacitor quickly discharges... its voltage decreases up to zero. There is no current flowing... there is no output voltage.

As others have mentioned in the comments, the circuit you are looking at is called a differentiator.

The differentiator makes use of the properties of a capacitor to mimic mathematic differentiation.

Capacitors are (more or less) "transparent" to changes in voltage, but "opaque" to constant voltages.

That is, a changing voltage will cause current to flow through the capacitor.

It is as you suspected: the capacitor sometimes acts like an open circuit, and sometimes like a low value resistor.

There is in fact a mathematical expression for the resistance (or, rather, impedance) of a capacitor for a given frequency:

A differentiator is also a high pass filter.

This circuit from the Wikipedia "High pass filter" page is the same as your differentiator: 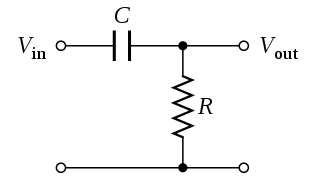 The wikipedia page on square waves has a nifty animation of building a square wave from many sine waves:

If you imagine leaving out the low frequency parts (the wider sine wave at the beginning) then you can see how a high pass filter can result in the spikes that a differentiator makes out of a square edged clock.

Note that the differentiator can only make spikes from a square wave.

If you need short spikes from a signal that looks like a sine wave, then you must first make a square wave out of it and then run it through a differentiator.

The fundamental equation of an ideal capacitor is.

Where \$\frac{dv}{dt}\$ is the rate of change of voltage with respect to time. Note that the steady-state voltage does not appear in this equation at all. Under conditions of un-changing voltage no current flows in an ideal capacitor. Equally the voltage across an (ideal) capacitor cannot change instantaniously, since such a change would require infinite current.

So lets say the circuit is in steady state, then the input goes instantaniously from 0 to \$V\$. The voltage across the capacitor cannot change instantaniously, so initially all the voltage is dropped across the resistor. That means inititially the current is \$\frac{V}{R}\$

When the incoming clock returns to zero a similar thing happens. The voltage across the capacitor cannot instantaniously change, so the output voltage becomes negative, before again decaying towards zero.

10
Capacitor behavior in oscillating circuit
7
Simple transistor & capacitor circuit question
6
How does this circuit diagram work?
1
Why do RC circuit voltages decay *slowly* rather than instantly?
3
What actually happens in a RC circuit?
10
Capacitor connected directly with battery
0
Simplest shift register test circuit - clock
7
Why is this clock signal connected to a capacitor to gnd?
7
Why does this rising edge detector using a capacitor and a resistor work?