In The Art of Electronics, chapter \$2\$:Transistors, page \$65\$, the author defined the input impedance \$r_{in}\$ of the emitter follower below 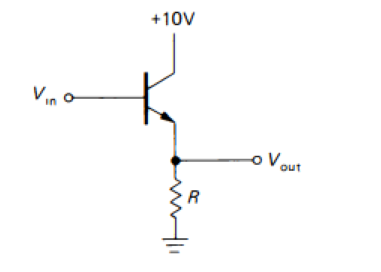 I thought the input impedance was defined as the input voltage \$V_{in}\$over the input current \$I_{in}\$, what am I missing?

For a transistor/diode, there a dynamic resistance that has a highly variable slope. A diode with a forward voltage of 100mV might have a resistance of 1MΩ, while at 1V it might have a resistance of 10Ω (random numbers chosen, but the general magnitudes should be relatively correct). The problem now is that resistance is very non-linear, which we don't like for many reasons. Thus, a small signal model is used, where the input voltage is changed a small amount, and the current is measured at 2 points. This change in current for a given change in voltage (slope) is the roughly the of the resistance at that biasing condition.

In essence, resistors have constant slopes for voltage versus current, and voltage over current (slope) is equal to resistance. Transistors have a changing slope, so the resistance must be approximated at a given point with dV/dI.

Often the differential impedance (\$\frac{dV}{dI}\$) is more important than the crude resistance (\$V/I\$).

For example, in a single transistor amplifier, after we've calculated the operating point, often the next thing we want to do is find out how it will respond to AC variations around that operating point. To do that, we need to know the differential input impedance, no the crude resistance, at the input.

Not the answer you're looking for? Browse other questions tagged transistors input-impedance emitter-follower or ask your own question.