I'm looking to use the TPA6138A2 to ground-center, LPF, and amplify 2 PWM inputs (between 0 and 3.3 V). My desired LPF cut-off frequency is 18 kHz and I would like to use a digital potentiometer for volume control (I was thinking a 10 kΩ potentiometer should do the trick).

What R and C values should I use with respect to the passive components shown in Figure 10 found in the data sheet (TPA6138A2) for my application? 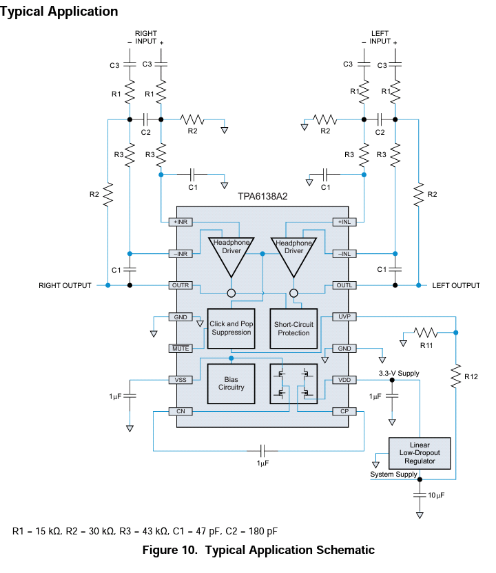 You will need to look into designing filters. The TPA6138A2 can be treated like an opamp.

Design your filter using any method you like, and implement it using the TPA6138A2.

Several audio DACs used today require an external low-pass filter to remove out-of-band noise. This is possible with the TPA6138A2, as it can be used like a standard OPAMP. Several filter topologies can be implemented, both single-ended and differential. In Figure 8, a multi-feedback (MFB) topology with differential input and singleended input is shown.

It doesn't work properly on my phone, else I'd have posted a suggested circuit for your requirements from the TI filter designer.

Not the answer you're looking for? Browse other questions tagged amplifier low-pass component-selection texas-instruments or ask your own question.