Does driving a speaker with a DC offset AC signal matter?

Do these two input signals have different effects on a speaker? 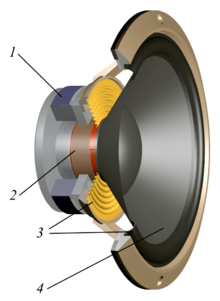 A DC component in the signal will cause:

There is no modern (read: solid-state, no transformer at the output) audio amplifier that doesn't leak at least some DC. It may be in mV range for a 100's W rated output at 4 or 8 ohm, but is measurable even when there is a capacitor at the output (it is usually electrolytic and usually leaks some dc).

Keep in mind that some high power low frequency speakers actually need the movement in order to cool its coil. A 100W rated "woofer" will probably burn from as low as 5W DC.

The other answers regarding wasted power and shortened travel of the cone are also pretty much true.

Edit: important to say, we are talking about the traditional speaker consisting of a coil glued to a cone and a permanent magnet. Piezo, for example, is way more tolerant to DC voltage (it still can be burnt or pushed outside of it's linear operation, but you have to try harder and apply a lot of DC, generally above the AC rating of the device).

Edit2: It is perfectly acceptable and widely used to drive a small and rarely-used speaker (like an interface beeper) with AC + DC (actually, turning it on and off with the frequency needed, so it gets either Vcc or 0). Just remember to leave it in "off" state when not needed or the the battery will go down. The speaker gets roughly Vcc/2 DC + Vcc/2 peak AC - as inefficient as it gets, but the beeping should be rare and short anyway. You can even use PWM or some A class amplifier and out some complex sound this way - that's how some kids toys speak and play music. In these cases, your "amplifier" is really simple - a single transistor connected to some GPIO of the controller.

This is also how the early wired telephones worked - generally, a speaker and a microphone (graphite, so it needs DC bias) connected in series. The DC bias for the microphone goes thru the speaker, but the speaker is designed to tolerate it. (Actually, no design efforts were ever made - these speakers operated well below their thermal limits and no one really cared about the sound distortion).

Not the answer you're looking for? Browse other questions tagged speakers dc-offset or ask your own question.

0
Audio amplifier design problem
-2
Can a speaker be driven by a DC signal?

0
Easiest way to generate 25V speaker signal
0
Voltage divider with offset
0
How to get raw emg signal without offset
2
Feed a speaker only with positive voltages
0
Does this Sallen and Key filter work on a single supply and does the input offset matter?
0
Driving an audio speaker design questions
1
Large signal with DC offset matching to ADC with input centered around 0V
0
DC offset before signal being fed into an instrumentation amplifier from a bio potential source
0
Right approach to boost the current of a signal to drive a speaker