How can I estimate the minimum beta for this driver to work in hard saturation?

Imagine I build the below LED driver circuit where I know all the component parameters such as 2V LED forward drop and resistors and Vcc and Vbb as in the following diagram: 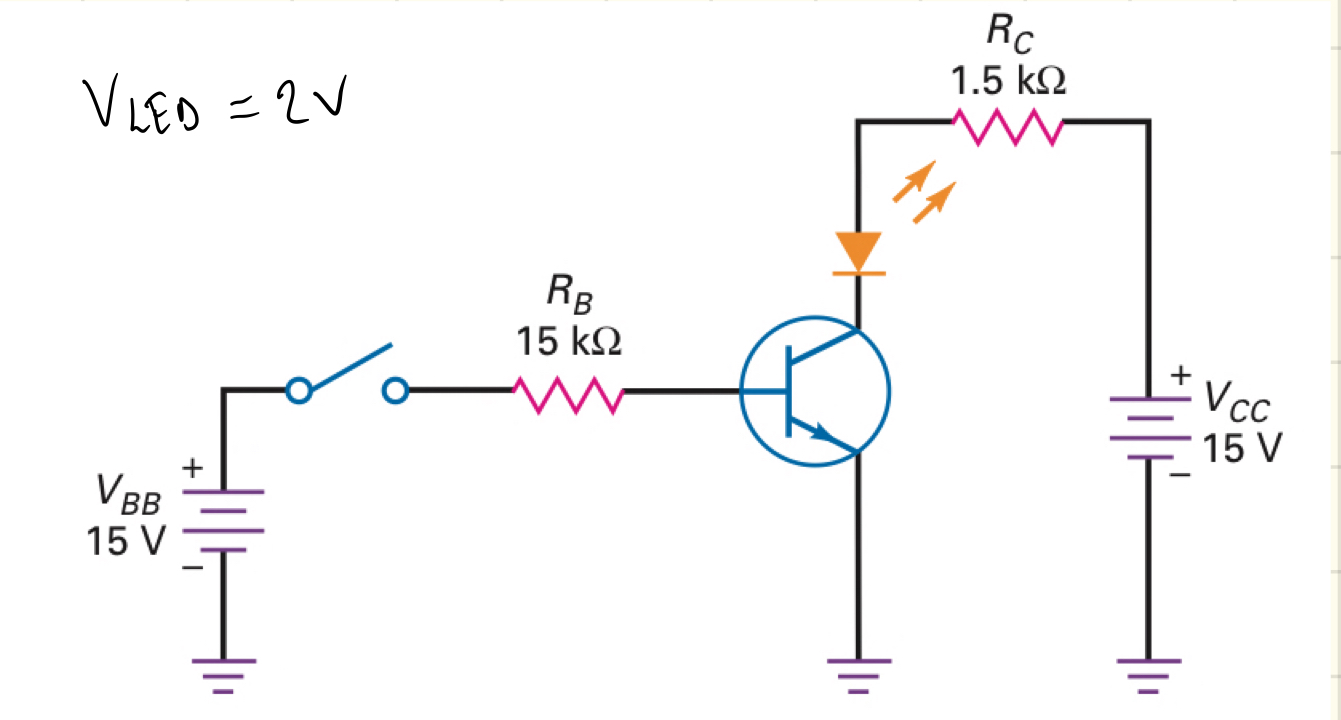 And if I only dont know the beta of the NPN transistor; how can we estimate the required minimum beta for hard saturation?

In hard saturation Vce will be zero? So Ic= 9mA.

Does that mean a beta of 10 suffice for hard saturation??

Let's start with your circuit and play around with it a little bit. Beforehand, let's create a "model" for the LED. Not a complex one. Just a really simple one. But one that is complicated enough to highlight a few ideas.

Now, let's take your circuit with two resistors and discuss it in several circumstances:

Next towards the right is still a circuit that is saturated. Again, a simple calculation would suggest (if it weren't saturated) that the voltage drop across \$R_2\$ would be \$20.9\:\text{V}\$. And again, we know that's impossible. So the circuit must be saturated. A simplistic estimate of the current (without the fancy LED model mentioned above) would be \$I_\text{LED}=\frac{15\:\text{V}-2\:\text{V}-200\:\text{mV}}{220\:\Omega}\approx 58.2\:\text{mA}\$. But because the LED is dropping not quite \$3\:\text{V}\$ (using our fancier model), we find that the actual current is slightly less (as shown in the schematic.) Still, \$R_2\$ does closely limit the current in the LED.

The 4th case (right-most) is similar. I've just further lowered \$R_2\$ to make the point still more obvious. The current in the LED is still limited by the BJT's \$\beta\$.

Note that in the last two cases (the right-most two cases), the current in the LED depends upon the BJT's active mode \$\beta\$. Since this varies from BJT to BJT, these two right-most circuits are not managed well. The LED current will depend a great deal on the specific BJT, it's temperature, etc. So these are not "good" switch circuits.

Note also that the 2nd from the left schematic is pretty close to active mode. It's still saturated. But it's getting close to the maximum allowed by the active mode \$\beta\$ of the BJT. \$\beta=\frac{54.2\:\text{mA}}{950\:\mu\text{A}}\approx 57\$. The value of \$R_2\$ is still performing its "current limiting" function, but it's getting too close to not performing that function.

This is why the left-most circuit is considered better. Here, \$\beta=9\$ (go ahead and check.) And this design is very safe because it's a long ways away from entering into active mode. Note also that the simplified calculation for the LED current is closer here than it is in the circuit that is 2nd from the left, despite the fact that it is still a saturated circuit.

Pushing \$\beta\$ lower is usually good, when operating the BJT as a switch, because it keeps you further away from active mode. The further away you are, the better. But of course, you also have to keep in mind how much extra base current is being wasted (which adds to power, as well.) So there is always a "balancing act" here. Where exactly you decide to strike that balance is your choice.