Circuit to know when two batteries are connected to each other

I'm using a Victron Cyrix (12V 120A) Smart battery combiner to connect the starter and the leisure battery in my RV. I wanted to know when the two batteries are connected to each other, but unfortunately the device does not have any output signal with this information. What kind of circuit can I use to know this? Some kind of continuity test between the two (+) poles of the batteries?

Below there's a diagram with the connections. Thanks in advance for any feedback. 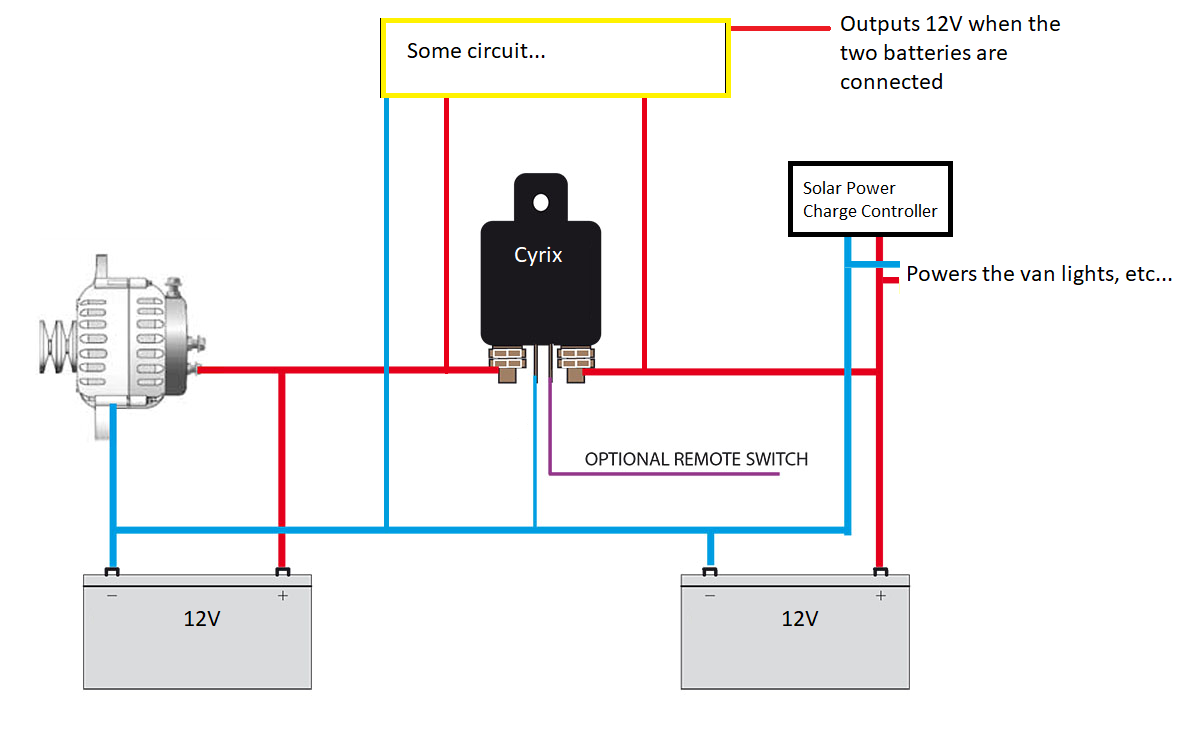 Edit: Based on the suggestion from @joribama I think that measuring the voltage of the two Cyrix poles, can be a good indicator if the two batteries are connected or not. I'm thinking about using the ADC pins of a Attiny85 to measure the voltage using a voltage divider as shown below. Since the Attiny can read up to 5.5V we can calculate that for that limit to be reached the batteries needed to have 22V, so there's a good safe margin. The 100k resistance between the positive batteries' poles and the GND result in a max current of 0.14 mA (~2mW using 14V for the calculations), which I can live with... 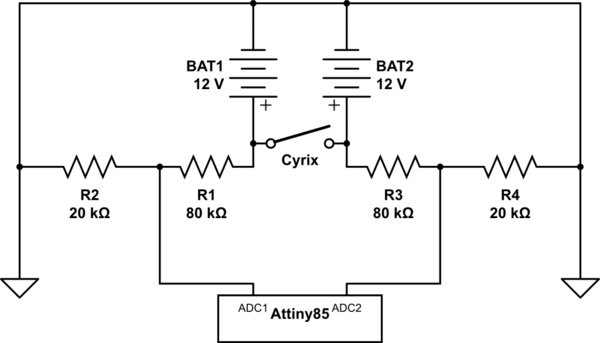 With this circuit, using the 10-bit converter, I have a resolution of around 21.5 mV (22V/1024), which seems enough to detect when the cyrix is closed. The Attiny would then turn on a LED inside the vehicle whenever the voltage difference between the two poles fall bellow a certain threshold (to be defined).

What do you think? Will this work?

I'm sorry to throwback to 1925 here, but it seems as simple as taking one of the power wires leading to the Cyrix and having it make several turns around a NC reed relay. If current is flowing through the Cyrix, the reed relay picks up. You could do the same thing with a Hall Effect.

You are looking for hundreds of millivolts of voltage difference between the two batteries. If the Cyrix has pulled in its contactor, that difference won't be there.

Note that it should take the samples right at the Cyrix's lugs. Anywhere else and you're also measuring the voltage drop to the Cyrix.

My first thought is to connect the base of a transistor to one side (through a resistor), the emitter to the other side, and the collector to common B-. When there is a voltage difference B to E, current flows on the base, and you get current flow C to E, and that lights the LED. You would need one transistor per direction, which would be fine, because with two LEDs that would tell you which way charging was going.

Doing this negative-ground is obvious; the microcontroller measures 2 voltages of Bat1+ and Bat2+, and compares them. I don't like it, though -- it requires 2 voltage measurements, and if the ADC's are off, they won't compare properly.

I would prefer to do this positive ground. The device takes its power from common Battery -. It takes one side's + as its Vss. It makes one voltage measurement, the other side's +. This will typically be no more than 2 volts, but may be negative, so it would need to be able to cope with that.

This way nicely removes the "voltage drop" problem from wiring between batteries and Cyrix.

1) Micro switch for remote monitoring = Yes ( connect to this)
2) LED status of switch ( add shielded phototransistor or remove cover to access driver switch to gnd. )
3) add gate driver detector logic AND/NOR gate to inside signals. If both FET drivers are ON then activate a switch

Since options 1,2 are not avail, consider as easiest solution. Measure Vgs on both FETs. Choose best option and maybe add a phototransistor. 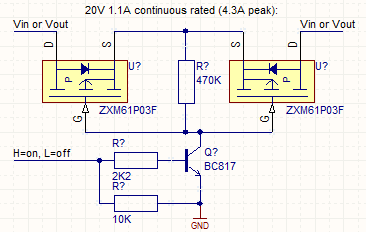 Not the answer you're looking for? Browse other questions tagged batteries circuit-design voltage-divider attiny continuity or ask your own question.

6
Is using Zener diode with a voltage divider sensible?