Why do sidebands appear after Amplitude Modulation?

AM means that the amplitude of the carrier is multiplied by the payload signal plus some offset.

The multiplication theorem for sine says

This works not only for a payload signal that is a pure sine wave but also for a whole band (any signal can be seen as a sum of sinusoids).
So as a result you get one band above and one (mirrored) below the carrier frequency.

(Note: The offset mentioned in the beginning results in the fact that also the unchanged carrier frequency will be present after AM; but I've neglected that for simplicity).

we never tried to mess with the frequency of the carrier

AM does mess with the frequency. It's a missconception that multiplication of two signals wouldn't mean messing with the frequency; that's true only for multiplication by a constant; that's a linear operation; multiplcation of two time varying signals is not. Any non-linear operation introduces new frequencies.
Simple example: frequency doubling (=messing with frequency) of a sinusoid can be done by simply squaring the signal (=multiplying by itself).

Only a constantly running sinewave that has no amplitude or frequency variations has a single frequency peak. If there is any time varying modification at all to amplitude or phase, it is not a single pure sinewave any more and so it must have other frequencies as well. If it helps to think the other way, don't think of message signal modulating a carrier, as in AM it is equal to think that the carrier modulates the message signal.

Those sidebands were there in the original unmodulated message signal.

Consider that your message signal is a 1 kHz sinewave of constant amplitude and it is multiplied by 1 volt DC. This is just a thought experiment because we know intuitively that the resulting signal is no different to the original message signal but, read on.

The 1 volt DC signal is constant and it therefore has a frequency of zero Hz. Knowing that if you multiply two sine waves you get sum and difference frequencies, the result of 1 kHz multiplied by 0 Hz produces sidebands of -1 kHz and +1 kHz.

So, we can say that the sidebands were present in the original message signal.

When modulating a real carrier (say 100 kHz) you get sidebands of 99 kHz and 101 kHz - in effect, the act of multiplying (called mixing by RF people) is to shift the baseband signals (negative and positive frequencies both) up by 100 kHz.

So now the can of works of negative frequencies is opened (another question I suspect).

I know that the mathematics works out to be like that,

And that is all you need to know. 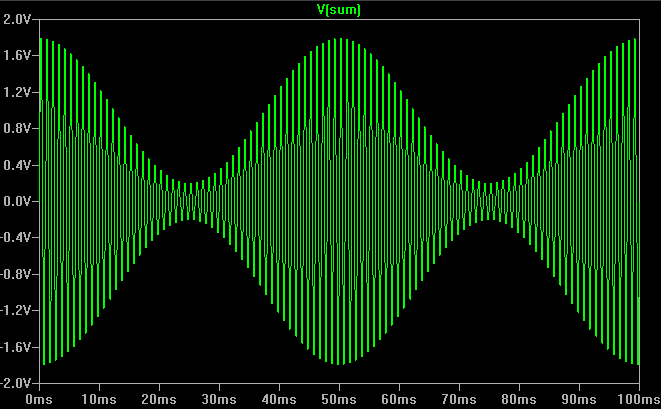 Nothing was messed with, just 3 separate waves sent down a single wire. And yet we can see a 'carrier wave' and 'modulation'.

But can we develop a circuit that reproduces that waveform without needing 3 separate oscillators? Turns we can, by simply varying the voltage of the 1kHz wave. So by 'messing with' the amplitude of the carrier wave we have created the same effect as those 3 separate waves.

Demodulating it is also pretty easy. Rather than trying to separate out one of the sidebands and subtracting 1KHz from it to get 20Hz, we can simply 'rectify' the whole waveform with a diode and filter out the carrier frequency with a capacitor (which doesn't work perfectly, but is close enough for most purposes).

Compared to other modulation schemes such as FM and SSB, AM seems complicated. But the circuits used to produce and demodulate it are simple. If that wasn't the case we probably wouldn't use it, since it makes inefficient use of both power and bandwidth.

Simply because the amplitude modulated wave can be broken down into superposition of 3 sine waves of carrier frequency(fc), (fc-fm) and (fc+fm) and in general frequency domain analysis is actually visualizing the signal by how many sinusoidal waves it is composed of.

9
Information content of amplitude modulation versus single-sideband transmission
0
Amplitude modulated wave weird display in oscilloscope
1
How does an AM-modulated signal sound like in a speaker?
0
A question related to “quadrature carrier multiplexing”
0
Amplitude modulation transmission distortion
0
Conceptually, what is the Message frequencies affect on the FM signals rest frequency
0
AM Modulator with BJT 2N3904
0
Signal multiplication in AM transmitter circuit
0
QAM modulation and link to AM, ASK, PAM