I am trying to build a bus transmitter complying to 1553 standards. Its input is a 3.3V square wave at 1MHz (CMOS data) and it has to be amplified to 10V or higher at the same frequency. The load will be a center tapped isolation transformer whose primary side inductance is around 5mH.

My current implementation involves an LT1210 current feedback amplifier which is able to amplify square wave but the catch is high current drawn from the sources (500mA) which leads to high power consumption as the datasheet suggests.

Following is my setup: 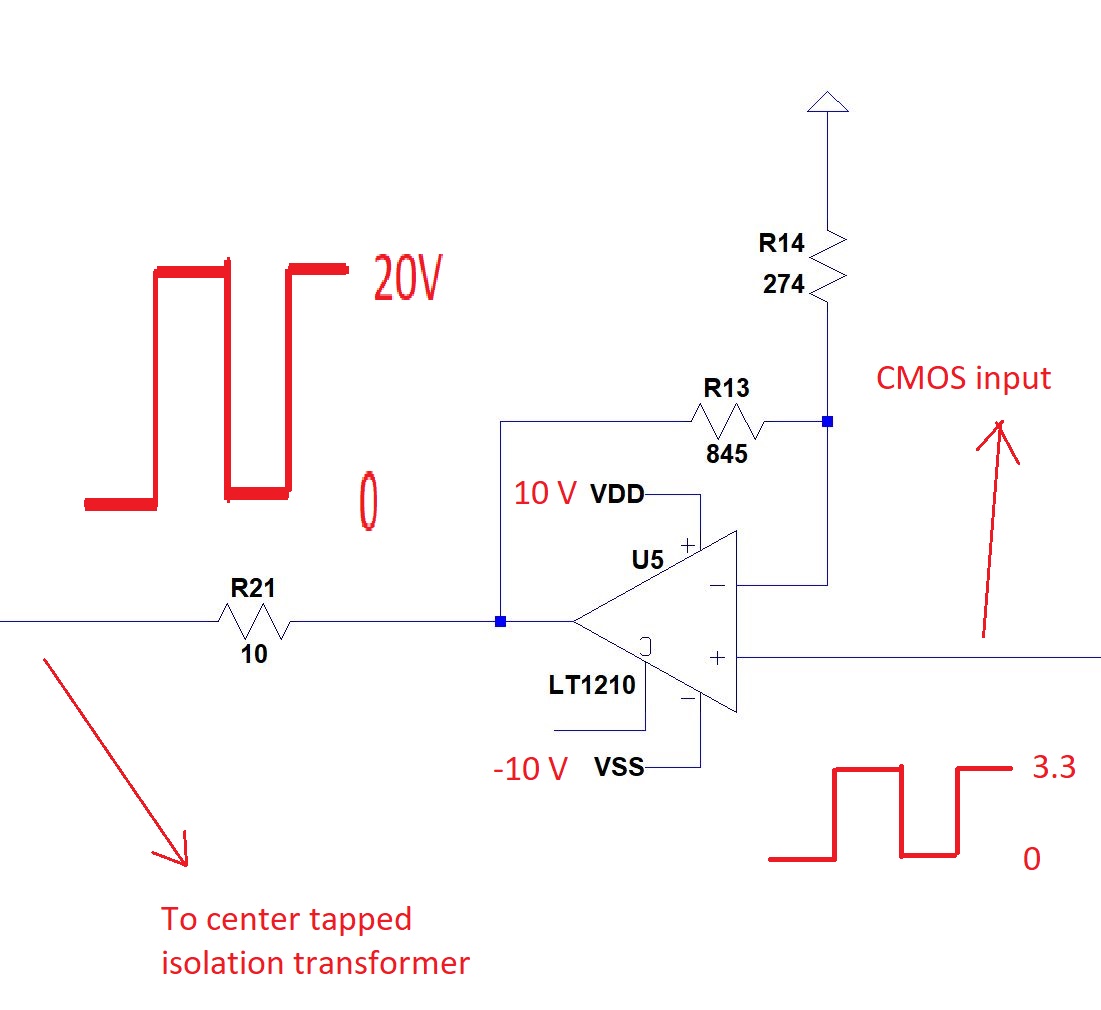 What I need to know is if I am on the right track here. Are there any other operational amplifiers available that could amplify large square wave signal and use less current at the same time, or are there any modifications that I could make on my circuit to draw less current and achieve same levels of voltage? (I clearly don't seem to need 500mA.)

P.S. This is a part of a project which is a 1553 bus transceiver analog front end. HI-1579 chip is very close to what I am intending to build.

I fear you have misunderstood how op amps work. You have overlooked the fact that zero times any gain remains zero. That is, the portion of the input waveform which has a zero value will produce a zero output.

As a result, the op amp (which has a nominal gain of 4) will attempt to produce an output from zero to 13.2 volts. Since Vdd is only 10 volts, the most you could possibly get is a 0 to 10 volt output, rather than a 0 to 13.2. However, this op amp is not what is called a rail-to-rail op amp. That is, its output will not reach Vdd or Vss. Instead, if you look at the data sheet for "VOUT", "Maximum Output Voltage Swing", you will see that with VDD/VSS of +/- 15 volts, the op amp is only guaranteed to put out +/- 10 volts. The output swing is not specified at +/- 10 volts, but something on the order of +/- 5 to 7 volts is probably a reasonable projection. In the event, you're getting 8.5 volts, so that's better than you deserve. 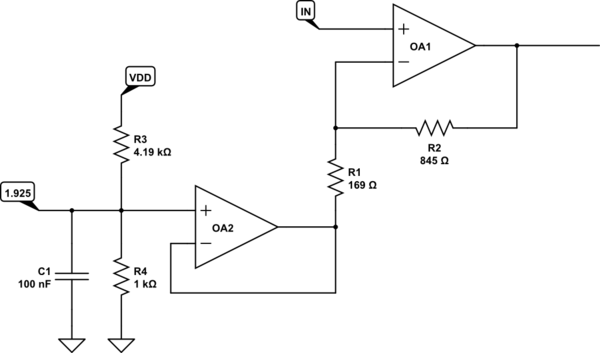 Note that the new op amp must be able to output about +/- 10 mA at much greater than 1 MHz (why?) in order not to distort the waveform, and another LT1210 would seem like an excellent candidate.

Furthermore, the output will now swing from about + 8.5 to - 8.5 unless you increase VDD and VSS, for exactly the same reason it is now only swinging to +8.5. With this op amp and these power supplies, you simply cannot expect (or even hope for) a greater output swing.

The cheapest way would probably be using a CMOS hex inverter 40106 which can be operated at up to 15V and biasing the input near below the switching threshold using a voltage divider and either AC-coupling the input signal via capacitor or DC-coupling through another resistor.
The signal will get inverted. If this is a probem just feed it into another inverter (there is a total of 6 in the IC package).
Of course it can't provide the current you need. That could be accomplished by a discrete CMOS inverter stage (discrete P-MOSFET/N-MOSFET-pair). In addition if you use two drivers, one at each terminal of the inductor (= H-bridge configuration), you don't need a center tapped inductor to create pulses of both polarities and you don't need a negative supply rail. Depending on which terminal is high and which is low you can provide the appropiate current direction. See circuit diagram below: 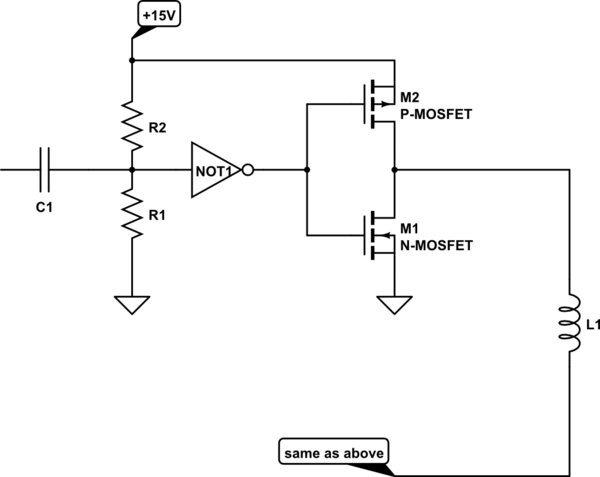 simulate this circuit – Schematic created using CircuitLab The inverter should be a 40106 operated at 15V.

Alternatively:
There are also more specialized and still cheap level converter/driver ICs like the MC34152, DS0026 or ICL7667 which could also fit for your application. I think they all can drive up to 1.5A.
In any case I recommend to build and test it first on a prototype board before manufacturing a PCB. That will be much more meaningful than any SPICE tests.

I would look at using a low-side gate driver IC, which will give you level shifting and an output power stage capable of operating at 10V or more. Also, they are inexpensive.

For example, the Microchip (nee Microsil) MIC44F18/19/20 will drive 100mA with a couple hundred mV drop, and typically draws less than 10mA idling at 1MHz.

Not the answer you're looking for? Browse other questions tagged operational-amplifier transformer analog transmitter square or ask your own question.

2
Applying an oscillation to a DC voltage?
7
Why is my negative peak detector behaving poorly?
0
Current rating of center-tapped full wave rectifier vs full wave bridge rectifier
1
What is the best way to get a sine wave from a square wave?
1
Waveform to (5V) rectangle
2
How to decrease capacitance of PIN photodiode
0
LCR circuit with squarewave input: Why does the output take a decreasing amplitude through each cycle?
0
Does waveform shape affect transformer eddy current loss as frequency changes but peak voltage is fixed?