How can there be a current without a voltage?

Recently while trying to understand inductive AC circuits better, I got very confused with a question.

Let's suppose we have a purely inductive AC circuit with ideal wires and a switch. Let's also suppose that whenever we close the switch of our AC circuit, at time \$t=0\$ our voltage cycle starts from 0 i.e. \$V(0)=V_0\sin\omega (0)=0\$

But generally we are taught that that in a purely inductive AC circuit, the current lags voltage by 90 degrees. That implies even at time \$t=0\$ we have a maximum negative current. We can also have a look at the current equation \$I(t)=I_0\sin\left(\omega t-\dfrac\pi 2\right)\$ which says at \$t=0\$ the current is not 0.

I searched and found this EE SE post but I'm still confused. I understood the energy argument put forward by user Dave Tweed's answer and I'm okay with the fact that at \$t>0\$ it's possible for either \$V\$ or \$I\$ to be 0 at times but what I'm unable to get why is there a current even at t=0 when instantaneous voltage is also 0. 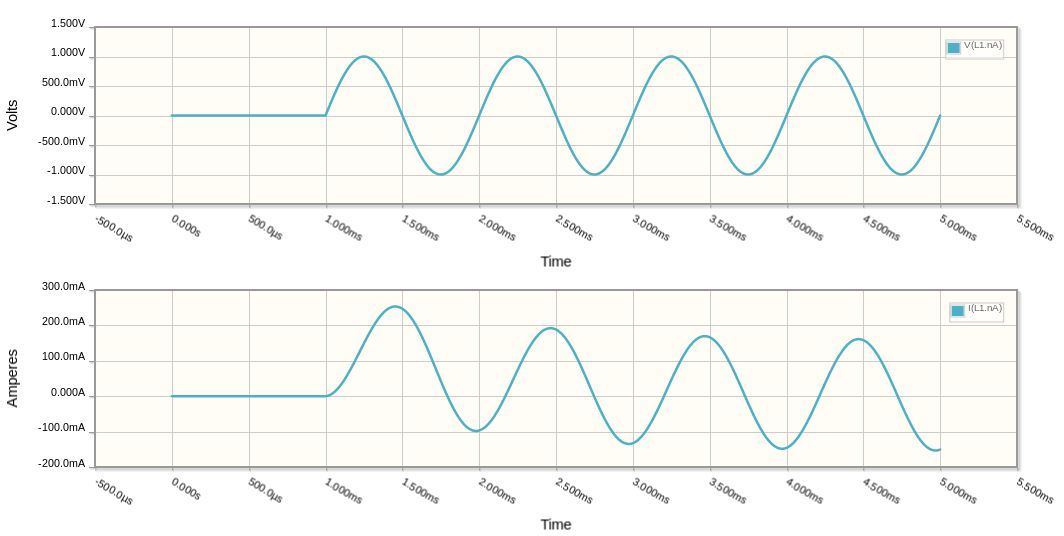 Figure 2. The resultant voltage and current curves at the top of L1.

You can see from the simulation that \$ I_{t = 0} = 0 \$. You can also see that there is a curve at the start of the current trace and that the trace is biased positive when the voltage is switched on at 0°. You can play with the simulation to try different time delays on SW1 to see the effect. You may also play with the ESR (equivelant series resistance). I added 1 Ω to make a realistic inductor as I wasn't sure how the simulator would handle an ideal one.

Remember that the 90° phase shift applies in a steady state. Switch on and switch off will be transient conditions.

You are mixing up steady-state solutions with transient solutions. The steady state solution where sinusoidal voltage leads sinusoidal current exists only after the sine wave input has been there for a very long time. That means that there was voltage just before you measure the current.

If you have an ideal inductor (or a non-ideal one made with superconducting wire) the DC current can indeed be non-zero with exactly zero voltage but that energy has to get in there somewhow, either by applying a transient voltage or by inducing it.

First what you need to understand is that the inductor always follows this equation:

This equation indicates that inductance voltage depends not on the current which actually flows through the inductance, but on its rate of change. This means that to produce the voltage across an inductance, the applied current must change. If the current is kept constant, no voltage will be induced, no matter how large the current.

And to be able to see what is going on in AC circuit I made this simplified "graph": 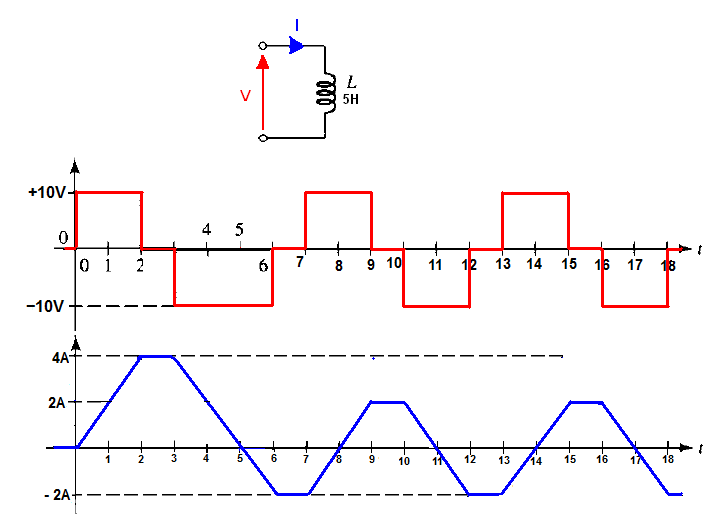 Where the ideal inductor was connected directly across the "AC square waveform". This example is easier to analysis because we can use this equation :

So we don't need any calculus.

If we plot the current and the voltage on the same graph we get this:

At the beginning (at time 0+) we apply +10V across the inductor by doing this we are attempting to cause a sudden change in the current.

However, that cannot be, because a zero rate of change in current implies no induced voltage.

In other words, the very existence of induced voltage depends on the fact that current changes, and it must change. We have a negative feedback mechanism here.

If the current changes to fast (fast rate of change) the induced voltage will be larger than the applied voltage and this will reduce the rate of change, so that this is true \$ΔI = \frac{V_L}{L}\times Δt= \text{10V/5H}\times \text{1s} = \text{2A/s}\$.

Try to think about it yourself.

And in this "phase" (from t = 0s to t = 2s ) inductor stores the energy in form of a magnetic field. We can say that the inductor is in the charging phase.

And the inductor will start to released the stored energy and this energy is returned to the rest of the circuit when the current through the inductor is ramping down (magnetic field collapses), we have a discharging phase.

And exactly at time \$t = \text{5s}\$ the inductor current is equal 0A (the inductor is fully discharged) all stored energy in form of a magnetic field was released.

But the applied voltage is still present (-10V) therefore the current will start to ramp up but this time in the opposite direction. And again during this phase, the inductor will start to store the energy in the form of a magnetic field (charging phase in the opposite direction). And this charging phase will end at \$t = \text{6s}\$ when \$Vs = \text{0V}\$.

And you can continue the analysis in a similar fashion.

But what is worth mention is the "phase shift" between the voltage and the current.

Also for the sinewave extortion, remember that the inductor will always follow this equation:

And we have this Phase shift because the derivative of sin(x) is cos(x) (shifted by 90 degrees sinewave), and the integral of cos(x) is sin(x) what a coincidence.

Not the answer you're looking for? Browse other questions tagged voltage current ac inductor or ask your own question.

8
Why does capacitor voltage lag current?
3
Voltage induced accross an inductor, conceptual confusions
0
Voltage in an inductor - DC circuit
0
Does change in current cause voltage across an inductor or vise versa?
2
Inductor with AC source
0
Inductor Back EMF Direction Relative to Changing Current
0
How can voltage be zero when current is non zero? (Single phase series circuits)
1
Intuition behind Capacitive reactance?
-1
Transient analysis of inductor circuit and back EMF
-1
Inductor behavior in DC circuit
See more linked questions

1
Full-wave rectified sine wave representation?
1
Voltage in the phasor domain
0
How can voltage be zero when current is non zero? (Single phase series circuits)
0
Why is phase of current assumed to be 0 when deriving formula for instantaneous power in an AC circuit
4
Question about ideal transformers and inductors
3
How to analize an ideal diode circuit with sinusoidal sources and storage elements (inductors and capacitors)?
4
Does Ohm's law apply in an RLC circuit?
6
Why is the efficiency of a half wave rectifier equal to 40.6% and not 50%?
0
How can an AC circuit have positive current and negative voltage?
0
Behaviour of parallel RC circuit attached to 'rectified' DC and AC voltage source