A really basic question about ammeters and their ranges

I was performing a basic verification of Ohm's law in a DC circuit experiment the other day, during my exams and I mistakenly used an ammeter with range 0-10A instead of the 0-1A ammeter that the practical manual expects us to use.

The invigilator/examiner noticed this error and told me that this is a really bad error on my part and this will not be forgiven. She cut half my marks just because of this small error(?). I retorted by saying that it shouldn't really matter, because all I am doing is just reading the current value in the circuit and the range of the ammeter used won't affect that value. She said that isn't the case and the range of the ammeter WILL affect the current reading. I didn't know much of the specifics about the working of an ammeter, so I just ignored her. I don't even care about the marks too.

All I want to know is whether the range of the ammeter affects the current reading shown by it? If possible, I also want to know how the current value is affected just by swapping it out with an ammeter of a different range.

I looked up the working of an ammeter and I found that an ammeter is just a galvanometer with a resistance in parallel (I don't understand what they mean by parallel). Maybe the resistance increases the overall resistance of the circuit and hence leads to decrease in current(?). Please let me know if my speculation is correct or not. Thanks in advance for tolerating my zero knowledge of the subject :)

Yes it does matter a little. Say you have a speedometer that is 0-1000 mph scale You also have a scale of 0 to 10 mph

You are walking 1mph, which scale would be most accurate, of course the 0 to 10.

All meters scales are like this, the 0 to 1000 would still measure but not as good as the lower scale.

We call this the shunt resistance of the ammeter.

If the circuit you're measuring has a relatively low impedance (less than maybe 20x the shunt resistance) as measured from the points you connected the ammeter, then the choice of range will affect the measured current.

But using a higher range will actually give you a more accurate result, because its lower shunt resistance will affect the measured circuit less.

(On the other hand, the result will be less precise because each step of the ADC in the ammeter will correspond to a larger increment of current)

In comments you added,

it is a digital meter

In this case, there's no actual galvonometer in your meter. But just the same, the principle is to measure the voltage across a low-valued shunt resistor. And a larger shunt resistor is needed for the lower ammeter range, leading to the same result: The higher range affects the measured circuit less than the lower range.

This was a "practical" exam?
Very many current meters dedicate a front-panel jack to the 10A scale (jack #1, below). If your range selector switch is on lower-current scales, you use a different front-panel jack (jack #2,below): 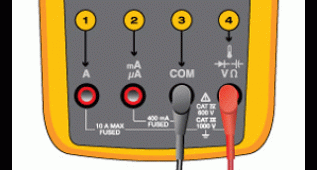 Your marker would be justified in a significant down-grade if the improper jack was used.

Not the answer you're looking for? Browse other questions tagged circuit-analysis dc current-measurement or ask your own question.

1
How to measure current in a DC series parallel circuit using a DMM?
3
Conversion of a Galvanometer to Ammeter and Voltmeter?
1
What is the significance of 75mV in available 100A current shunt resistors?
0
Current decrease in a lamp due to the change in scale of an analog ammeter
8
Under what conditions would using a voltmeter be more accurate than an ammeter to measure current?
0
How can a multimeter measure current while being parallel to the element
0
Oscilloscope range affecting voltage reading
0
Can I make a ammeter using a voltmeter and ohmmeter that would work in parallel to the device?
7
Voltage Controlled Current Source - help needed
0
Inconsistent results measuring current