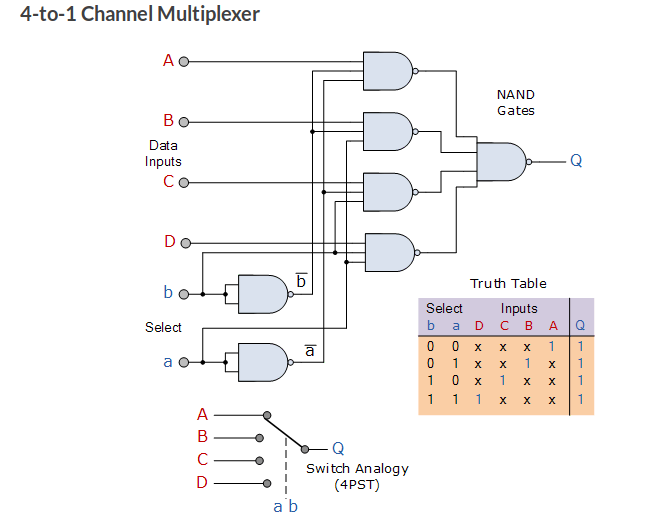 I know (I think?) that if I were to make a truth table with 2^6 variables and simplified it I'd get the same SOP as I'd get with this one. My question, how was the big truth table simplified with don't-cares to become like the one in the example? What was the thinking behind it?

The diagram seems to be a bit misleading, it would make more sense to me if the output showed:

My question, how was the big truth table simplified with don't-cares to become like the one in the example? What was the thinking behind it?

I don't think the authors started out with a "big truth table." I think they started out thinking very directly. First off, they developed \$a\$ and \$\overline{a}\$ and \$b\$ and \$\overline{b}\$ so they could form up all four permutations as inputs to each of four NAND gates. Only one of the four NAND gates would be enabled to pass along their remaining input, which are \$A\$, \$B\$, \$C\$, and \$D\$. Since these are NAND gates, their output of the only enabled NAND will be the inverted sense of its input. The rest, being disabled, will have "1" as their output. Only the enabled gate will have the inverted sense of its input at the NAND gate output.

So they figured they'd invert the outputs of these NANDs, so that the logic sense remained the same as the input, and then feed that into a simple OR gate to get the output.

I think the designers saw this in their mind's eye (except this stupid editor doesn't provide 4-input OR gates, so I had to fabricate one): 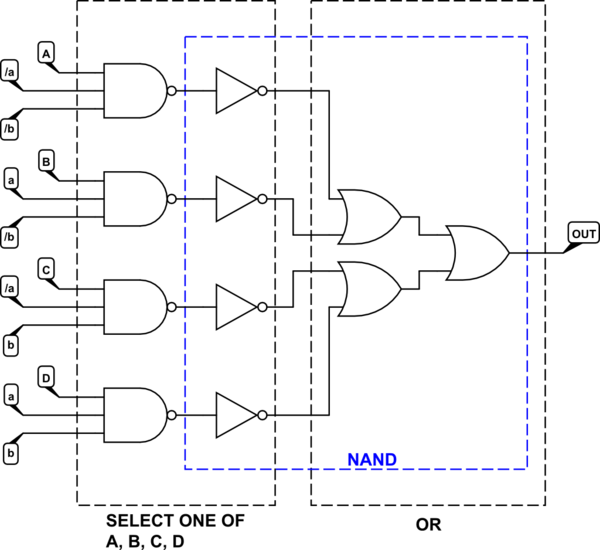 It's not complicated. And I think they didn't care if anyone wanted to write up a full table and attempt to solve it, letting others worry about that if they wanted to do so. They just knew how to write it out to get the job done without anything more than a straight-forward "do it this very obvious way" approach.

4
How a 2-1 multiplexer (MUX) work?
0
Lenient MUX and Load Signal
0
Rising Edge-Triggered Truth Tables
1
Writing Truth Table Given Function
1
How do I write this circuit (returns 1 if the number of 1s in input is odd, otherwise returns 0) using a MUX?
0
Did I implement this function with a MUX correctly?
0
Missing data in truth table and commenting on missing value