Why my current mirror results in wildly different currents?

Let me start with that I'm new to current mirrors and my idea may be conceptually wrong. Feel free to ask any clarifying questions.

I'm designing a dual "LED lamp" with very finely tunable brightness including very dim levels. The control loop for the brightness is only for a single lamp, with the second lamp added to double the max brightness possible, and this is where I use the current mirror (I want the second lamp shine as brightly as the first). I don't have the second LED string yet, so I've substituted a 5W 220ohm resistor. The relevant part of the schematic is: 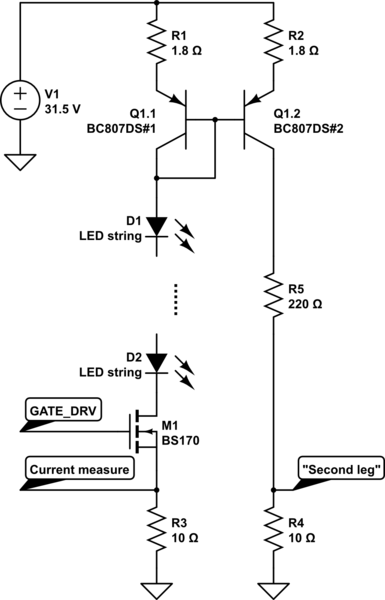 A MCU is controlling Vgs of the MOSFET, and sensing the actual current via the R3 shunt. The current mirror PNP pair is a single-package device - BC807DS,115, a SOT-457 part. The LED string is "cannibalized" from a commercial mains-voltage LED bulb. Only the LED PCB is used, where it has just the +/- terminals, and the LED string needs ~29V for full brightness.

If I slowly increase the gate voltage, to the point that the left leg conducts 5-10mA (measured at R3), the second leg starts conducting close to 100mA (measured at R4), more than 10 times more. However, if Vgs is 0, then both legs don't conduct. Also, at higher currents, the mirror sort of works, with both legs conducting relatively similar currents (yet not perfect).

Example at low currents, where the problem is most pronounced:

Left leg is yellow, right leg is cyan. Both traces are 50mA/vertical div.

At higher currents the matching is closer (about 110mA for the left leg, 130mA for the right):

Same settings for the traces.

Is a current mirror really a good approach for this task? Any idea why does mine fail so miserably? I know, of course, that you can alternatively wire both led strings in series. That would require 60+V supply which starts to be somewhat dangerous for the intended application of the device - I strongly prefer the 31.5V solution.

This transistor's hFe stays above 200 even at 100mA, so base current is not the main cause of your current mismatch.

The two transistors are in the same package, but the datasheet does not say anything about them being Vbe-matched, so you can expect maybe 10-20mv Vbe mismatch at the same Ic and Vce. So, with such a small emitter resistor, you won't get a good current matching. This will be more apparent at low current (as you noticed) -- with 5-10mA current mismatch, setting it to a low current like a few mA won't work.

Even if you could get matched transistors, their temperatures and Vce will be different, and this will cause a change in their Vbe also.

Basically, a current mirror can be reasonably accurate with high value emitter resistors and/or precision matched monolithic transistors. But in your case, that won't work.

1) Wire both LED strings in parallel, with an additional resistor in series with each string. The resistor will help balance current between both LED strings. If your LED strings have 30V Vf, consider dropping at least 3V on this resistor. You can check if the current is well balanced by measuring voltage on the resistors. This should work well if both LED strings are at the same temperature (same heat sink) so their Vf will track.

2) Use PWM ; high-frequency if you want it flicker-free.

3) Duplicate the FET, current sense resistor, and use a dual opamp (one opamp per FET) so each LED string is driven independently. This won't cost much more but it will save lots of hassles of both LED strings are on two heat sinks at different temperatures.

You are missing the base currents of Q1.1 and Q1.2: they all go through the LED string, so your mirror is unbalanced at low currents.

Not the answer you're looking for? Browse other questions tagged pnp current-mirror or ask your own question.