Im looking for a chart that helps you translates the old tube symbol into the updated format. 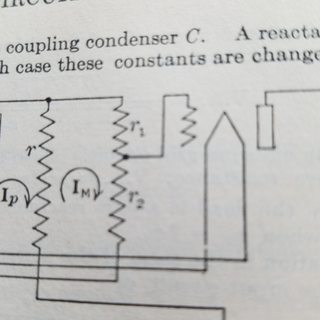 Your tube symbol is indeed ancient. It seems to be a triode having three elements:

Many modern tubes contain two triodes. Like 12AX7. They are shown with a split-open envelope. One would be titled 12AX7a, the other 12AX7b.

Tube base pin #'s are very often added to a schematic.
It is often customary to not show indirectly-heated filaments. Their wiring clutters-up a schematic diagram. Filaments are shown elsewhere on a schematic, with pin #'s and text added to show which tubes they belong to.

Not the answer you're looking for? Browse other questions tagged vacuum-tube or ask your own question.

8
Leaving the heater of a vacuum tube on all the time vs cycling it
0
How does one calculate the input impedance of a tube based preamp?
11
Is there any benefit from installing 2 resistors in parallel instead of 1 resistor?
0
What is the difference between a Barkhausen-Kurz tube and a transmitting triode?
0
How good should the regulated AC/DC power supply filter be in tube headphone amp?
1
Running vacuum tube without grid or bias voltage
0
Diode on op-amp output to drive tube
2
Tube amplifier preamplifier