Why the circuit behaves in this way? 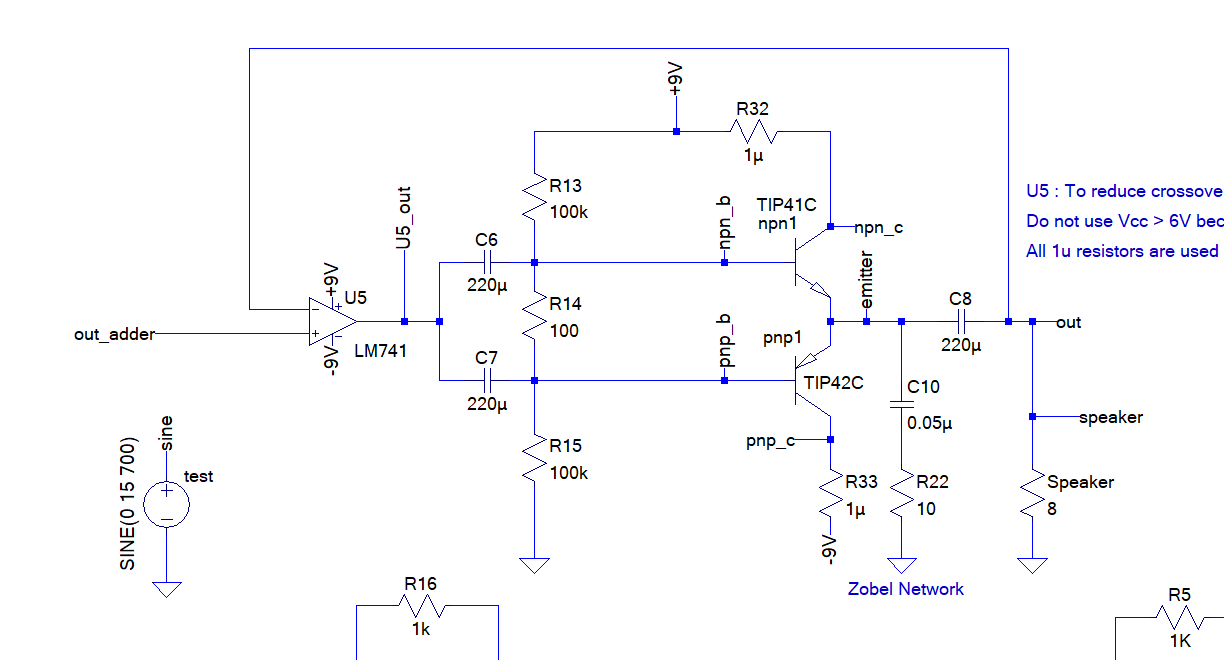 This is the view of my circuit related to the question. My intention was the opAmp will adjust its output so that the voltage on the speaker will be equal to the input waveform at the noninverting terminal of the opAmp(V(out_adder)).

Here you can see that(see red arrows), the output of U5 opAmp and the power on the transistors change while time passes and stabilizes at some level. However, this is not desired. I like circuit as when it is in its initial situation.

Here you can see the very first results in a closer look.

Here you can see the final results in a closer look. The distortions on the output of U5 opAmp result in(I assume) distortions(please focus on the peaks, there is a little bit clipping at some points which alters speaker voltage from V(out_adder)) at my speaker(load) voltage.

Why does the output of U5 opAmp changes in that way? I assume the changes in the power consumption of the transistors are tied to this change.

It's a poor design.

For more output, use Rail to Rail CMOS OP Amp with Darlingtons 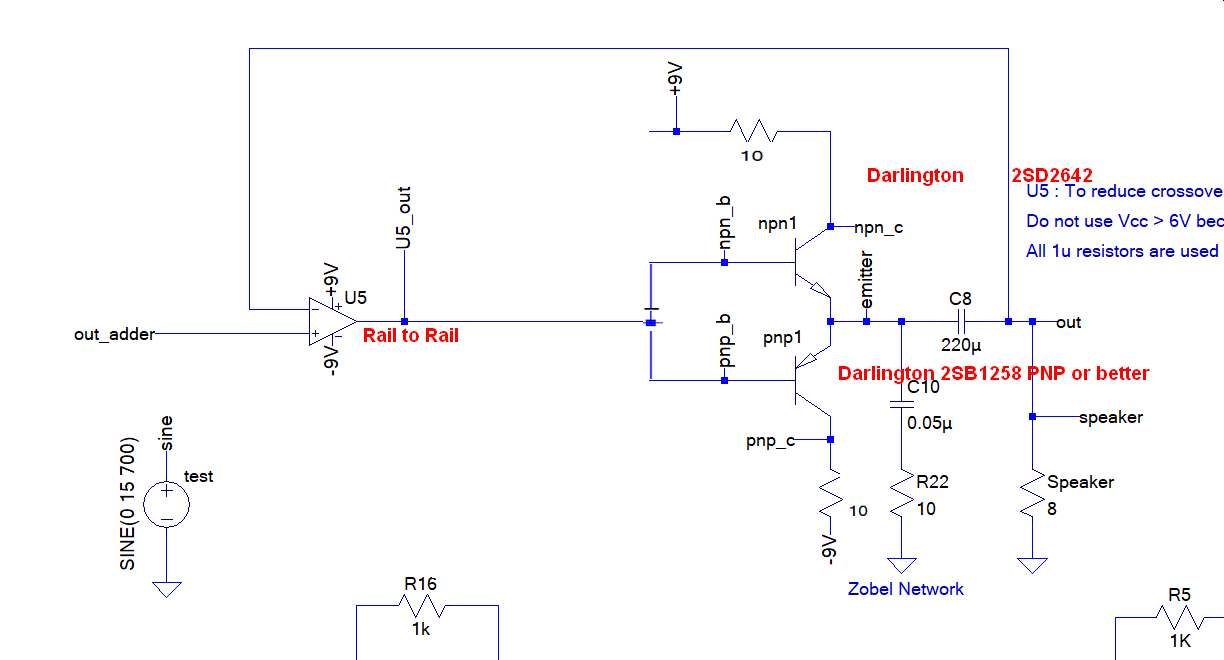 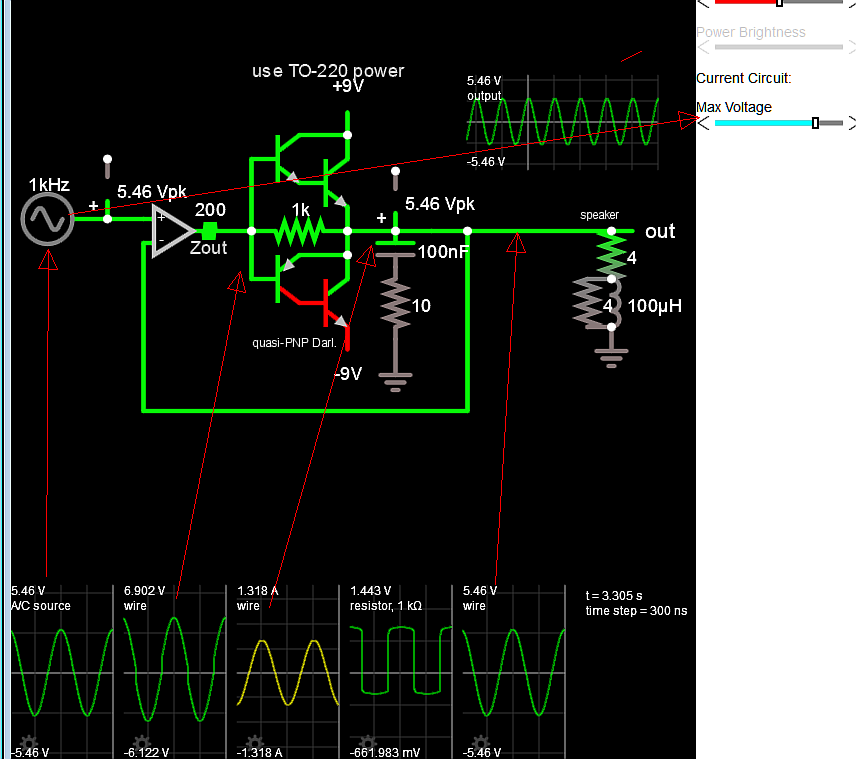 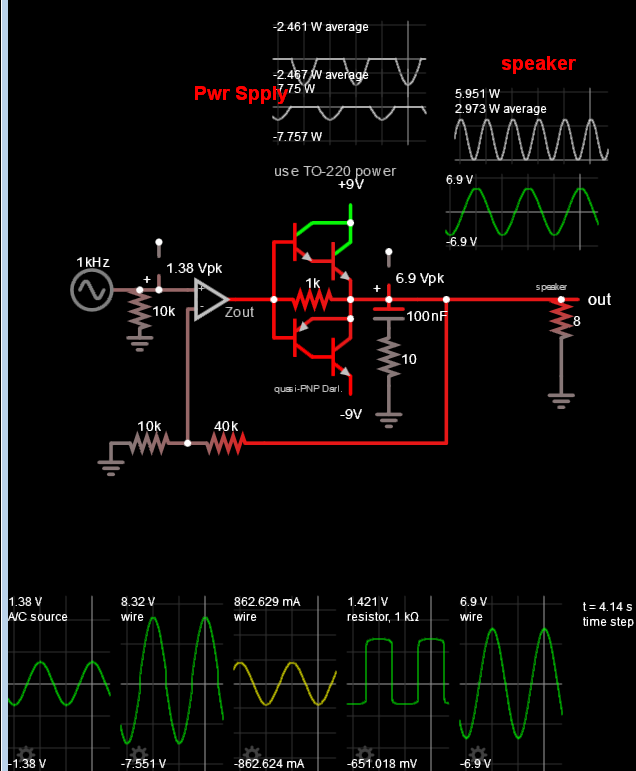 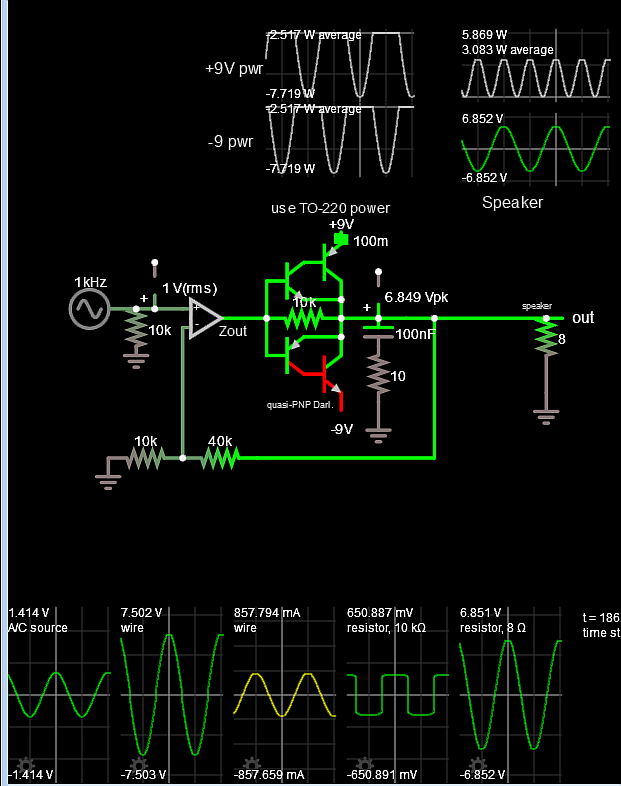 Your basic approach is OK...a linear buffer stage accepting an input signal, followed by discrete transistor NPN/PNP current amplifier of type Class-B.
If you're new to this kind of design work, best to approach it in small steps. Eventually, you can push this basic approach to a full Class AB high-quality amplifier with gain, and overall feedback.

Here, the op-amp is used as a simple buffer. Gain of +1. Local feedback only. The NPN/PNP transistor pair allows significant current gain, but has slightly less-than-1 voltage gain. This design yields significant cross-over distortion, but is otherwise reasonably linear. If you use 9V batteries, a simple Thevenin battery model is used: Vt=9V, Rt=2 ohms. Be aware that those 2-ohm resistors are not to be added to your circuit.

A generic LM741 opamp is shown. There are better choices. Be careful to choose an opamp that allows high DC supply voltages (many have a limited supply range). A better choice would be one allowing rail-to-rail output swing...you'd like output voltage to be able to approach +9V on its positive swing, and also approach -9V on its negative swing when you increase signal amplitude. The Zobel network is not shown for simplicity: 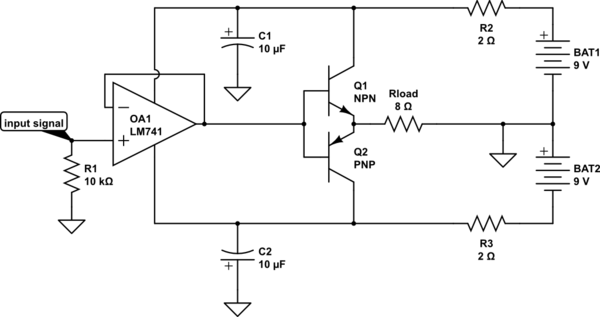 Looks similar, but the overall circuit feedback has a subtle result: crossover distortion from the Class-B output transistors is much-reduced by the op-amp. Voltage gain should now be very close to +1.0. This can actually be an acceptable circuit operating at low input frequencies. At higher frequencies, many opamps slew too slowly to properly adapt to the cross-over glitch: 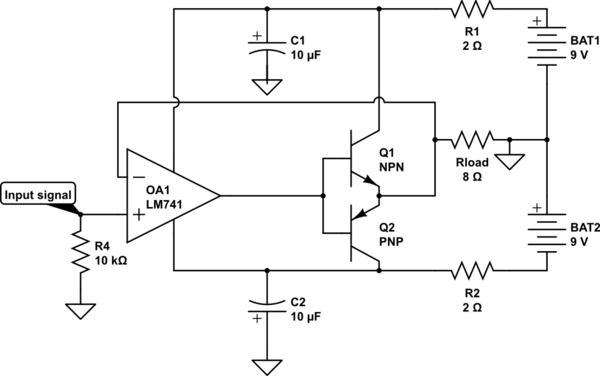 simulate this circuit
There are other ways to deal with cross-over distortion. Every one involves separating the bases of Q1 and Q1 with a DC bias voltage. This is risky, because you can add too much DC bias, which tends to overheat those two transistor with shoot-through current that is wasted (doesn't flow through the load).
Adding bias moves the output stage from straight Class-B to Class AB, and is an advanced step (not going to address it here). It is risky because most bias circuits need to be temperature-compensated. Those transistors often run hot.

With the help of my imagination and grandson's fiber pens:) I visualized the invisible electrical quantities voltage and current to make clearer the circuit operation. In this geometrical interpretation, voltages are represented by vertical bars (like water columns) in red and currents - by loops (like water flow) in green.

I have shown only the positive half of this complementary circuit; the rest part is below the sheet. I have illustrated the 2-transistor Darlington version as more sophisticated... and since it is needed here. It would be interesting to show also the 1-transistor version... and to compare the op-amp behavior in both cases. Then we can see how the "clever" op-amp increases less or more its output voltage to compensate one or two base-emitter voltages VBE. 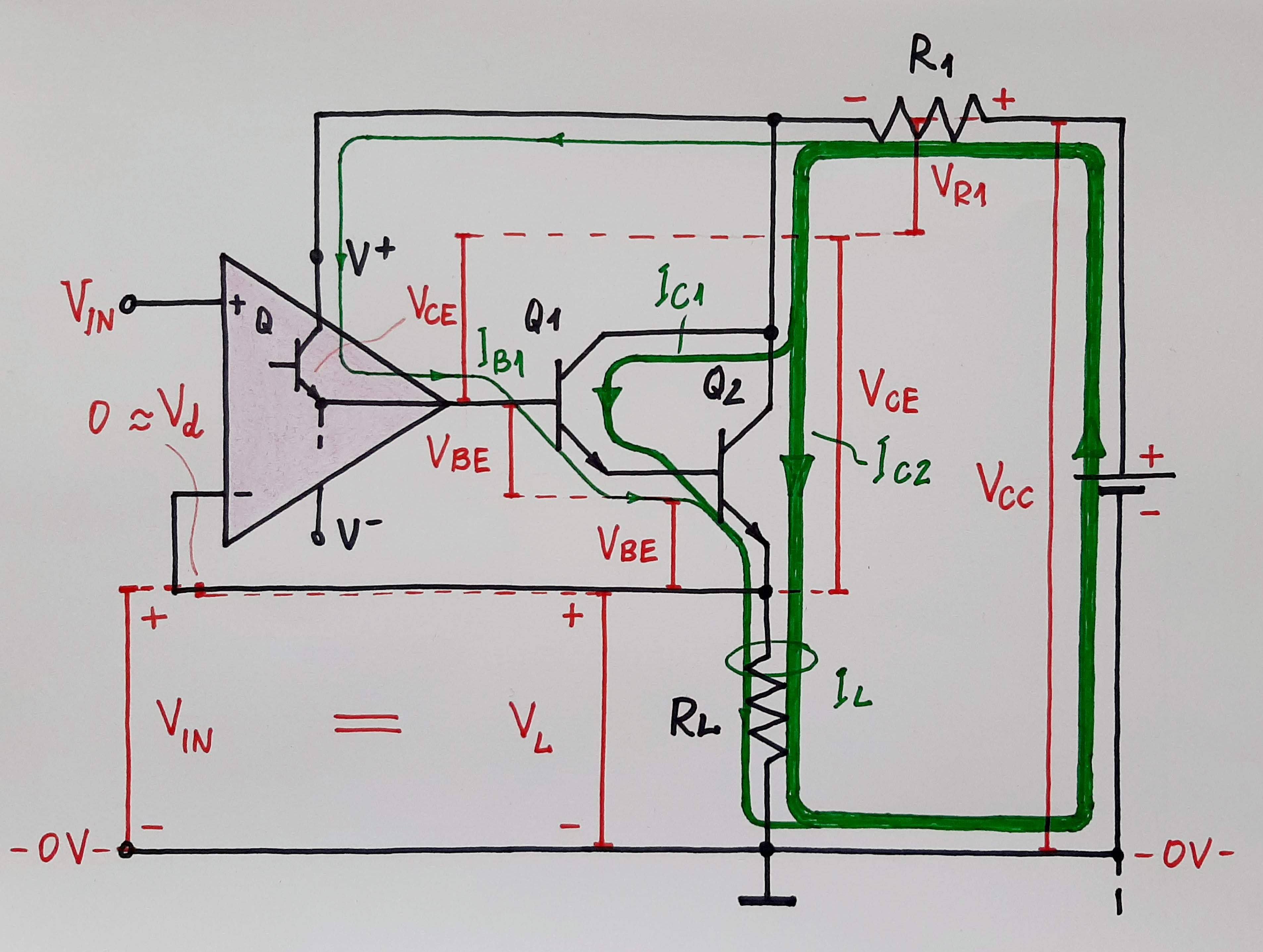 Below is a screenshot of an animated Flash movie dedicated to this circuit phenomenon. I hope administrators have nothing against to put here a link to this useful resource - Strange things can be put into feedback loop (select the transistor from the library on the left and "hide the dog" on the right:) 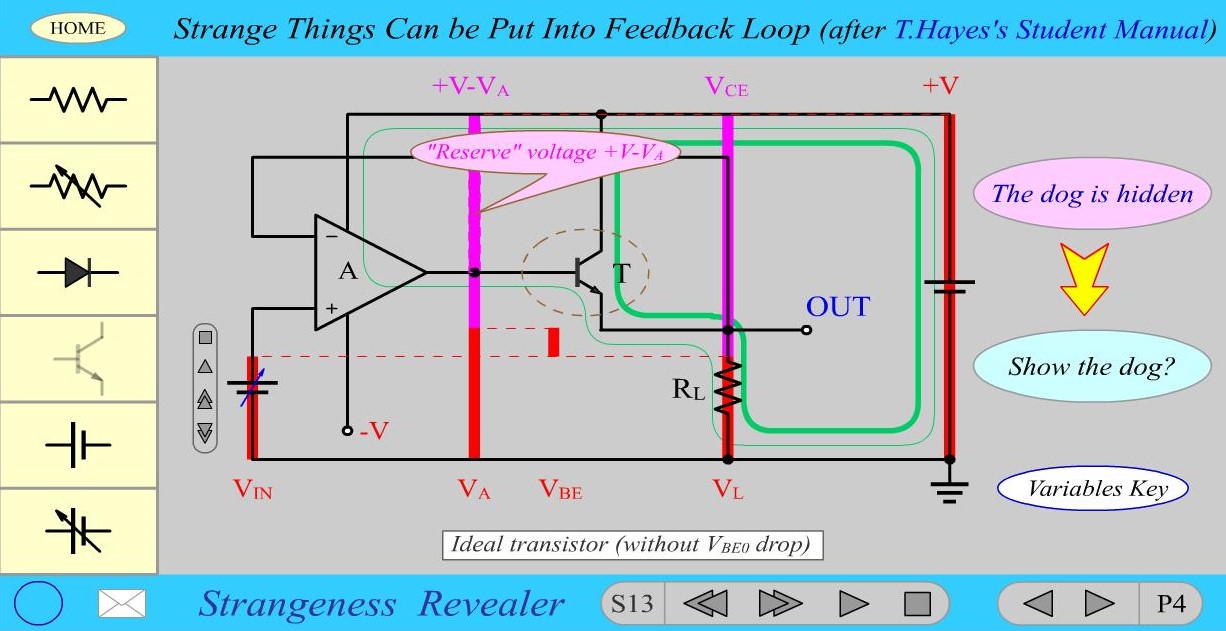 Not the answer you're looking for? Browse other questions tagged operational-amplifier transistors or ask your own question.

4
Common Emitter Audio Amplifier
2
Use interrupt to determine a change in IR detector
5
Matching transistors for discrete opamp (audio use)
1
Is this measurement of a cricuit's output impedance valid?
1
Beta reduction capacitor in Sziklai Pair speaker driver
0
Op amp phase shifter with unity constant gain - How does this circuit shift the phase between -180 and 0?
0
How can I determine whether this is a “rail to rail” opamp from its datasheet?
2
OpAmp choice and circuit configuration for DAC amplification to speaker
4
Strange opamp's output impedance in spice