Can we present the current-driven BJT as two cascaded non-linear converters?

In the simple BJT current mirror, two non-linear converters - inverse (log) and direct (antilog), are cascaded. As a result, a linear relationship between the output and input current is obtained. 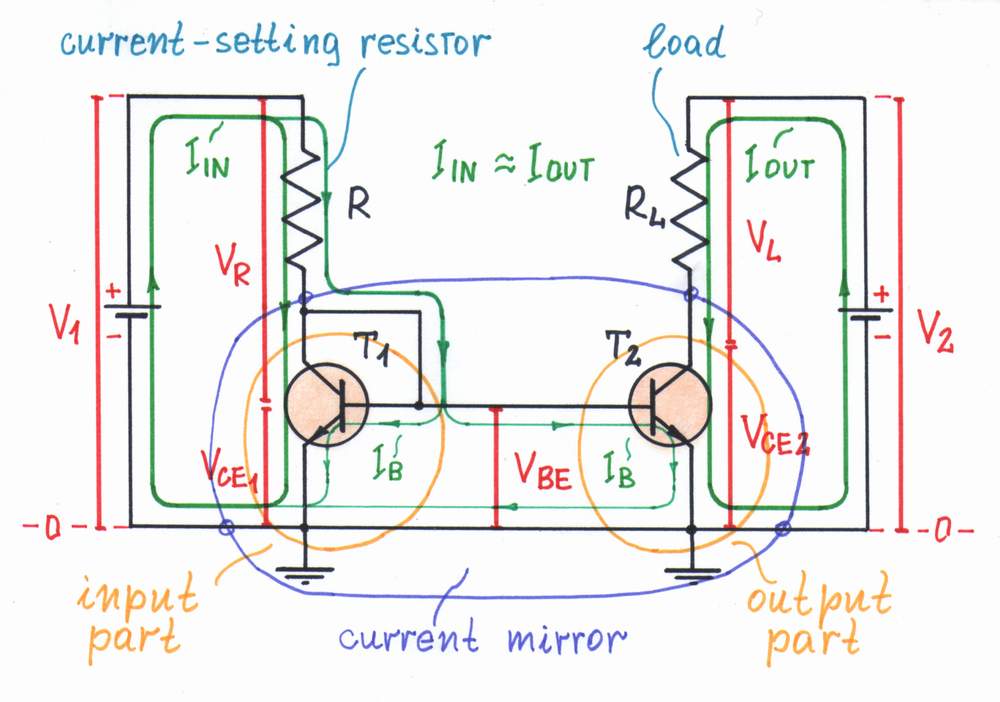 If we can see the same configuration in the single transistor, we will be able to explain in an intuitive way the linear relationship (Ic = beta x Ib) between the collector and base current.

In the BJT, the base-emitter voltage controls the collector current in an exponential manner. So if we directly drive the base-emitter junction by a perfect voltage source, the bare transistor can be thought as an "antilog voltage-to-current converter".

The conclusion is that, in this arrangement, there are two cascaded (reverse and direct) non-linear convertors. .. and the overall relation between the output quantity (collector current) and input quantity (base current) of this "aggregate" is linear - Ic = beta x Ib.

Is this a reliable viewpoint at the bipolar transistor and its current transfer characteristic... or I have fallen into some kind of a logical trap?

After not receiving a meaningful answer to my question for almost a month, yesterday I decided to answer my own question (the StackExchange policy allows and even encourages it).

I had no clear idea what the answer to the question was but I had the feeling that I would find it... ... and I found it. The magic word that helped me find it, was "trans-". So, here is the simple answer in one sentence:

Answer: Yes, we can present the current-driven BJT as two cascaded non-linear converters since the second one is a transconverter.

This idea allows us, after assuming the Shockley equation as a starting point, to conclude that the collector current depends linearly on the base current. The power of this approach lies in its versatility because it can explain various specific implementations.

Conceiving the idea. Even when I asked this question a month ago, my intuition was telling me that it was so... but I could not defend my thesis convincingly... and yesterday I found the solution. I came to this insight after analyzing in detail the BJT current mirror above and so I realized the role of the input transistor T1 (the so-called "active diode"). Here is the evolution of my reasoning...

Current mirror example. The key point here is that it is not the "active diode" that makes the current mirror... and it is not the one that provides the linearity; both they are provided by the humble second transistor. Indeed, it is not exactly a current mirror; it is rather a linear current amplifier since Ic = beta x Ib = beta x Iin. That is why the input "active diode" is connected in parallel to the base-emitter "diode" - to divert the excess input current and leave only the small base current so Ic = Iin. It is not connected to ensure the input log conversion since the second transistor does it itself by its base-emitter junction; it is connected to equalize the input and output currents.

Generalization. This conclusion (linear relation) applies to every transconductance converter which input behaves as the opposite converter... or, in other words, it applies to every 2-port voltage-to-current (transconductance) converter which input behaves as a 1-port current-to-voltage converter. In our example the BJT is an antilog transconverter (a "transdiode" controlled by voltage at one place that produces current at other place) which input is a log converter (a diode controlled by current that produces voltage at the same place). Note the ordinary transconductance (voltage-to-current) converter does not obey this idea since it can have a true voltage input (with extremely high resistance). Its input must be conductive... and with the opposite relation. So we can emulate it by connecting an external element (diode) in parallel to the input. For example, imagine the MOSFET transfer characteristic was exponential like BJT. The problem is that its input is extremely high resistive (open circuit). So we can connect a diode in parallel to the gate-source input to immitate the BJT base-emitter junction; thus the whole combination will act as a BJT with linear relation Id = k.Iin.

Variations. BTW it seems the opposite is possible as well but not so useful - to make a voltage-to-voltage converter by cascading a voltage-to-current and current-to-voltage converters. Interesting... it seems the op-amp inverting amplifier is such an example where R1 acts as the input voltage-to-current converter and the rest (R2 and the op-amp) acts as a current-to-voltage converter (transimpedance amplifier). The transfer ratio is linear. But it would be linear even we replace the ohmic R1 and R2 with nonlinear resistors (e.g., diodes)... a quite odd and somehow conflicting configuration... In this case we will apply input voltage and will obtain output voltage... and the relation between them will be linear.

Rebuttal. So, I have not fallen into a logical trap. This would have happened if I had tried to see this idea in an ordinary 2-terminal converter - the diode. That would mean I wanted to take the input current flowing through the diode as output current... which would be absurd...

4
BJT in Active/Linear mode — How can it still conduct current?
7
Why can current flow through the reverse biased base-collector junction (N-P junction) in a BJT with a forward biased base-emitter junction?
4
Is the current gain value constant for a single BJT ?
2
Can the parameter \$\alpha\$ and \$\beta\$ be used for any BJT?
2
Bipolar transistor as a switch
3
Why is saturation region called so in BJT characteristics?
0
The collector current of BJT
3
Why do not we use always current signal sources for BJT amplifiers?
0
BJT transistor, collector base junction