Understanding electric torque of a motor

I'm missing something fundamental in my understanding of the torque of a motor.

Now coming to electric motors, let's say I attach a 10kg load to the motor shaft. The motor would produce a torque T and rotate at a certain rpm. Now, I put 1kg load on the shaft. As per the dumbell analogy, wouldn't the 1kg load cause an increase in speed because it's lighter than 10kg?

Assuming we are talking about a shunt wound or permanent magnet brushed DC or BLDC motor, torque is proportional to current, so the more torque load you put on the motor the more current it will draw to match it. However the current causes a voltage drop in the winding resistance, which reduces rpm. How much the rpm drops depends on the resistance. A large motor with thick low resistance wire could lift a heavy weight without its rpm dropping significantly, while a small motor with thinner wire might drop down to stall speed and not draw enough current to lift the heavy weight at all.

To understand the relationships between torque, current, rpm and voltage, consider this simplified model of a PMDC motor:- 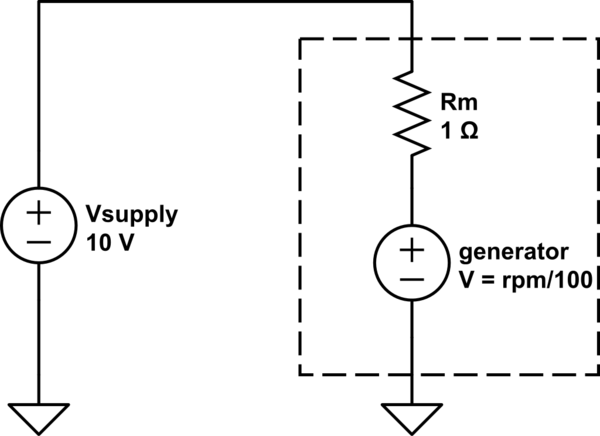 When the motor spins it generates a voltage proportional to its speed. This is a result of Faraday's Law, which says that moving a wire through a magnetic field induces a voltage in it proportional to its velocity, and occurs whether it is driven by an external force or by its own power. Depending on how it is constructed (number of turns, size, stator or armature slots, magnet poles etc.) each motor has a characteristic 'Kv' (Velocity constant), commonly expressed in rad/s/Volt or rpm/Volt.

Output torque is proportional to current according the Lorentz force law, which says that the magnetic force on a wire is proportional to current x magnetic field strength (which is constant in a permanent magnet or shunt wound DC motor). For a particular motor this relationship is a constant, called Kt (Torque constant), often expressed in N.m/A.

For this simplified model we will ignore any internal losses due to magnetic hysteresis, eddy currents, friction and air drag. If the motor has no load then torque and current are zero, and no voltage is dropped across Rm. That means the generator voltage must equal the supply voltage, and the motor must be spinning at 100 rpm/V * 10V = 1000 rpm.

Now put an external torque load on the motor. It will slow down and produce less voltage, causing voltage to be dropped across Rm. By Ohms Law a current must then flow, producing torque. Speed continues to drop and current rises until output torque matches the externally applied torque.

Now imagine an otherwise identical motor which has thicker wire, reducing Rm to 0.1Ω. The same 10A current (producing the same 0.95 N.m torque) now only drops 1V across Rm, so the generator must be producing 9V. This motor must be spinning at 9*100 = 900 rpm (only 10% less than the no-load speed) while lifting the weight that stalled the other motor.

Motor torque is directly related to motor current, not with voltage. Ignoring motor resistance, friction etc, when you drive the motor with a current source that would give the same analogy as pulling a dumbell with force F.

But we know that a motor's torque keeps changing with the load.

This is only true when driving a motor with voltage source.

Additional to other input:

Simplistically, in your 1kg/10kg load scenario, at a given power level the 1kg load will stabilise at ten times the RPM of the 10 kg load.

A useful rule of thumb is

It just happens that the various factors cancel out to give the useful approximation above.
For this example assume we have 1 kg.m of torque.
Assume the torque acts at 1m radius.
You'll get the same result with say 2m radius and half the force or 0.1m radius and 10 x the force.

Which is 2.6% higher than the
Watts = kg.m torque x RPM rule of thumb.

Consider a motor that can deliver 100 mechanical watts to a pulley with 0.1 metre radius. How we cause the motor to provide 100 Watts depends on circumstances - we may vary voltage or current - either way we arrange things so V x I produces 100 Watts mechanical output (in this case).

0
Driving torque and load torque of a pmdc motor

3
DC Motor very high acceleration
2
Which electro motor to use for steering a kite? (guestimation marathon)
7
Result of constant current through DC motor under different loads
2
Tension control using a DC motor
0
Driving torque and load torque of a pmdc motor
0
How does gearing affect power generated by a permanent magnet DC motor?
0
Is it possible to use an electrical motor with a constant torque while simultaneously turning against it?