Why does it take so long to trickle charge an AGM battery to the point where it matches the self discharge rate?

I did an experiment where I used a "regular" smart-charger set at 12A max AGM mode on a 12V 100Ah rated AGM battery to what it told me was 100% charged. The charger then automatically went into trickle charge mode of 13.5V. I immediately took the battery off of that charger, and put it on a laboratory power supply unit (lab PSU), manually set at 13.5V (and allowed to go up to 1.5A max).

What I am wondering is why does it take so long for that battery to "level off" at about 1/2 watt of charge power going in? For example, when I used the lab PSU, it started at about 3 watts of charge power. Over the course of about a week, it slowly went down to about 1/2 a watt then didn't go much lower.

So what I am thinking is it is very difficult to get those last few % of charge in the battery, so many modern smart chargers don't bother and maybe stop at 90-95% charged.

Just as a related comment... it is interesting to see what a particular battery will "bottom out" as, as far as charge power. 1/2 watt at 13.5V is only 37mA. I think many smartchargers may be programmed to stop at 1% of the Ah rating of the battery, so in this case, stopping at 1% of 100Ah = 1A. However, at that point, the battery still seems to want to take more charge.

One experiment I want to do very soon is after charging the battery for a week until it is what I think is a true 100%, drain some fixed amount of power out of it (let's say 1/2 KWh) using a reasonable load (such as a 150W incandescent lamp) and a Kill-A-Watt meter, then measure how much AC wall power it takes to get it back to that true 100% State of Charge about a week later, using that same Kill-A-Watt meter. I suspect running the initial charger a few hours plus running the lab PSU for about a week 24/7 will add up to maybe 3x to 4x the power (I am guessing 1.5 to 2 KWh). If that is correct, then something seems "out of whack" that it takes that much more power to get the battery fully charged.

Also let's assume the first charger really does stop at a true 90 to 95% state of charge. At that point, the wall power consumed is probably much less than 3x to 4x the power we got out of the battery, and I will record this number. It might take as much (or more) wall power to trickle charge for a week, then it does to get the battery to "100%" by the smartcharger's "definition". This should be a very interesting experiment.

I've had the battery on the lab PSU for about a week now and it is very close to drawing 1/2 watt (37mA at 13.5V). It is around 41mA. It must be very difficult to get that last little bit of charge in there, however, I suspect keeping the battery at a true 100% SoC is healthier than what a typical smartcharger (that is much quicker) calls "100%". It would be interesting to do a capacity drain test using both charge methods (smartcharger only vs. smartcharger for bulk + 1 week on lab PSU). I wonder if the difference in capacity will be 5% to 10% more using the lab PSU to top it off.

For the benefit of those of you wondering, that laboratory DC power supply is Instek brand, model GPS-3030DD. It has a range of 0-30V (actually about 31.4) and current limiting from 0 to 3A (actually about 3.1). It is rated at a maximum of about 90 watts output but can be coaxed into about 100 watts. I usually run it at 1.5A max (about 50% of its max rating) and I usually blow a fan across the heat sink if the charge current is 1A or more. 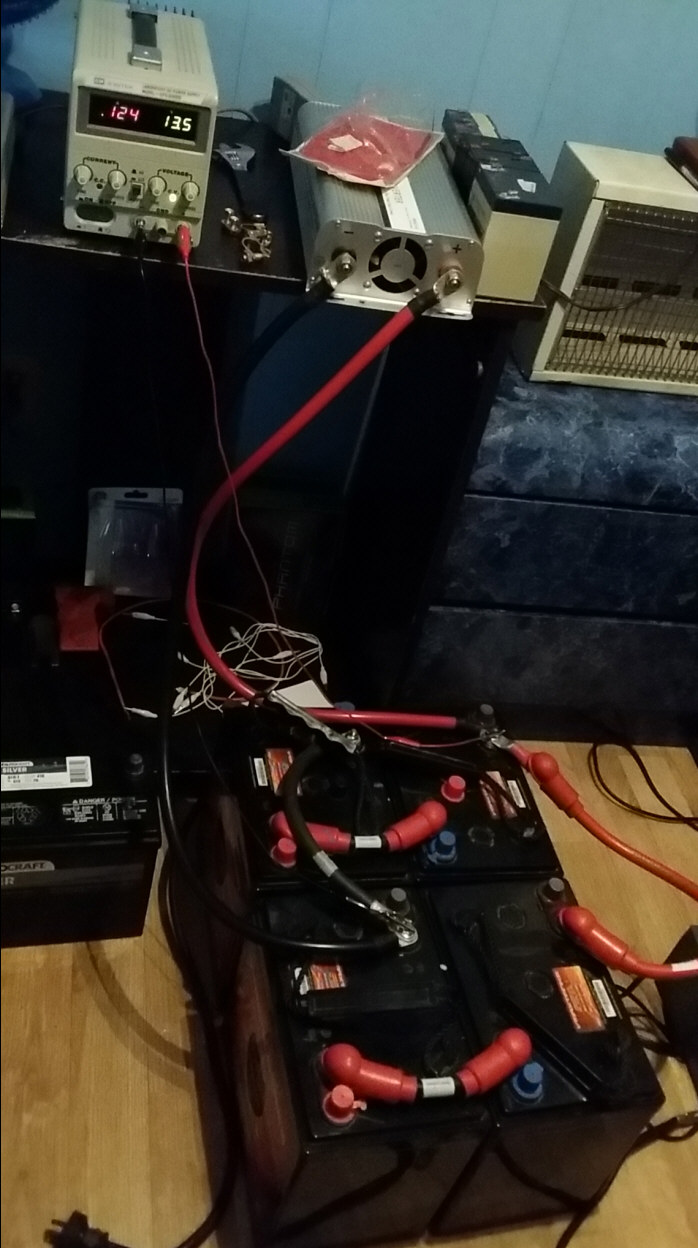 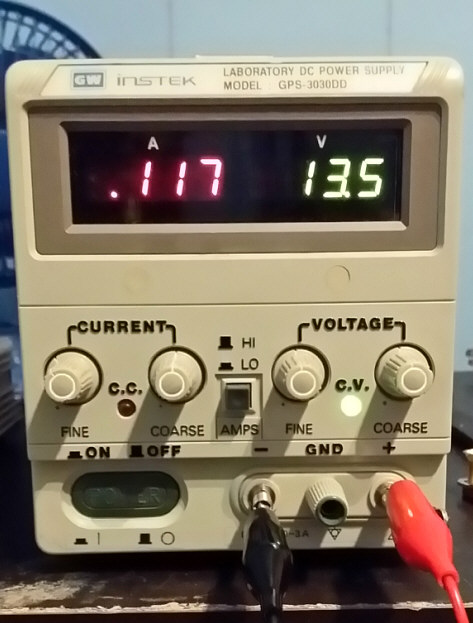 What I am wondering is why does it take so long for that battery to "level off" at about 1/2 watt of charge power going in?

As the battery charges its voltage rises, so the charger has to raise its output voltage to put more charge in. However if the voltage goes too high the water in the electrolyte will break down into hydrogen and oxygen. A sealed battery can withstand a bit of this, but if the gas pressure gets too high it will vent and lose electrolyte.

To prevent excessive gassing the maximum charging voltage is limited to ~2.3V/cell. The battery has some internal resistance which drops voltage proportional to current (Ohm's Law), so once the terminal voltage reaches the maximum allowed the charging current must go down as the battery's internal voltage approaches it. The result is an exponential drop in charging current over time, similar to charging a capacitor through a resistor.

At the same time the battery also self-discharges, due to various unavoidable chemical reactions. This is why the current never quite drops to zero. The combination of charge current reduction and self-discharge results in an exponential curve that levels off at a current above zero. At that point the battery is already at 100% charge, and any further 'charging' current is just maintaining the full charge state.

if 2 identical batteries have 2 different bottom out charge rates (let's say one is 37mA and the other is 40mA at 13.5V), what (if anything) can we conclude from that?

We can conclude that one battery has a lower self-discharge rate than the other. This could be caused by fewer impurities, different temperature, different battery size or a different type of battery (eg. Calcium-lead vs. Antimony-lead). In a 100Ah battery the difference between 37mA and 40mA is only 3mA, which is insignificant compared to its capacity.

However 'smart' chargers often have a multi-stage charging strategy that raises the voltage a little higher to speed up the 'absorption' stage. This may cause some gas production (which in a sealed battery recombines once the charging cycle is finished), but must not be continued for too long or the battery will start to lose electrolyte. Once the absorption stage is over the charger either shuts off or drops to a lower 'float' voltage which charges very slowly (if at all). With this technique the battery can get very close to full charge in a reasonable time period.

I will attempt to answer my own question for the benefit of readers. I remember reading somewhere that what is happening internally when a battery is charging is somewhat analogous to musical chairs. In the beginning, as electrons are being forced into the battery, there are many positions where they can make what keeps the battery in a state of charge "attach" to the plates. This is why an AGM battery can be "blasted" with high current (sometimes even more than C/1) while in the bulk charge phase. Another analogy for computer savvy people would be a random number generator with a limited range (such as 1-1000). In the beginning, it is quite easy to generate a "non-seen" random number and then mark it seen (such as we draw 567 first, then 123 and mark that seen second...). However when we get more than about 75% of those numbers already seen, chance are the next random number we pick (from 1-1000 still), will be a repeat (already seen), so that slows down the process.

Yet another analogy is would be filling the gas tank of a lawn mower. If it is pretty much empty, you can pour the gas in there rather quickly, however as it becomes close to 3/4 (75%) full, you need to slow down for fear of it splashing out on the hot engine or missing the full mark and overfilling it.

What I don't really know for AGM batteries is the following: Is it better, worse, or same to slow charge a battery more than 24 hours from say a 50% SoC? Since AGMs do not have to gas (to help de-stratify the sulfuric acid solution), it seems any reasonable charge rate (that gets the battery to at least 75% SoC from 50% SoC within the first 24 hours is acceptable). However I suspect bulk charging to 75% within a few hours and then getting it to 90% or more within the first 24 hours is even better (which is why they do it).

I am also thinking that the reason those last few % are so slow is because the person who owned my used batteries before me maybe never charged them up to a true 100%. After a while, by doing that, the batteries might reject that last 5% or so of charge or maybe it takes extra time to desulfate that part of the battery (the part of the plates that rarely or maybe never had charge). I am not sure if by charging an AGM battery to "95%" each time exposes the same part of the plates as uncharged or if it is more random. That is yet another interesting question out of the scope of this question I think.

My final argument is that smartchargers probably don't put in that last 5% because it takes too long to do that and people don't want to wait that long (generally speaking). Since they go to approximately 13.5V anyway in AGM maintain mode, they are effective still slow charging, so if someone leaves it on there for say 12 hours, they are actually getting MORE charge, even though the smartcharger may indicate "100%" charged long before that.

14
how can I try to revive this AGM deep-cycle battery which started to perform dramatically below specifications?
18
How long does it take to recharge a car battery after starting?
3
Do I have to keep an AGM battery on float charge 24x7?
0
Charging 12V/4A battery
6
Why battery charge C rating is usually lower than discharge
1
What voltage are AGM battery capacity ratings supposed to be computed at?
0
How does battery "passthru" charge power affect lifetime capacity?