In the picture below, I am connecting a constant power resource and a battery to each other by a lipo charger.

Is this coupling correct?

In your scheme power can only get to the 'consumer circuit' through the charger. Therefore if the 'consumer circuit' attempts to draw more current than the charger puts out the battery will supply the difference. At other times when the load is drawing less current the charger will top up the battery with the difference, while also supplying power to the load. This is called 'floating' the battery, a technique commonly used in motor vehicles and DC equipment that needs to run uninterrupted (eg. telephone exchanges).

If the 'consumer circuit' normally draws less current than the charger puts out it may work fine, provided the charger is happy with this arrangement (some chargers shut down after a timeout period, at end of charge, or on overheating at high charge current, which could prevent continuous float operation).

However if the load consistently draws more current than the charger can supply the battery will run down, even if the power supply could have delivered all the current needed to run the 'consumer circuit'. If that situation applies to your application you will need a more sophisticated circuit that bypasses the charger and supplies power directly to the load (through a suitable regulator that reduces the voltage to a value the device can handle, eg. 4.2V). This has the advantage that the charger can be dedicated to just charging the battery, while the power supply powers the load independently.

The simplest way to separate the battery and power supply outputs is to wire a diode from each to the load. The diodes block reverse current, which stops the power supply from trying to charge the battery directly, and stops the battery from powering the load while the power supply is putting out higher voltage. A potential issue with this is that the diodes drop some voltage (typically 0.3~0.6V for Schottky types) which the 'consumer circuit' might not like. Problems may include inaccurate battery state indication, or shutting down because it thinks the battery voltage is too low.

your topology is principally correct. It can be improved in various ways - how much improvement you can implement, that's down to your motivations in the project and your budget :-)

Your power supply should have an output voltage limit that does not overcharge the battery, and enough current capacity to keep your load alive at the lowest expected battery voltage level. What's left, flows into the battery when charging.

The PSU should not mind if something keeps its output down (possibly down to zero, if the battery ever gets over-discharged, which BTW is pretty destructive to LiIon-chemistry cells). Many power supplies just shut down to prevent damage, if they cannot sustain the nominal output voltage (within a relatively narrow margin). I.e., your power supply should have a "constant current limit" or should be nominally a battery charger (and a pretty stupid one at that) and you should consider the risk of fire, if the PSU keeps feeding a shorted circuitry (for whatever reason/defect).

In industrial practice of DC-supply systems with battery backup, you can see various solutions, starting from this one of yours on the cheap side. I'm speaking setups with 12 or 24 or 48 V nominal battery voltage (even higher levels are sometimes used: 110 or 220V DC). Conceptually, this topology with a step-down power supply working as a charger (often called a "rectifier" in the DC supplies) and the load connected (semi-)permanently to the battery is typical e.g. for telco switch power supplies at 48V DC (more like 55 V when fully charged). Solar systems look like this. Optionally you can have a step-up converter (also called an "inverter") on the battery-backed output, to power e.g. 230V AC mains devices - but if the actual loads need low-volt DC (12V nominal input and further buck converters inside), the intermediate up-conversion is often just a net loss of efficiency. I'm getting off topic here :-)

Things that can be improved about your circuit:

How much of this you implement is your own choice. Unless this is some portable or micropower device, consider using a higher battery voltage, say 12 Volts, if you want to improve that charger circuit and have some room for playing with MOSFET's. Also, there are off-the-shelf PSU modules (often DIN rail mount) for DC UPS applications, with internal logic and an extra pair of screw terminals for battery attachment.

Years ago, I've actually sketched and built a circuit that can be attached to the output of a strong enough and stupid "charger" PSU (13.5V and a constant current limit) to add battery over-discharge protection and to limit the charging current from the overly strong charger PSU. Designed for lead-acid batteries. 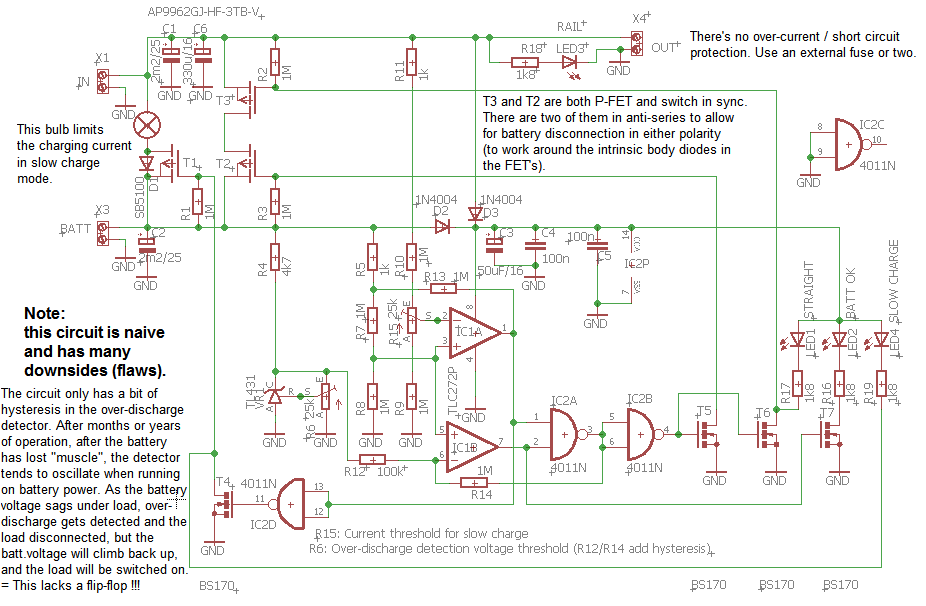 Looking back I have to say that the design was naive, and it would nowadays probably be stupid to reproduce that. Therefore I'm not including the source files (ask me if you desperately want them :-)

It is probably much easier nowadays to just use an off-the-shelf PSU with battery UPS function. There are some such modules by MeanWell: the DRC, SCP, AD and ADD series, with a varying set of protections - namely the SCP doesn't seem to have an over-discharge disconnector. And, I have recently discovered a neat family of stationary battery chargers (by a local vendor called BKE) that are designed to work as a DC UPS with an external battery, and even have a basic remote management capability over TCP/IP.

1
LiPo charger balance plug is kaput
0
Charge a Lipo battery and power a circuit
0
Arduino standalone with 9V battery and accelerometer
3
Automatically switching from battery to DC wall adapter on insertion
1
How to charge a lipo battery inline with load
0
How charge Ni-Cd battery from cordless drill
0
How can I make battery supply power when wall adapter supply is disconnected?
0
Sensor to charge battery