Type of capacitor to bridge X10 signals in household power

X10 is a protocol for communication among electronic devices used for home automation where the signals involve brief radio frequency (RF) bursts over a home's A/C power lines.

Household wiring often has two different power circuits; each of the two 220V offers a single phase circuit to neutral. This means if the X10 controller is on one of those 110V circuits, the signals are not passed to the other of those circuits.

The solution to this is to bridge the two 110V circuits so the RF signals may pass between them. This question is about what the specs for the capacitor should be if we wanted it to be very reliable over time.

I bought and installed a capacitor like this (for a dollar) and it worked for probably five or more years:

But then it failed, and looked like this when I found it: 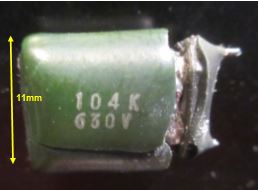 Capacitors, when operating properly, do not conduct [significant] current across their leads, but this season (putting up Christmas lights), the signals were not passing to all outlets, and when I looked in the breaker box, the capacitor had dropped away and fallen to the bottom. The leads were gone (apparently melted). So the dielectric apparently broke down over time and the capacitor failed.

This got me to thinking, would there be a higher quality / higher spec capacitor that would be less likely to fail? If it meant I could count on it when I needed it, for decades to come, it would be worth spending more on it. But I don't know what to buy. I suppose I could install more than one, then if one failed, I'd have another. But I'm not going to be pulling the cover off of the breaker box to see if one or the other blew. Obviously not a critical problem, but just curious if there's a solution where a little more investment would mean no problems in the future.

I ordered another one from the same place as I got the one the that had earlier failed: 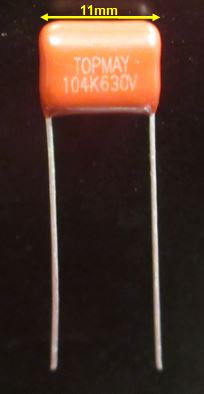 I like X-10, use it myself, and have put it into several friends' homes. What has worked for me for decades is a 0.22 uF plastic box capacitor, rated X, X1, or X2. This is a film capacitor similar to the one pictured, but rated for continuous connection across AC lines such as Line-to-Line (240 Vac). Most are rated for something like 275 Vac.

This type of capacitor is called "self-healing". If an internal short happens, the transient current blows away the shorting material, often such that the part continues to have enough capacitance to function normally. 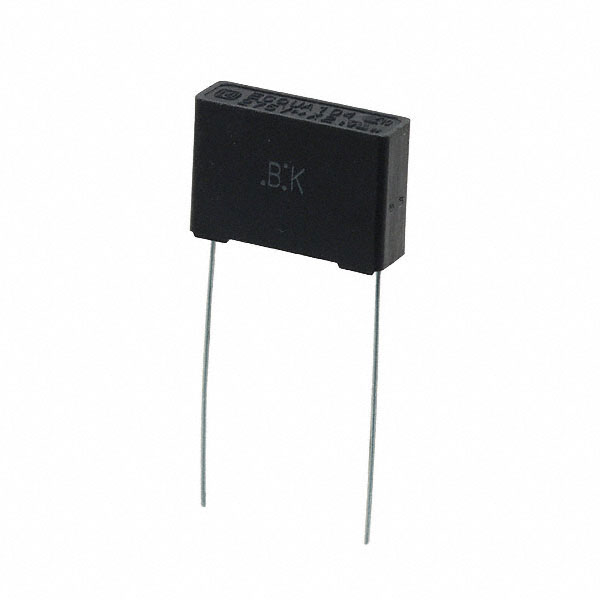 UPDATE: Seeing the added photos of the old cap with the "104" marking (0.1 uF) jogged a memory. Long ago I knew that was the recommended value, and used it for a while. But as I expanded the X-10 stuff around the house, some controllers could not "reach" some devices, so I increased the value to 0.22 uF and that solved it. That is why I recommend 0.22 uF over 0.1 uF. If you want to compromise, 0.15 uF also will work.

Capacitors that are designed for direct connection across AC lines are designed to carry the resulting current at the line frequency. However they are not necessarily designed to carry the current resulting from the harmonic voltage that results from nonlinear loads distorting the power waveform. Every electronic circuit load from LED bulbs to motor controllers causes line voltage distortion. Devices such as the one pictured in the question may be designed to accommodate some harmonic current. If the voltage marked on the device is the rated RMS voltage, the margin between that voltage and the 240 volt line voltage represents some margin for harmonic current capacity. You should study the specifications for the devices that you can find.

Since the device pictured is marked "phase coupler" and lacks a capacitance marking, it is not clear what is inside. If it is intended for the purpose that you described, you should try to find more detailed information about it. Compare it with whatever you originally had installed.

Not the answer you're looking for? Browse other questions tagged capacitor rf ac signal x-10 or ask your own question.

0
How do I test a circuit breaker out of the circuit box, and still hooked up to the circuit box?
2
Type "X2" line filtering capacitor failing as short circuit
0
How to wire a 5-leads single phase asynchronous motor to a 3-leads bidirectional controller?
1
How do I prevent backfeed through contactors when joining 3 x 230v ac circuits all single / same phase
0
controlling one 110v device from three inputs
0
combine 2 x 5A circuits from a single phase 240V mainline
0
Bulk capacitor capacitor type and configurations matter?
0
How do I find these transformers? Please help me identify
0
Replacing an AC drive in my mill and the use of a magnetic contactor in the power supply line