P Channel MOSFET is not behaving with another MOSFET 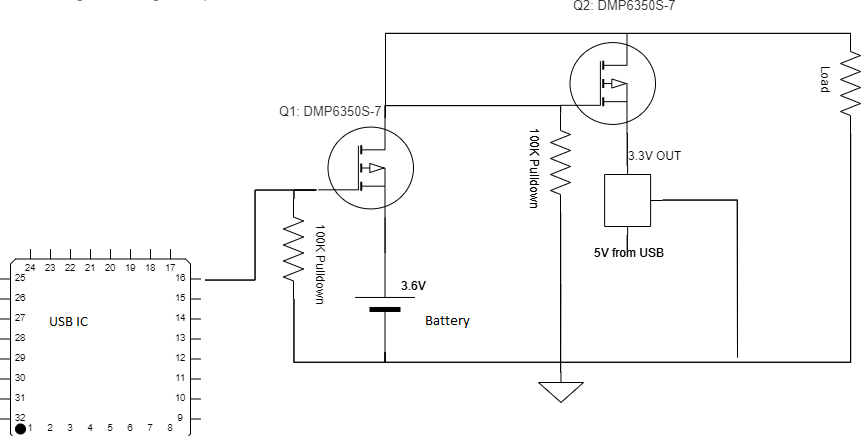 This is a very simple (or so I thought) power switching circuit I made for an extremely low, power consumptive device.

The device normally runs on a 3.6v lithium, but occasionally a user will plug it into a computer to grab/program data. When plugging into computer, I want to kill power from the battery and solely power from USB interface. When USB is disconnected, MOSFETs make the switch back to battery.

Both MOSFETs are P Channel.

When I first built the circuit, I left Q2 out to check if Q1 was working as expected. It was. When the USB is not plugged in, Q1 gate is 0v, and source is 3.6V. Negative 3.6V fully turns on the MOSFET. When I plug in USB, interface IC turns on, and drives Q1's gate to 3.3v which turns it off just fine.

But when I added Q2 (with no USB power), Q2 doesn't want to turn off. The VGs should be +3.6v, so it should drive it hard off! Instead, it seems like it's partially on, back feeding the voltage regulator; I'm reading 2V on the reg's input. Then when I plug in USB, now Q1 wont turn off!

Here's my thought's on what should happen:

When USB power is added, Q1's gate is driven high by the USB IC which brings the Vgs to -0.3v which is plenty to keep Q1 off (confirmed through testing). When Q1 turns off, Q2's gate is 0v and the source is +3.3v. This gives Vgs -3.3v which should be driven fully on.

Any help would be awesome. Thanks guys! MOSFETs data sheet

Q2 leakage is probably through the body diode of the FET, which is not shown on your schematic. I think a bigger problem is that the gate and drain of Q2 are connected together, meaning you can only get within Vgs(th) of your 3.3V supply. And Tony's right, if those resistors are meant to turn off the FET in a floating gate situation, they should be connected between gate and source.