A Marx Generator is a capacitor arrangement that transforms a DC input voltage of let's say 1 to 20 kV to a multiple of that. Capacitors get charged in parallel and when they reach the break down voltage, they discharge themselves over spark gaps and essentially get connected in series leading to a much higher output voltage (theoretically input voltage times capacitor amount).

I built such an arrangement, but the sparks it produces are kind of small. The easiest thing would be to measure the output, but I don't have a multimeter for voltages that high. Additionally I also want to understand the theory behind it, which is why I wrote this question.

This image is a circuit diagram of a Marx generator. During my research I found several diagrams for Marx generators. They differed a bit, but all of them had the problem described further down. The image will help me describing my problem: 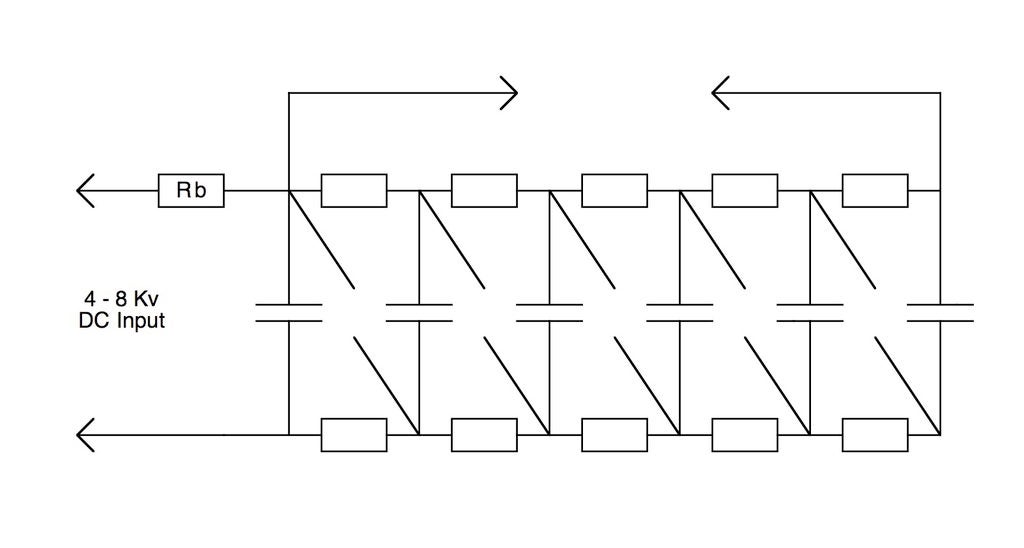 My question is the following:

Thank you for reading this far.

I am pretty new to the field of electrics, so please be patient with me.

Edit: As I don't know how to post an image in a comment, I will put in here. Some of you mentioned that the resistors would be exposed to the full voltage if placed in parallel too. Have a look at the picture. Wouldn't that fix the problem? 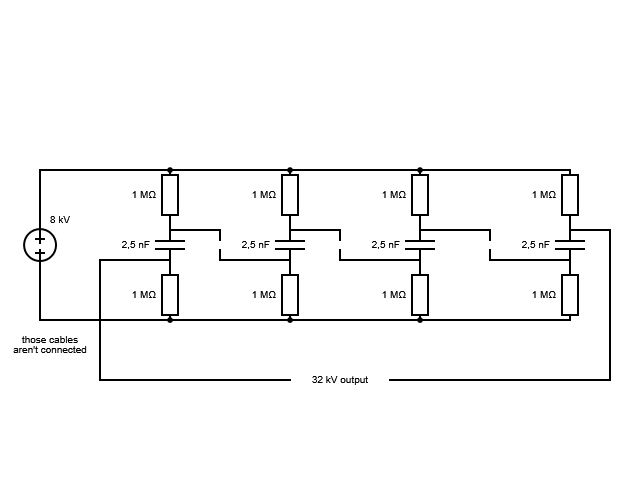 You could use a parallel arrangement of resistors, but you would need very high voltage resistors, and clearances round them. The main point of a Marx is to get a very high output voltage with modestly rated components.

When the Marx fires, each resistor still only sees the charging voltage. If you used parallel resistors, the ones to the end stage would see the whole output voltage.

Eventually, all stages of the Marx will reach the same voltage. You can improve on the charging time by using inductors instead of resistors. This limits the length of the output pulse, but it's usually fairly short anyway.

If you wait sufficiently long all capacitors will charge up to the input voltage.

When the "diagonal" spark gap goes off all capacitors are connected in series through their spark gaps and the total voltage is the input voltage * capacitor stages. The idea is that the spark gaps are at that time very low resistance.

To understand this, draw the diagram again, but with all capacitors charged and all "diagonal" spark gap replace with a short-circuit.

I built me one of these and learned not to let go off whilst your talking next to it on the phone.

In your second diagram you have a bottom resistor in series with the discharge circuit. That would severly limit the output current.

I worked with one of these at the high voltage lab of the university of Delft. It was 20 meters high and could produce several Mega volts. They did not use your adapted scheme so I would assume there are some disadvantages but I honestly can't see which. Apart from this one: For safety you want the ground of your feeder voltage and the end spark to be the same.

By the way: before you were allowed to work on it, it had to be discharged. You did that by turning a wheel which pulled a metal wire past the capacitors. Each time it hit a capacitor you would hear the 'chack' of the discharge.

I did not want to be pedantic but your initial diagram is wrong. The bottom capacitor does not add to the circuit. The 'left' arrow should come from the bottom which makes that it is at ground level. Which is important for my remark about safety and ground above.

The capacitors are in series when the device fires.
The resistors are too.

You COULD use parallel feed and increasing resistor values but you get the same effect this way.

When a single spark gap fires all the rest are triggered by the voltage pulses transmitted through the capacitors, so it does not matter if the have slightly different gap distances.

All your observations are correct. However ...

1) If you wait long enough, all capacitors will charge to more or less the supply voltage

2) There are two common ways to get a Marx to erect. One is to have one spark gap set less than the others. When this breaks down, stray capacitance of the other nodes to ground will transfer some of the step to the other gaps, causing them to break down promptly. If this smaller gap is the last one in the chain, it will ensure all the caps are charged to at least that voltage. The other way is to use a triggered gap as the first gap. You can wait until the requisite charging time has elapsed before triggering the gap.

3) People build Marx generators to get verrrrrry high voltages. This means space and components are at a premium. The conventional layout of a Marx uses its length to good effect, adding the voltage withstanding of the space and the resistors in series. Your parallel layout forgoes that advantage. There is little point building a Marx for modest voltages.

Not the answer you're looking for? Browse other questions tagged capacitor resistors circuit-design high-voltage generator or ask your own question.

2
Marx Generator or Voltage multiplier
1
Low ESL Capacitor Types
0
AC Light Bulb Fade Circuit - Resistors Getting Hot!
0
Why is resistor in parallel with capacitor needed in capacitor bank?
2
Question about the placement of resistors on a Marx generator
3
Transient analysis of a marx generator
1
Power consumption in voltage multipliers