Why is wired Ethernet losing its speed advantage over wireless?

We see MKBHD in this video going to some street with a phone and getting over 1Gbps. Surely a reserved and shielded Ethernet channel should give us 1Tbps right?

I feel we are just not trying enough on the Ethernet side of things. Is it the case?

It's not an apples-to-apples comparison to compare 20-year-old (1 Gb Ethernet) or 25-year-old (100 Mb/s "Fast Ethernet") technology to the latest in wireless just because that's what's available in the consumer market.

We see now the MKBHD guy going to some street with a phone and getting over 1Gbps. Surly a reserved and shielded Ethernet channel should give us 1Tbps right?

nope, why should it? Data rate is a function of SNR and bandwidth. (Shannon Capacity: you can only transport a limited amount of bits per second over a medium with limited bandwidth and limited signal fidelity; both applies to twisted pair; that's impossible to circumvent through research; it's mathematically proven.)

You'll need shielded ethernet cable that supports enormous bandwidths (that means, wavelengths from meters down to millimeters) to do terabit communications. That's physically not how twisted pair works; there's an inherent low-pass character to it that limits the usable bandwidth.

That's why we only have terabit/s communications over optical fiber: Whilst still electromagnetic waves, due to the extremely high carrier frequencies of light, dozens of Gigahertzes of bandwidth are achievable.

Note that doing high-rate electrical (e.g. on PCBs between your network card and your CPU, or even Gigabit ethernet) or optical links already needs basically all of the techniques that you see in wireless comms – synchronizers, equalizers, phase recovery, extensive channel coding, higher modulations¹.

Of course, the rates you get with a dedicated medium such as a fiber optic channel or a microwave guide on a PCB are higher than that in mobile comms, simply because of shorter distances (hence lower loss) and reliable channels (a lot of the rate of the channel in wireless comms is occupied to getting to know how the channel looks like, so that one can correct it at the receiver).

Your "factual" claim hence is plain wrong: You can certainly get higher rates over twisted pair then over some microwave link; 10 Gb/s ethernet over twisted pair is a thing. But the complexity of the receiver doesn't stand back behind that of a wireless receiver, in that case.

¹ And in fact, high-rate optical brings its own can of worms that's worse in at least one aspect than how we usually approach wireless comms: You'd drive the optical fiber in a power region that makes it a nonlinear medium; then suddenly, all of the precious assumptions about how different frequencies are orthogonal and how signals add up linearly break down, and that has catastrophic consequences for a lot of the math that we're used to.
Share
Improve this answer
edited Dec 13 '19 at 16:06
answered Dec 13 '19 at 15:12

Wireless is not catching up to Ethernet in terms of transmission speed, but it is becoming fast enough that most people don't need to use faster wired systems. However, if you want to buy faster wireless devices, checking the prices ethernet modules on fs.com is instructive:

So to put that in perspective, a typical Intel branded Wifi card costs a few dollars less than an ethernet module with a real world bandwidth about 100 times greater. From that point of view, wireless is not very fast.

However, the real advantage of wireless in terms of cost is that the bandwidth is shared between all clients, whereas in wired ethernet, the bandwidth increases as the number of devices increases. This makes highspeed ethernet switches (which may require terabit/s switching speeds) extremely expensive. They also have hundreds or thousands of times more bandwidth.

Money. Time is money, but convenience is REAL money.

Because the speed-per-user cost is relatively low, and because the portability of wireless has a value almost beyond price. Yes, the infrastructure to get GHz data to hundreds (thousands?) of phones per cell tower simultaneously is really expensive, but the alternative - a fiber optic cable to every moving car on the highway - is flat out impossible. That guaranteed money flow drives what is, if you stop and really think it through, near-alien-technology development. Once the cell people have developed the tech, and the illusion of need, trickling it down to consumer home networks is relatively simple.

And again, running wires is hard. Especially in homes. Outside walls have insulation, inside walls have wiring, plumbing, and god know what else, and the cosmetics, esthetics, and budget are very different from what is considered normal for a commercial building. Think about the inconvenience of moving an ipad from room to room by unplugging and plugging cables. That's money, and that money drives astounding development. Using 1980's chips, a $30 home wireless router would be the size of a microwave oven and cost as much as a car.

There's room for argument about some of the details. For example, I've omitted some of the rarely-used standards such as the original 802.11 and 802.11a, as well as some of the early 100 GBps Ethernet standards, in attempt at getting at least some approximation of speeds that were used fairly widely, not things that ended up as little more than technology demos. Depending on what you decided to include, you could get a somewhat different graph from this.

With that proviso, I get a graph of relative speeds something like this: 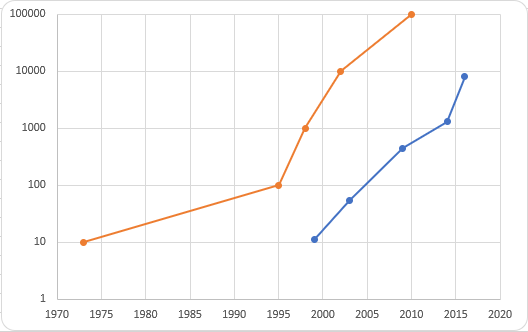 That looks to me like since the introduction of 802.11b, the two have been tracking fairly closely in terms of speed growth. Even though this is on a logarithmic scale, it looks like Ethernet (ignoring the pre-1995 period) has marginally faster growth, but given the small number of data points, I don't think either has a really massive advantage (note, that is to say: Ethernet has a speed advantage at all times, but its speed advantage has remained approximately constant for quite a while).

It's also worth noting that as speeds have gone up, distance has gone down (for both technologies). The newest/fastest 802.11 (802.11ad) operates at high enough frequency that its target range is "at least a meter", and generally won't go through walls at all. At least to me, that seems to leave some room for question whether we're likely to see it continue growing a whole lot. If I were being entirely fair about things, I'd probably have left it off the chart entirely--actual use seems to be extremely limited, at best. Even if I included it, I probably should have cut the speed in half (or so). What I've shown is the 8 Gbps variant, but most of the wireless routers I've seen only do the 4 Gbps variant (though most can also do an 802.11ac and 802.11n stream at the same time, so they're around 5.5-6 Gbps total).

A major advantage of wired Ethernet for some purposes, to which wireless Ethernet can never catch up, is that the amount of bandwidth available in one cable will be unaffected by bandwidth utilization in other cables nearby. If one has 100 clients in a room each talking to its own server, and the cable topology allows every client to talk to its server without having to traverse any cables that are used by anyone else, each of those client/server pairs could have just as much bandwidth as if the other 99 didn't exist. By contrast, if the clients and servers were all in the same room trying to communicate wirelessly, they would only be able to use a small fraction of the bandwidth they would have available if they were alone.

A related advantage is that wired connections can deliver bandwidth reliably and smoothly, without hiccups. Although it's possible to stream video wirelessly with relatively short delay, it's not possible to guarantee 100% delivery of all frames within a short window. By contrast, if one is using a dedicated wired Ethernet connection between a client and a server, and if the client and server are themselves fast enough to handle the traffic, every packet will be delivered within a fraction of a millisecond from when it was sent.

There‘s one really big advantage of wireless over wired regarding attenuation.

A wired coax has ~X dB/m attenuation, whereas a wireless link has ~20 dB per tenfold distance attenuation (1/r^2).

This already pays off in favour of wireless for distances >100m.

This is why you could never do a wired cable link from earth to moon, but for a wireless radio link, NASA already did it 50 years ago.

As others have noted, there are Ethernet standards for far higher than 1GB transmission. However, these have relatively small penetration into anything other than specialised datacentre installs.

The average home user, or business "office floor" user is still using Cat5 or maybe Cat6 cabling. The latter can theoretically do 10G, but in most cases probably only runs at 1GB. The reason for this is the cost of 10G is probably far greater than the real benefit of it. That is, the average desktop/laptop user, even the "power" users simply don't need that much bandwidth all of the time. For the few times in the month/year when they do, sure, it goes a bit slower, but the cost of that delay is less than the cost of provisioning 10G to them.

As noted elsewhere is that the higher "rated" bandwidths of wireless technologies are shared amongst all clients on that same network. Thus contention can dramatically reduce the real, available bandwidth to any given client. Further, there tends to be a larger protocol overhead for wireless networks compared to wired - so (say) a 1GB wireless connection, dedicated to one client will actually download data slightly slower than a 1GB wired connection (my rule of thumb is about 10% protocol overhead for wired, and 20% for wireless, but I'm doubtless waaay inaccurate there). Thus, higher bandwidths look good in marketing brochures, but don't necessarily mean that's what you'll actually get.

Just to labour the point a bit further... Bandwidth (and the equipment to provide it) is demand driven. Right now at least, the average user simply doesn't need the bandwidth of a simple Cat5/6 cable, let alone the additional bandwidth of later standards. Most users just need to download a few files, maybe watch some videos and send some emails. As such, "1G is enough for anyone", at least right now. I'm sure when we start getting full-brain implants that need more bandwidth, the cabling and connection standards will appear to support it, and with enough people to buy it, the price will be low enough that it'll become consumer technology.

All the while though, even the average household could completely consume many of the more common wireless standards - just by doing the "simple" activities I mentioned above with phones and laptops. Those people will absolutely want additional bandwidth, and so will be looking to upgrade to ever faster wireless networks for a few more years at least. Another solution for some of those people would be to use more Wireless Access Points to divide users amongst channels which don't affect each other. That more than doubles the install cost though, so the demand for higher bandwidth remains.

Not the answer you're looking for? Browse other questions tagged wireless ethernet wifi tcp-ip data-rate or ask your own question.