Any problem with this simple supply switching circuit? 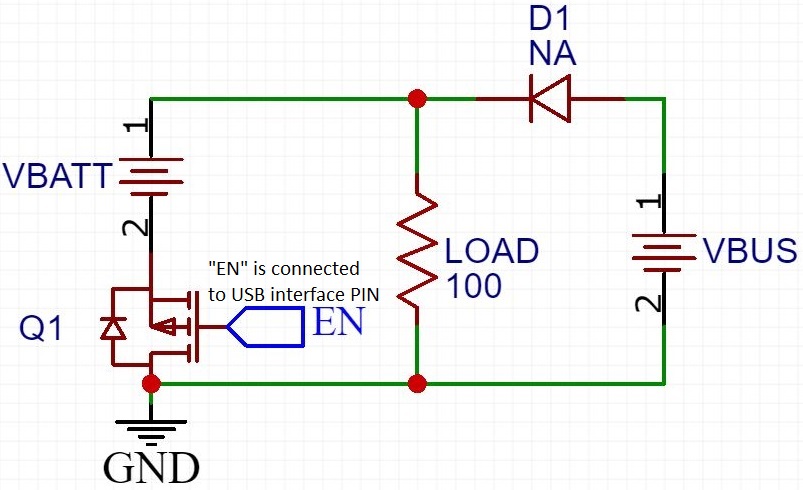 Is there anything wrong with this circuit?

The goal is to have a battery powered device that is occasionally plugged into computer via USB. When plugged into the computer, I want to switch power from the battery to solely USB power. I don't want any battery charging.

This is how I expect the circuit to work:

Q1 is a P Channel MOSFET. It is the switch that connects or disconnects the cathode of the battery from the circuit. With only battery power connected, Q1 gate is 0v and source is 3.6v (from the battery), which drives the MOSFET on and sends power to the load. The diode is to keep from back feeding regulator.

When USB is plugged in, "EN" is pulled to 3.3V which will turn off MOSFET and disconnect battery from the circuit. The regulator steps 5V down to 3.3V and powers the load. There any problems with switching power this way? This is the best circuit I could think of that will have the least parasitic losses and no voltages drops when load is using just battery. It is important the entire system uses no more than 10-15uA. Parasitic losses from this circuit I calculated at about 4.3uA

Browse other questions tagged power-supply batteries switching or ask your own question.

3
5v and 3.3v from 2xAA and/or USB
3
Is this power switching circuit ok? Switching between VIN and USB
2
Using battery and USB power at the same time
1
Switching between power sources using a P-mosfet. Problem with LDO
2
Switching device for ultra-low power sub-circuit
0
Power source switching/isolation circuit
2
Does this circuit work to switch a load with a microcontroller?