This is obviously on the lower level of the LED brightness, so to combat the brightness I would have to increase the instantanious current, which I have decided would fit well in the range of 100mA to 300mA after testing, research and consulting the datasheet. This will give me an average current of 1.56mA to 4.69mA and the maximum I can get out of the LEDs without possibly harming them. The brightness at ~4.5mA is a good brightness.

The problem I have, is that when I apply 5V and set the duty cycle of a square wave to 1.5%, I can never achieve more than ~0.5 to 1mA. So I tried lowering the resistance until the point where I have just shorted out the resistor, and I never get more current than this. Would increasing the supply voltage work? Because I tried this (with a mosfet + resistor) and it did not work. Is there something I'm missing here? How can I get more current out of this LED?

My circuit is in the schematic below. I'm using a 2N7000 NMOS but I have also tried the circuit without the NMOS and the square wave directly to the LED-resistor circuit, and the result is about the same. The LEDs are blue ones (3.2-3.4V). 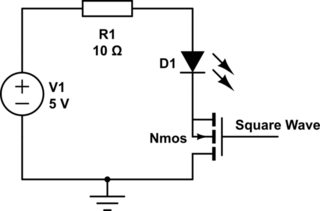 It doesn't work that way.

In one of the comments, you wrote:

To achieve low power consumption, I want to make 64 LEDs look like they are all shining with the persistence of vision effect (high enough frequency). Because then, effectively only one LED is on at any point in time, which means the power consumption of 64 LEDs shining, is just the power of one. But I want the LEDs to have sufficient brightness, so they need to be at 4.5mA. Which means, 64 LEDs lighting up (perceived by humans) is actually only drawing 4.5mA. If all 64 was on at the same time, it would draw 4.5 * 64 = 288mA.

However, this means you have to supply 288mA at all times. 1/64th of the time for the first LED, then another 1/64th for the second LED, then the third, etc... You will be supplying 288mA continuously, you'll just be alternating which LED you send it to.

Meanwhile, if you just supply 4.5mA DC to every LED, you're consuming... Also 288mA, but in a simpler way. Possibly also more efficient, as LEDs tend to get less efficient at higher power.

I'm sorry, but there is no free lunch.

There are some things you can do though:

The 2N7000 is a poor choice for high-power PWM; it's an old signal MOSFET that is not well-suited for high currents. Its \$R_{DS(on)}\$ worse than 1Ω, maybe upwards of 10Ω in your situation. Use a power MOSFET.

100mA to 300mA after testing, research and consulting the datasheet. This will give me an average current of 1.56mA to 4.69mA and the maximum I can get out of the LEDs without possibly harming them.

I'm going to switch on/off 64 LEDs with a frequency of 100Hz to give the impression that they are all on at the same time. In order to optimize power consumption I want to make sure only one LED is on at any point in time.

This is a poor way to optimize power consumption because it uses the LEDs very inefficiently. From your comments in chat, you are assuming that LED efficiency is constant and independent of how you drive it. But consider this example LED here:

If you had this specific LED, you could drive it at 500mA at obtain 120lm/w, or you could use PWM at 50% duty cycle, use 1000mA, and obtain 16% less light for the same power. Or you could go for the extremes pulse it at 8000mA for 6.25% of the time and obtain only 40 l/w, or about 30% of the original efficiency! That is a huge difference for a battery powered device! The reverse is also true, you can move to the left on the curve if you don't need a lot of brightness and get higher and higher efficiency, at least until the LED becomes too dim to use. This is an extreme case, but it shows that you might get 3-4x better battery life with this diode by minimizing peak current.

Rather than drive off the end of that curve and see how low you can get the efficiency at 1.56% duty cycle, since you have a lot of lights, want to save power and apparently don't need a lot of brightness (given the low duty cycle), you can drive your diodes at 1-2% of their nominal current and have very high efficiency. Either a constant current driver, or a constant voltage driver and a resistor will likely give you better battery life.

Of course, you should check the datasheet for the LEDs you're using (and high efficiency LEDs will come with a datasheet, so if you don't have one, consider using better LEDs). The shape of that curve varies between devices, with some flatter, other steeper. The cost of PWM will also depend on the nominal operating point you have chosen. The cost could thus be larger or smaller, but in general minimizing the variation in current (and thus using the highest possible duty cycle, ideally 100%) will reduce how much power your diodes waste as heat.

Not the answer you're looking for? Browse other questions tagged led circuit-analysis circuit-design or ask your own question.

8
Why is PWM used to control LEDs even when they're only used On or Off?

51
Does pulsing an LED at higher current yield greater apparent brightness?
2
ATtiny25 PWM LED driver with brightness control
1
Brightness control with PWM dimming LED driver LM3406/06HV
1
Driving LEDs: Brightness, efficiency and heat generation
7
Circuit to create X levels of brightness for a LED
0
Keep individual LED brightness steady when other LEDs are added or removed
0
Keeping your LED cool with PWM
4
Resistor Selection to retain same brightness in LED PWM circuit
0
How does the brightness of an LED depend on the average voltage?