Frequency response of this circuit

Can anybody help please?

Well, we have the following circuit:

Now, we know a few things:

Now, we can write:

Using the information from above we get:

Using your values we get:

This transfer function can be determined using the fast analytical techniques without resorting to a complicated KVL/KCL analysis. These FACTs derive from an original work of Hendrik Bode and were improved over the years, especially with publications from the late Dr. Middlebrook. In this particular example in which there is no zero, you start with \$s=0\$ where the inductor is replaced by a short circuit and the capacitor is open-circuited. In this mode, by inspection, you "see" a dc gain (an attenuation actually) equal to \$H_0=\frac{R_2}{R_2+R_1}\$. The left-side resistance across the source does not play a role for the transfer function \$\frac{V_{out}}{V_{in}}\$.

Then, remove the excitation (set the source to 0 V - a short circuit) and "look" through the energy-storing elements's connecting terminals to determine the resistance \$R\$ driving the inductor or the capacitor. This resistance associated with the capacitor or the inductor will form the natural time constants of this circuit. The below drawing shows how to do this: 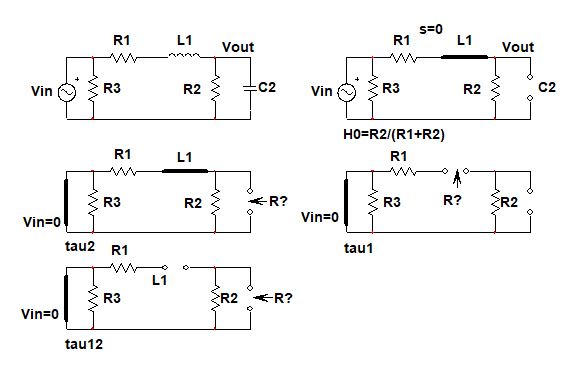 Once you have the time constants, you associate them the following way to form the denominator: \$D(s)=1+s(\tau_1+\tau_2)+s^2(\tau_1\tau_{12})\$. The Mathcad sheet shows how to do this and gives the ac response of the circuit. Some more manipulations will formalize the response and put it under a known canonical form and that is what you must learn to do: 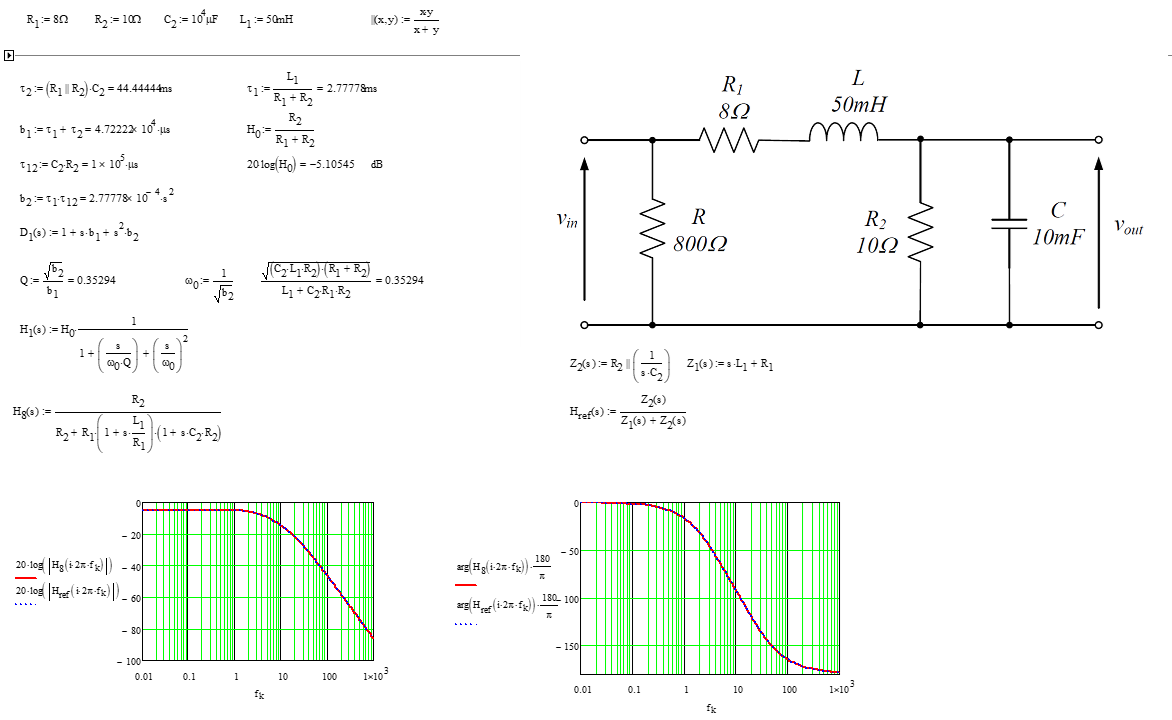 There is no resonance in this circuit as the quality factor \$Q\$ is below 0.5 and the poles are real. Considering this low \$Q\$, the transfer function could be further approximated with two cascaded poles. Please note that equation (7) in Jan's reply is not a low-entropy form where the poles clearly appear.

In this example, FACTs are the fastest way to go without mistake (the intermediate sketches can be quickly individually fixed) and without algebra (inspection means look at the schematic and determine the resistance in your head). You obtain the response in a low-entropy form where the gain (or attenuation) appears in the leading term \$H_0\$ while it is easy to rewrite the denominator in its 2nd-order normalized form.

Not the answer you're looking for? Browse other questions tagged frequency frequency-response or ask your own question.