I am trying to power a 4S-ESC to drive a BLDC motor using a buck converter and 24V,10A SMPS. However, my buck converter can only handle 10 Amps of current (safely) at 15V through its output side. Therefore, I need to make sure that the output current should not go over 10A, even if I increase the throttle input to ESC. Also, I do not want to put a relay triggered by a current sensor, since that will shutdown the power supply to my motor, which is undesirable. Thus, I want to 'limit' (or 'saturate') the current at 10A.

Is there a way to achieve this without hacking the buck converter?

If there isn't, these are the details of my buck converter-

I am also sharing some photos for the other components and their placement, 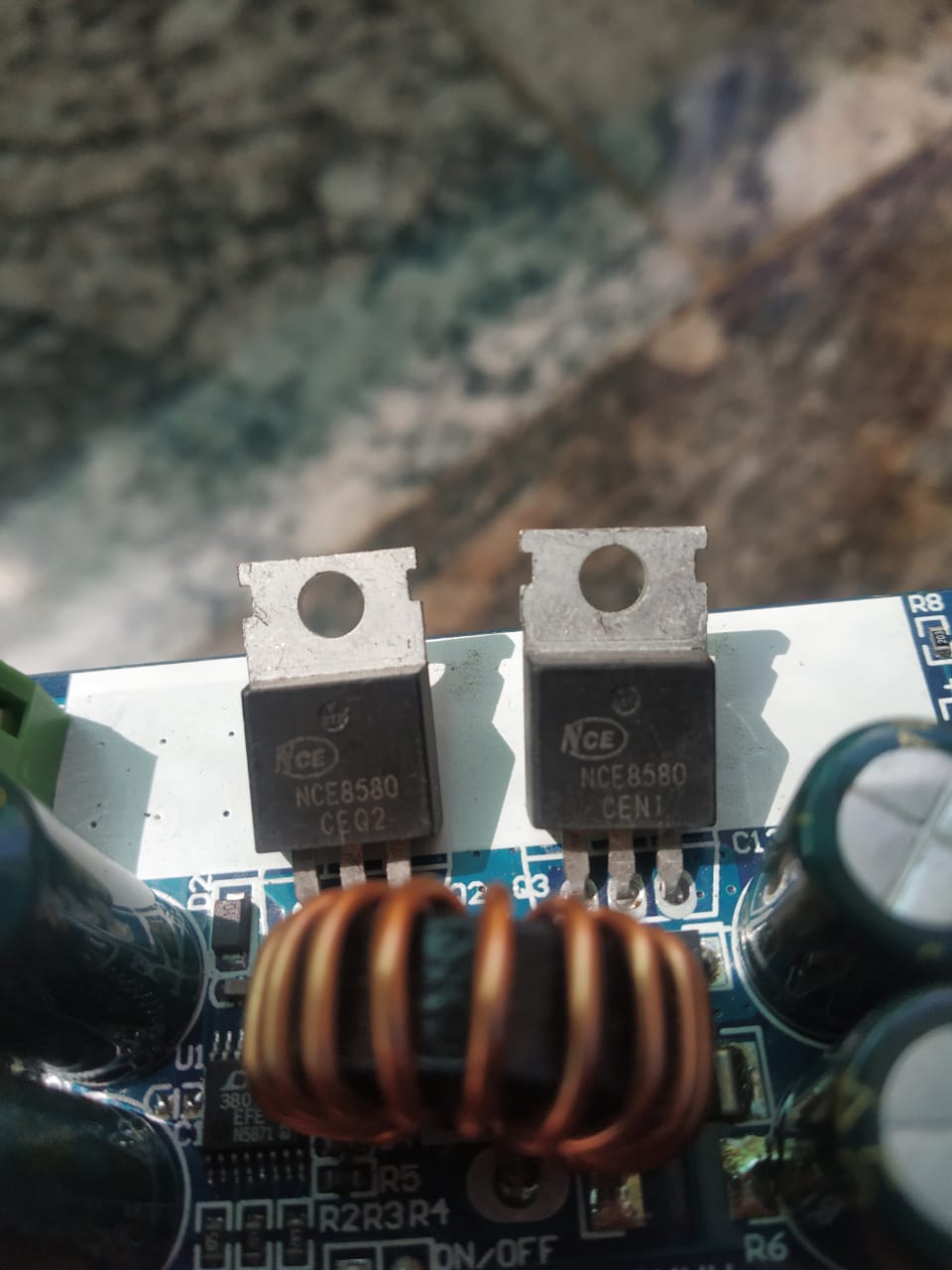 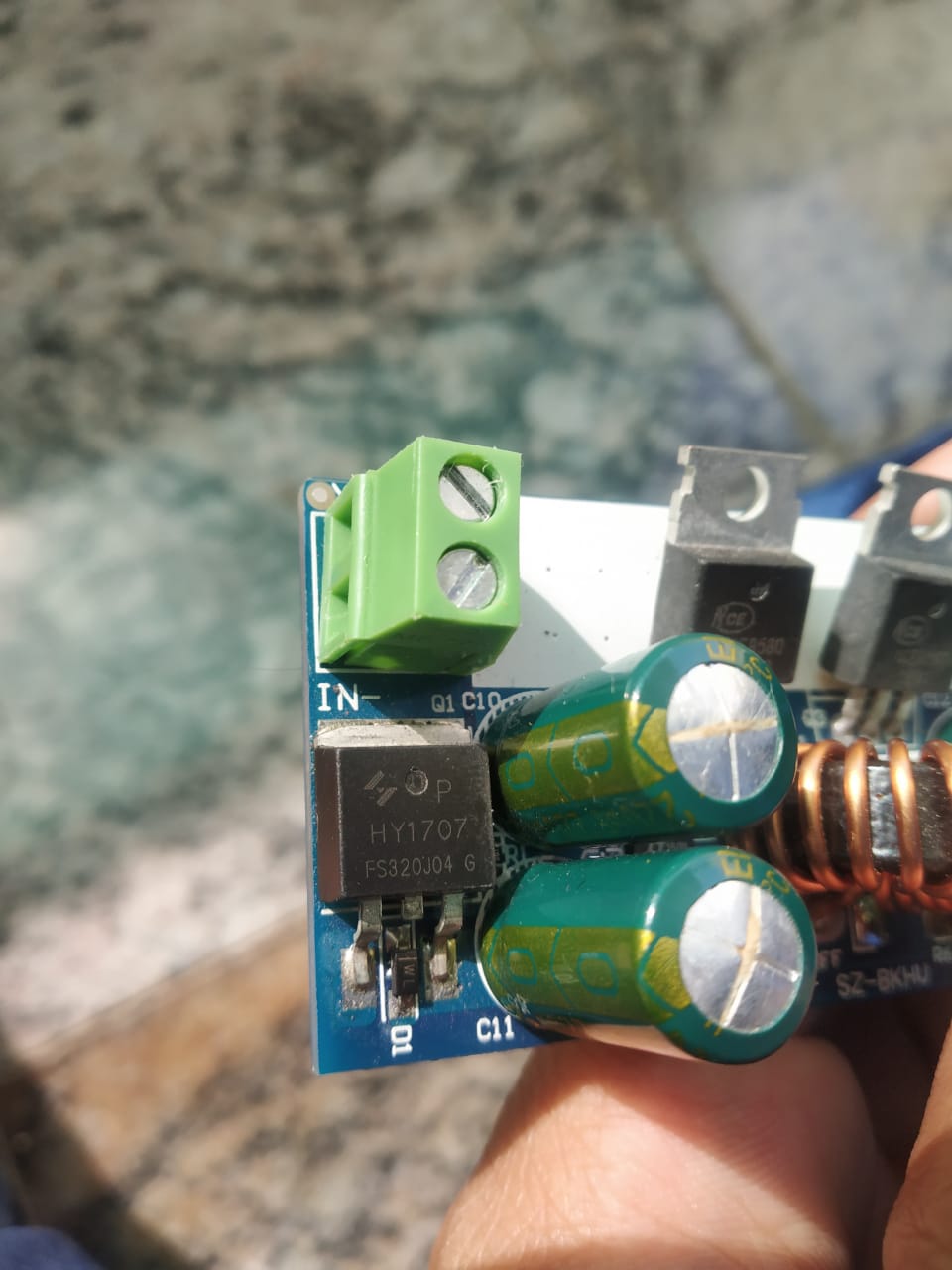 EDIT : Thank you everyone for your inputs.

The photographs are for reference only, the buck converter seen in the photo is an old one (fried it up sometime back). Also, just to make it clear, I don't want to 'cut-off' my power supply or make a 'constant current' buck. What I really want is to 'set' a max value of current for my buck so that 'no matter what' the load does not draw a higher value of current from it.

Looking to achieve exactly this (see video) for my own buck! Thanks!

You need to sense the current, one way of doing it is below circuit:

Above circuit is a simple low-side current sensing overcurrent protection. LM358 is wired as a comparator, it can't measure very accurately because it's not a rail to rail op amp but for this purpose it's good enough.

V1 is our voltage reference, using ohm's law at 10A voltage drop on R1 is going to be 1V. once it's gets above that opamp will draw it's output to the positive rail activating transistor base and drawing mosfet gate low. it will oscillate and keep the output current at 10A.

You can adjust the current to a lower value by lowering the V1 voltage.

The circuit is just an example on how it's done, of course you can measure the current at high side of the circuit etc. but it gives you an idea.

Links to ESC and motor?

The output current and power of the converter is dependant mainly on the MOSFETs used, on their heatsinking and on the main inductor.

The MOSFETS datasheet here SHOULD be capable of far far far more than 10A continuous if properly driven and properly heatsunk providing the datasheet and parts are genuine.

Any inductor failure is most likely to be due to saturation.
Saturation can be tested by examining the switching waveform when the high FET conducts as current output is increased.

A buck converter inductor when the input FET is on should have a linearly increasing current. This can usually be see moderately well by viewing Vds with an oscilloscope - where V = I x R ~= Id x Rdson. While Rdson will vary with current and other conditions this is usually 'good enough'.
When the inductor starts to experience saturation the slope of the Vdson voltage waveform starts to increase at its upper end - until it rises extremely rapidly as full saturation occurs.

If your converter shows no saturation at say 8A but starts to 'curve upwards' at 10 - 12 - 14 - 16A ... then the inductor is a likely culprit. As you have two cores (the old dead one and the new one), you could wind an inductor with about twice the saturation current using both cores and the number of turns required for the same inductance. (Number of turns depends on a few factors).
Possibly OK is to just solder the second existing inductor in parallel with the first - solder tack it to the bottom of the PCB - run at low current, and ramp up carefully to test.

Did the FETs die?

Does the heatsink get super hot?
Adequate heatsinking is essential. Adding more is easy enough.

What capacitors died - and why?

Others noted that some capacitors are 'bulged'.

Which capacitors failed? - and, why?
What is their voltage rating?
What brand?

I think I might not have explained the question properly, or you missed out the detail. I do no want to make a constant current source. I want to limit my current at a certain value. I want to achieve this thing (youtube.com/watch?v=8uoo5pAeWZI) for my own buck converter

No & no.
My answer may be of great value to you if you read it properly and do not miss out on the detail.

I at no point mentioned a constant current source EVEN THOUGH once the current limiter goes into operation, a CCS is what you will and must get.

If you address the points that I spent significant time raising and answer the questions you might get a really good result.

Vital is the 2nd paragraph, starting "Note that ...".
You MUST appreciate this point to understand the result that you are seeking.
Once your load reaches say 10A then IF you do not want it to shut down or REDUCE current then you are ASKING for a CC cct - that limits I to 10A.
If the load resistance continues to fall (IF) then Vout MUST fall to ensure that
I = V/R = 10A.
So in that mode you DO want a CC source.
This mode of operation is often termed CVCC - constant V if load allows, constant C if load does not allow Vset to be reached.

Next: My comments about the inductor are crucial.
You (seem to?) have ignored them totally.
I explained that the inductor is probably your limit and how to deal with it and suggested some options.
Your feedback would be useful.
If you are going to ask questions, and then suggest that people have not read or understood your question [which DOES indeed happen :-( :-) ], but then not read or understand or respond to input which people (not just me) have spent considerable time on, you are liable to get a lot less benefit from the site than you would otherwise.

If the video does what you want you could build the circuit.
You'll find it drops into CC mode.
Or you could consider the options that I suggest. 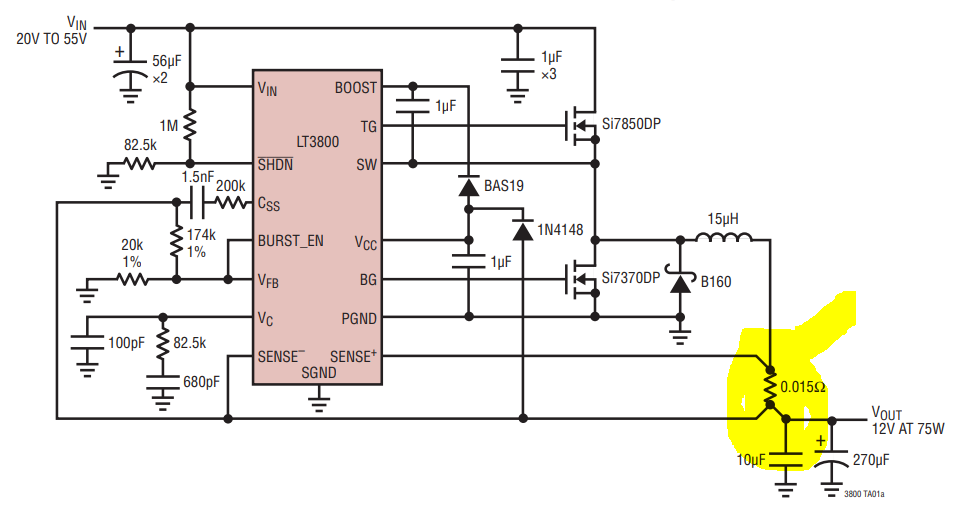 If you want to limit the output current, increase the value of the sense resistor (highlighted above).

That said, it probably won't work as the output voltage will collapse if the ESC requires more current than the limit you set. It would be better if the ESC does supported current limiting, but unfortunately it does not seem to.

It would be best to use an ESC and a power supply with matching voltage. Make sure to disable braking as this will feed voltage back into the supply. A battery can absorb it, but a switching supply can't.

Also the output caps on your buck converter are bulged. The manufacturer probably put caps with inadequate ripple current rating to save money.