I tried to build a buck converter without any ICs, just transistors, a diode and passive components. Its purpose is to convert 12V to 5V at 2 Amps. It works, but the switching MOSFET (IRF4905) heats up very quickly and I can't figure out exactly what the issue is. 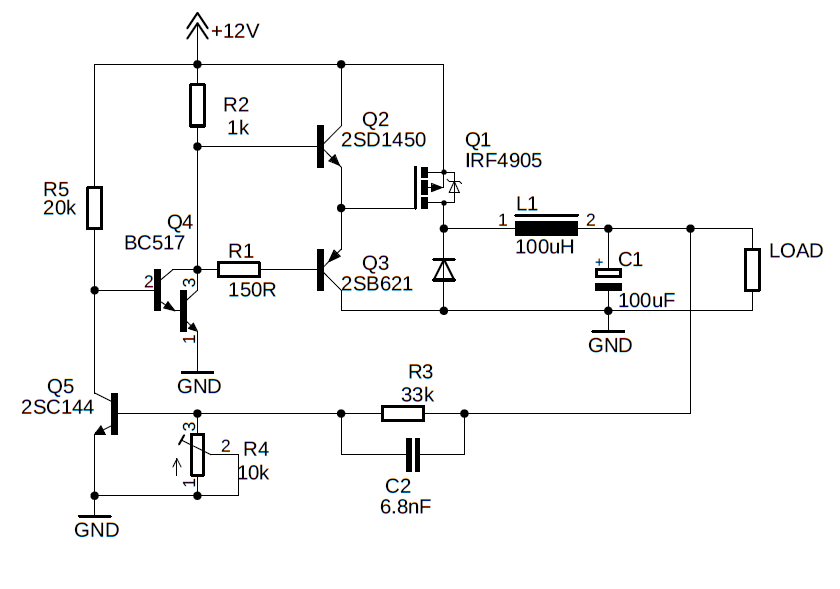 The idea was to build a sort of hysteretic buck converter. R3 and the trimmer R4 form a voltage divider, when the voltage across R4 is high enough (about 0.7V), Q5 opens and closes Q4, which closes the MOSFET. If the voltage on the output is too low, the MOSFET is open.

Does anyone know what could cause the MOSFET to heat up? Any suggestions would be appreciated.

The transistor reaches 100°C in about 2 minutes.

The transistor unmounted on a heatsink has a thermal resistance of 62 degC per watt. That is how much it will heat up if dissipating a watt of power.

5 volts at 2 amps is 10 watts and losses in the MOSFET of about 1 watt (or a little more) are a likely scenario. Modern buck regulators are quite often quoted as having an efficiency of around 95% and a home spun one will be somewhat worse than this at around 90% so, I don't think your MOSFET is doing anything out of the ordinary.

It might continue to warm of course so you should consider mounting it on a small heatsink. Note that it does have a maximum operating temperature of 175 degC.

Sorry for not updating sooner. But I finally got the circuit to work.

I followed the advice that Russell McMahon gave me and I connected a 1 Megaohm resistor in parrallel with a 220pF capacitor from the base of Q5 to the collector of Q4. This should add positive feedback to the regulator.

The MOSFET barely heats up now and I measured the efficiency of the circuit to be around 81% with an input voltage of 12V and output of 5V at 2A. I will try to optimize it further but I think that most of the losses are from the freewheeling diode. A synchronous buck converter would be too complicated to make with discrete components, so I'll leave the diode.

It works better than I originally expected. And it should be possible to improve it further.

In the absence of a scope, I'd simulate that and see what's happening.

Probably what's going on is that you're correct and the FET isn't getting switched fast enough. Probably the least that you need to do is to add some positive feedback to the amplification stage at Q5. If I were determined to keep the circuit to only transistors, I'd add a capacitively-coupled PNP stage there that's set up with positive feedback so that Q5 switches, well, positively.

Here is an LTspice simulation of the schematic. Slightly different components were used due to library limitations, but even with these changes, the simulation works: 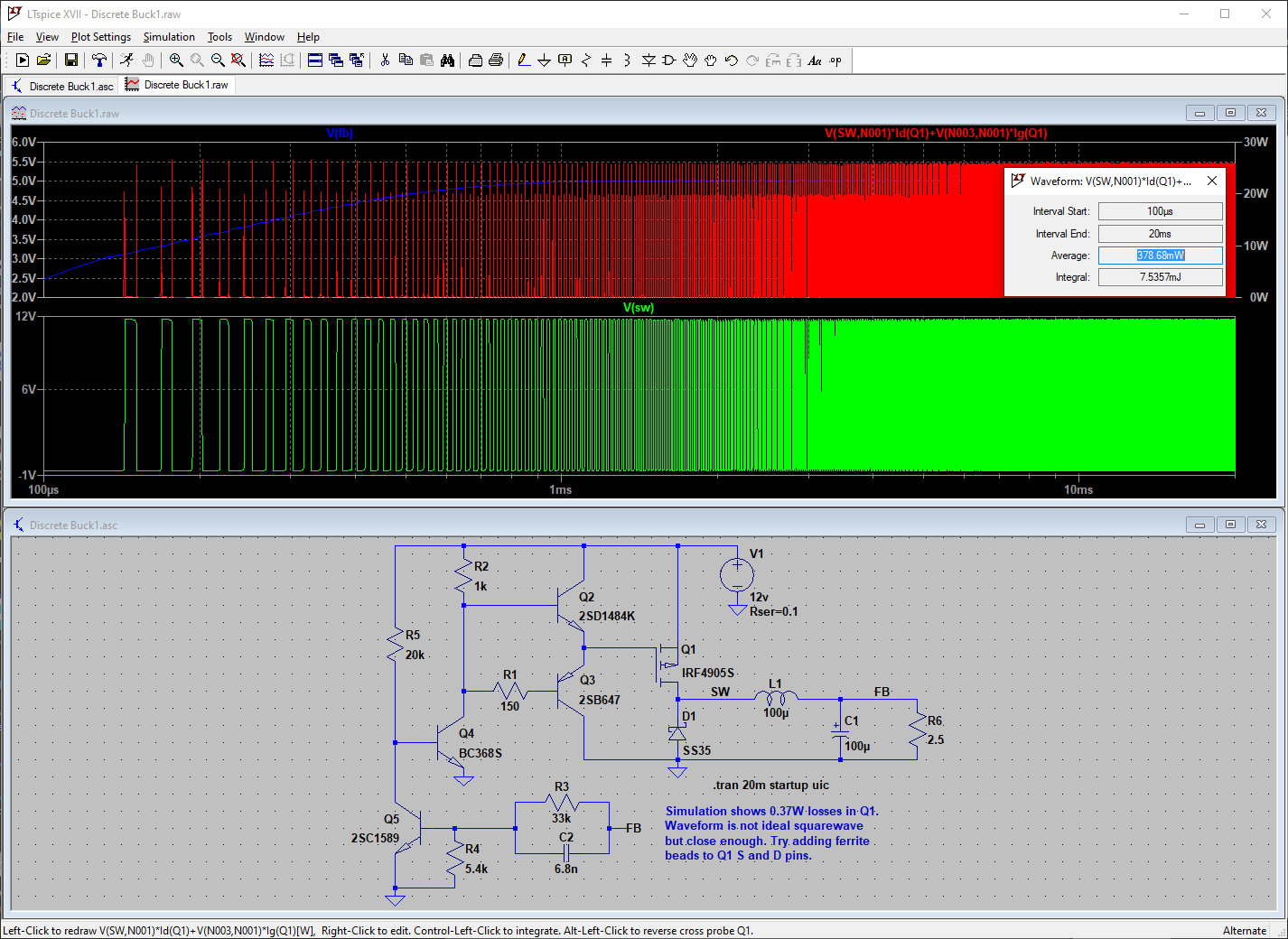 The traces are plotted logarithmically to try and show both small and large-scale detail.

So the simulation looks promising. But the only way to know for certain what the circuit is doing is to 'scope the gate lead of Q1. The simulation does hint at some non-ideal rounding and delay on the gate lead, but it's not too bad considering the spartan component count. Another possibility is high-frequency ringing at the switched node; if you have any ferrite beads, try adding one to Q1. Short of that, you'll have to get an oscilloscope.

Here is the .asc file:

I also agree with Hearth that your FET (R DS(on) = 0.02Ω) was operating in partial linear mode except you were able to measure a frequency of 42kHz at 5V 2A.

I suggest this design is inferior because the oscillator is not stable and depends on parasitics with phase margin reduced by the 5 transistor stages and Series Resonant Frequency of a couple hundred Hz with selected LC values.

The FET is overkill for a 2 A load rated for > 50A with 260A peaks but that adds to the Coss and very low RdsOn to cause spurious resonance where the phase margin must be negative in order to sustain oscillation.

There may be ways to increase the gate drive to a sharp pulse but it is not worth the overkill on FET switch and unstable design.

The PFET also guarantees high inrush power on start driving the ESR of the load capacitor then the inductor saturates.

All around , I'd say it's not surprising that it can regulate or oscillate but the load regulation is terrible without a voltage reference and step load overshoot for a wide range of loads would be terrible.

I've run a simulation, and it doesn't look like your FET is switching at all. I think you may have built what amounts to a linear regulator, instead of a switching one; there's some oscillatory behavior when the potentiometer is changed, but it decays away into a stable linear mode rather quickly.

Under the assumption that you have accidentally made a linear regulator, the switching element heating up is to be expected. With the 2.5 Ω load, the power dissipation in the transistor is over 13 watts, which is more than enough to heat it substantially even with a decently-sized heatsink.

Not the answer you're looking for? Browse other questions tagged power-supply mosfet switch-mode-power-supply buck or ask your own question.