Is the zeta DC-DC converter topology scalable to 50kW / hundreds of amps?

The task at hand is to build a 50kW (e.g. say 125VDC 400A out) DC-DC converter that charges a large lead-acid stack with said 400A and accepts a somewhat wide input voltage range. With that in mind, if we allow the input voltage range to be 50-260V, the converter topology will need to be zeta (or similar - buck-boost, SEPIC, Ćuk). If I instead ensure the input voltage is always higher than the output (e.g. 150-800), then the buck topology is likely the best choice (multi-phase buck, a vastly scaled up version of the 12V->Vcore part in modern PC motherboards). The zeta topology however gives me more flexibility in the specific application, so I'm wondering - could it also be scaled to such power levels?

Some guys are building an electric motor testing bench, and the part that I might get involved is the powerful DC-DC converter for energy recuperation. The idea is that a stack of power lead-acid cells (forklift-duty types) would power an ESC, which commands the Motor Under Test. Another, larger motor, would act as a mechanical load to the M.U.T. That second motor, operated as a generator, would recuperate the energy back into the battery stack through a DC-DC converter, which should have programmable target output power (so that we can modulate the torque that the M.U.T. has to provide in order to keep the set RPM).

More current to the battery leads to more mechanical torque, so the M.U.T. will draw even more current to keep up, so in the end the battery will still be drained, but only with the power lost as inefficiencies in the system - not the full 50 kW.

I've read a Microchip app note (High-Power CC/CV Battery Charger Using an Inverse SEPIC (Zeta) Topology) which presents a 100W charger in the same general direction. The central part of the converter is this: 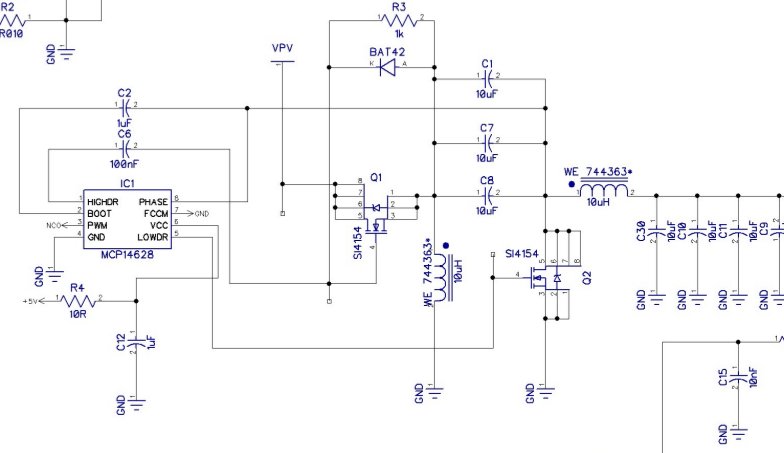 I was thinking that maybe, maybe, if I uprate the power components for voltage and current, and provide many more parallel copies of C1,C7,C8, Q1, Q2, the circuit can be scaled to tens of kW. Then it would give me more flexibility, as this way I don't need to worry about the corner cases that the other option has.

Instead I can push the guys to select a motor with a very low Kv for the generator (or use a transformer after it), so that the input voltage to the DC-DC converter is always higher than the desired output. This either calls for a motor with ridiculously low Kv, or a 3-phase transformer, if I want to cover the worst possible case: battery voltage 120V, test at low RPM. The transformer options is likely the best, if also provided with bypass contactors to handle the low battery voltage case as well (to avoid ridiculously large input:output voltage ratios).

The problem with the Ćuk, SEPIC & zeta converters are that they carry considerable power in the filter capacitors, and they need multiple inductors. So they may not scale as well as other options.

A 4-switch buck-boost should scale better than the above options, because you'll only need one inductor and one set of filter caps, at the expense of needing four switches.

I think if I were you I'd explore a multi-phase 4-switch (per bank) buck boost. I know that if I were the one doing this there'd be a microcontroller controlling it, but whether you do that or seek out some controller chips that'll do the job for you is a strategic decision that depends on the team you have available.

Sure the Zeta does not scale too well to 50Kw. Buck or boost would scale better.

If you want to load up your DC motors and recycle energy then have you considered a wound field machine? This could be another forklift motor or maybe an alternator. With this approach the power that you need to control is a small fraction of 50 kW.

Not the answer you're looking for? Browse other questions tagged power-electronics dc-dc-converter buck or ask your own question.

3
To what extent are alternators “flexible” to variations in input speed and output voltage?