What is the State of a MOSFET with a Constant Source Current and Floating Gate? 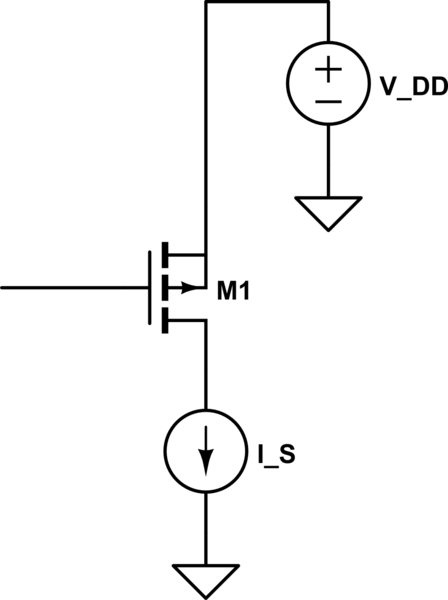 Suppose we have a NMOS transistor, with and ideal current source (I_S) in its source. The drain is connected to V_DD, and the gate is just floating. It certainly cannot be cut-off since we have forced a current in its source, but is it triode or saturated? What if we change the MOS transistor to a BJT?

Your schematic shows a P-channel MOSFET, but operation is the same for NMOS.

When the Gate is 'floating' it will have a voltage determined by whatever charge was stored on it before being put in the circuit. So it might be cut off or it not might not be, depending on its previous history.

An 'ideal' MOSFET has no leakage and no breakdown voltage. If your circuit had only 'ideal' components and VGS was zero, then the ideal FET would be perfectly cut off and the ideal current would produce infinite voltage across it (which is impossible of course, but when an unstoppable current meets infinite resistance...).

But real FETs do have these 'flaws', so in practice it would at least pass the constant current corresponding to the leakage current at the voltage required to produce it. If the constant current was higher than the leakage current at normal operating voltage then VDS would increase until it reached the avalanche breakdown region, where the FET would act like a Zener.

If the floating Gate had sufficient charge to turn the FET on enough to keep VDS below the breakdown voltage then it would either be in the linear or saturated region, depending on VDS and ID. 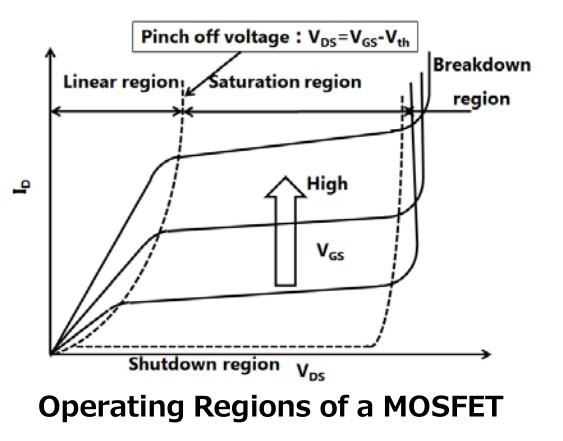 Bipolar transistors behave similarly, except the Base needs continuous current to keep the transistor turned on. So if the Base was open circuit the transistor would stay cut off until reaching its breakdown voltage. The curve trace below was taken from a PNP transistor rated for a maximum VCEO of -25V. It shows a smooth breakdown transition at ~-30V, drawing ~6mA at -35V. (the sharp drop at the bottom left of the curve is caused by reverse Base-Emitter breakdown at ~+6V).

Many bipolar transistors have a negative resistance characteristic in the breakdown region, where as current increases the voltage drops to a lower value called VCEO(sus) (sustaining voltage). This shows up on the curve tracer as an instability at the breakdown transition. 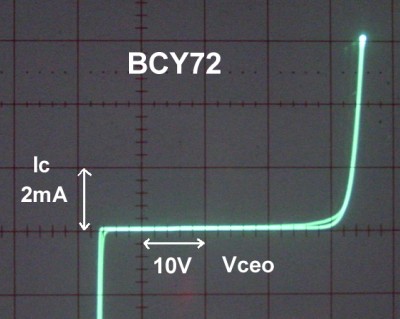 Not the answer you're looking for? Browse other questions tagged transistors mosfet circuit-analysis bjt or ask your own question.

7
Why do we assume VGS<Vth and Vds>0 for a mosfet in cuttoff and Vce>0 for a BJT in cutoff?
0
How does the signal change cause a current change in this circuit?
3
What is the use of the line connecting drain and gate in current mirror using voltage bias?
0
MOSFET has constant current
1
What happens to a MOSFET if i apply voltage between Drain and Source leaving the Gate floating?
5
What is the purpose of this NMOS transistor on an I/O pin?
1
Using a single power source for both the gate and source of my transistor?
0
What is the relationship between MOSFET gate voltage and source voltage?
2
BJT triode region