Looking for a explanation/cause of lithium polymer battery failure

I'm hoping that someone on the EE StackExchange could give me some insight into what is going on with some lithium polymer batteries that I have under test.

The question I am trying to answer is: what conditions/causes lead to the type of failure mode described below?

I have a fixture that automatically charges and discharges a group of candidate batteries while logging battery voltage so that I can gauge battery operation and usable life. The fixture uses an MCP73837-FCI/UN Lithium Ion/ Lithium Poly charger IC to charge my batteries at a rate of ~65mA. Once they are all at full charge (4.2V or so - I go by the status flags of the MCP73837), the fixture disconnects the charge IC from the power source via a relay, connects into a load circuit, and begins discharging against a load that varies between 30mA and 80mA duty cycled at 80% at a rate of 74Hz (see below). The load is independent of battery voltage.

I am testing 3 different lithium polymer batteries in my setup:

After about 10 or so charge/discharge cycles, 3 samples of the 200mAh battery began exhibiting poor battery life. Physically, the affected batteries increased in size (thickness) by 20-30% from their pre-evaluation measurements and have noticeable ruptures / rips in their pouch (picture of affected battery included below): 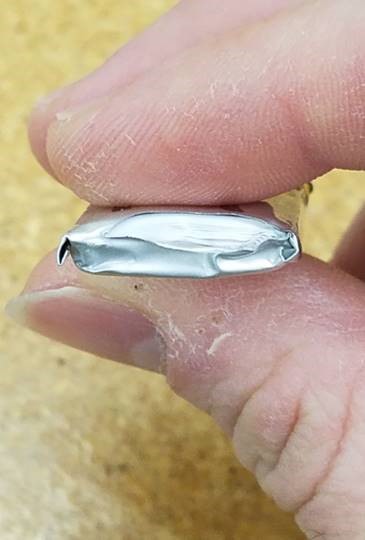 The batteries seem to have rigidly increased in volume. This does not seem to be just a battery outgassing event.

Some insight into this phenomena from someone with some general lithium polymer / battery testing / battery chemistry expertise would be very much appreciated.

There might be some interesting oscillation going on between the MCP73837 and the DW01;

If the MCP73837 triggers (Vbat > VOCP) the DW01 in either "FAST CHARGE MODE" or "CONSTANT VOLTAGE MODE", the battery will 'disconnect' and the parallel capacitor will fully charge and put the MCP73837 in "CHARGE COMPLETE MODE".

The MCP73837 goes back into "FAST CHARGE MODE" if the voltage drops below some threshold (Vbat < Vrth).

That will happen eventually because the capacitor will lose charge... however before it reaches that point it is possible that the DW01 resets (Vbat < VOCR) and the battery is 'connected' again.

You could try removing the DW01 from a couple of fresh batteries and see if the problem persists with charging. If it stops you know the two ICs aren't playing along nicely.

I think you are simply exceeding the C rating of the one battery type that fails - small LiPo cells can have an intended C of 0.1 or less, and you are intermittent loading them to 0.4C.

Note: 1C is equivalent to one full battery capacity of charge, so 200mA output would be 1C.

Not the answer you're looking for? Browse other questions tagged batteries battery-charging battery-chemistry lithium-poly stress-testing or ask your own question.