Torque of motor vs operation as generator

While trying to work out which motor to use for a wind turbine project, I'm coming across torque numbers for DC motors. I'm mainly looking at a BLDC motor right now.

So, is there any relation between motor torque and/or wattage with its generator torque? Or more in general, how does one decide which motor is best for a given set of blades?

So, is there any relation between motor torque and/or wattage with its generator torque?

Generally yes. To a pretty good first approximation, the torque that a DC motor gives for a given current is equal to the torque that same machine will need to absorb to deliver the same current as a generator. The biggest difference will be the machine's friction torque, which is always a loss either way.

For an ideal DC machine, as long as there is no current, there is no torque. So in that sense "startup torque" is entirely under your control, or at least under the control of the electronics you use.

Typically what's not ideal about a DC machine is the friction torque and cogging torque. These are often not well specified in datasheets (and aren't specified at all if you're buying a motor for hobbyist or consumer use, such as an RC plane motor).

Or more in general, how does one decide which motor is best for a given set of blades?

You find the speed and torque at which the blades are most efficient, and you find a machine that will absorb that torque at that speed -- or you choose to drive the motor through a set of gears (probably step-up) to spin the motor at a different speed, while absorbing the same power.

Then you figure out the speeds and whatnot for when the wind conditions aren't ideal (most especially you check what happens if the turbine goes overspeed), and you deal with those.

The minimum torque required to get the shaft turning is essentially the bearing friction. With a simple brushless DC motor, reluctance torque must also be considered. Reluctance torque is the torque that tends to hold the rotor in a specific position when there is no electrical load connected to the generator.

To start the generator with an electrical load connected, you need to determine at what voltage the voltage converter connected to the output begins to operate and supply power to the load.

For minimum speed operation, you must to determine the losses that must be supplied or the point at which the input mechanical power exceeds the losses. That may be pretty difficult to do analytically. It may be easier to test the motor and electronic controller.

It works both ways for motor and generator mode.

The more blades your turbine has, the faster it will rotate for a given wind speed. 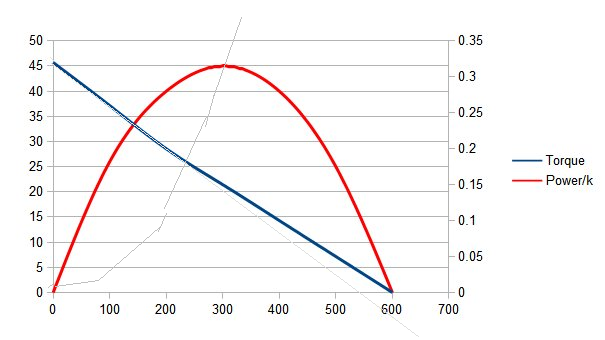 The generator will have some frictional load but nothing else unless current=torque is drawn. Maximum Power Transfer Theorem applies to both mechanics and electrical systems which states that the Impedances must be matched at all times to transfer maximum power.

For PV solar cells which act as current sources with an open cct voltage a, Voc and a short circuit current Isc, that impedance is Voc/Isc=Zpv.

For a battery the maximum power is not safe for more than xx seconds at a time as this creates too much outgassing and temp. rise. For a car battery the CCA rating is 30 seconds like in the coldest weather with a hardened oil friction engine turn an engine slowly up to the CCA current rating where the voltage drops from 12 to 7V during rotation at the CCA rating sustained for only 30 seconds.

For a wind generator, it has no torque to drive a generator until a threshold RPM then that has a torque and power curve vs RPM that is more quadratic.

The power drain from a battery charger depends on CC or CV so it is more flat power during CC mode or slightly rising then declining in CV mode as current declines.

So a Maximum Power Point Tracking (MPPT) is need that hunts or has a smart algorithm to regulate the load to match the product of the Turbine * DC Generator * Battery Charger. I suspect this looks like a 0 curve up to x RPM then a steep linear curve up to the RPM that matches the desired wind speed to max power of the generator. Inertial or friction speed brakes are need to govern over-speed or using the generator into a short circuit if not power is needed.

It sounds more complicated than a basic solution.

If the DC voltage out is matched to the battery charger at some adequate RPM then the charger will regulate the turbine RPM to that speed. It may not be optimal power but at least it will start no load until it reaches the charger Vmin enable threshold.

Then a means to enable higher RPM with wind speed is needed.

My 1st design was a VLF Doppler GPS used in Arctic Ocean floating-automated weather station in 1976 with a 750W vertical axis Wind Turbine that operated at 5 MPH start speed.

Not the answer you're looking for? Browse other questions tagged brushless-dc-motor generator windturbine or ask your own question.

1
Are permanent-magnet motors equally (in)efficient as motors vs. as generators?
0
Looking for confirmation of a BLDC project

3
bldc motor torque controller
0
Brushed DC motor as generator, characterising the motor
0
Is it good idea to charge a battery from a starter-capacitor of an AC generator?
0
What electric setup do I need to get electricity from a BLDC motor?
3
Wind-powered fairy lights + battery charger: preliminary help
0
ICE-electric transmission drivetrain parameters
0
Choosing the best DC motor to use as a generator