The datasheet for the LM339 quad open-drain comparator shows the absolute max values:

However, I'm surprised and wary, because it's common that device inputs can't go much above the supply rail. Then again, I can imagine comparators being unusual in this respect, and if that were the case here, I'd expect to see the input defined as \$V_{I} \le V_{cc}+0.6V\$, or similar.

Have you used an LM339 like this, and was it fine? I've been looking for a circuit diagram of the internals of the device, but I'm struggling to find anything that makes it crystal clear. I don't want to find out in a year's time that we're gently destroying them!

"Absolute maximum ratings" are about not destroying the device. "Electrical characteristics" or "Recommended operating conditions" are about proper functionality. For example, a supply voltage of zero volts is perfectly safe (well within maximum ratings!) but of course the device won't operate...

So, your voltage seems allowed by max. ratings, but will the comparator compare?

"Electrical Characteristics" in the datasheet:

There is fine print:

What's important is "will provide a proper output". Some comparators/opamps will misbehave or reverse the output if input voltage is outside correct operating conditions (but still inside maximum ratings), for example. In this case it will work. Datasheet page 13 confirms: 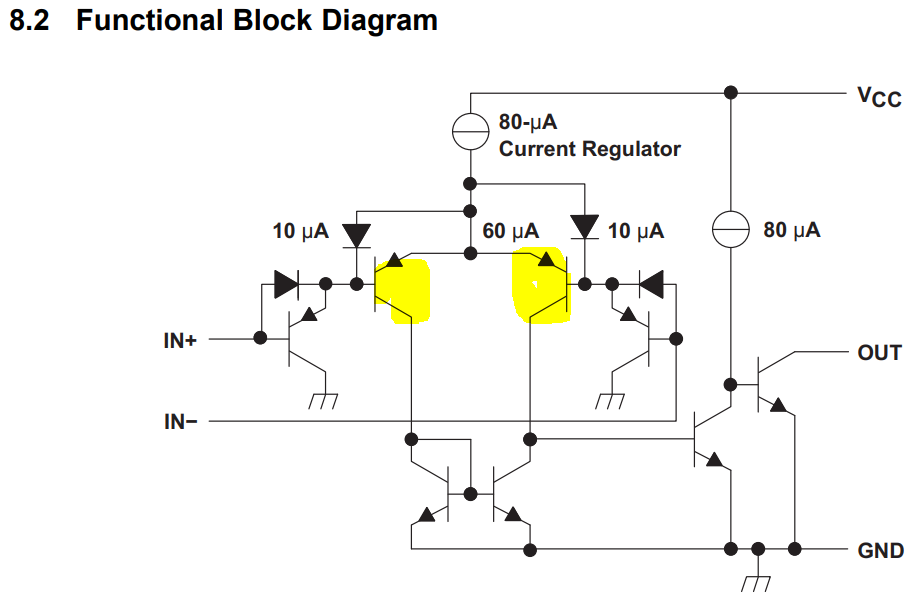 (3) The voltage at either input or common-mode must not be allowed to go negative by more than 0.3 V. The upper end of the commonmode voltage range is VCC+ – 1.5 V; however, one input can exceed VCC, and the comparator will provide a proper output state as long as the other input remains in the common-mode range. Either or both inputs can go to 30 V without damage. 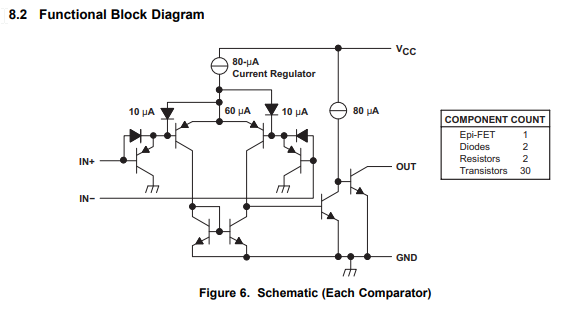 Figure 6 of the datasheet shows the internal circuitry.

(3) The voltage at either input or common-mode must not be allowed to go negative by more than 0.3 V. The upper end of the common-mode voltage range is VCC+ –1.5 V; however, one input can exceed VCC, and the comparator will provide a proper output state as long as the other input remains in the common-mode range. Either or both inputs can go to 30 V without damage.

Based on this information, you should be OK with your intended use of the '339.

According to the spec, that should be fine.

(Edit) I missed a note in the data sheet on this my first time around. It appears that you can exceed VCC on one input pin (but not both). If it's important not to load the 100k-ohm input, you may want to check how much current flows in this circumstance. It's almost certainly different from normal, although it's not clear to me how much different.

I have ranted on the Internet innumerable times about reading the datasheet carefully, for every clause. Clearly I failed in this case...

I want to compare a (fairly weak, 100k impedance) 0𝑉 to +15𝑉 input signal against a +3𝑉 reference, while powering the device from a +5𝑉 supply.

There's two issues here. One is whether you can mess with the signal -- i.e., is it OK to load it down, or do other things depend on it not being disturbed. The other is how accurate your measurement needs to be.

The LM339 has between 25nA and 300nA of bias current that flows out of the input pins, depending on temperature and luck. Working against a \$100 \mathrm{k\Omega}\$ source impedance, that's 2.5mV to 30mV of error in your switching point -- can you stand that? If not, you can correct for it with a resistor in the opposite lead (R2 in the schematic below). That'll bring the error down to \$100 \mathrm{k\Omega}\$ times the input bias current, or 0.3mV to 10mV.

If you want to avoid that you can use a rail-rail comparator with CMOS input, but you probably won't luck out on being able to pull an input higher than VCC, and you'll load the signal down. If you can load the thing down, then the circuit below may work for you -- D1 won't conduct significantly until the input signal is positively above 3V, and it'll limit the non-inverting input of the comparator to around 3.7V.

R1 is just there in case you want to load the source less (but be careful of the LM339 input bias current -- I don't know what it is, so you need to check to see how much it'll throw off your measurement, or you'll want to use a JFET or CMOS input device).