What is an open collector?

I am new to electronics, and I'm reading a book on embedded systems and bumped into an "Open Collector". I know that a transistor has a base, which acts like a switch for the current to flow from collector to emitter, but what does open collector mean?

What is it (in simple terms!), what does it do, and where to use it?

The picture below shows the one I got stuck on. For the record, don't ask me about what COM signal means.. The picture is something called a darlington transistor. (From the book "Introduction to ARM cortex M microcontrollers") 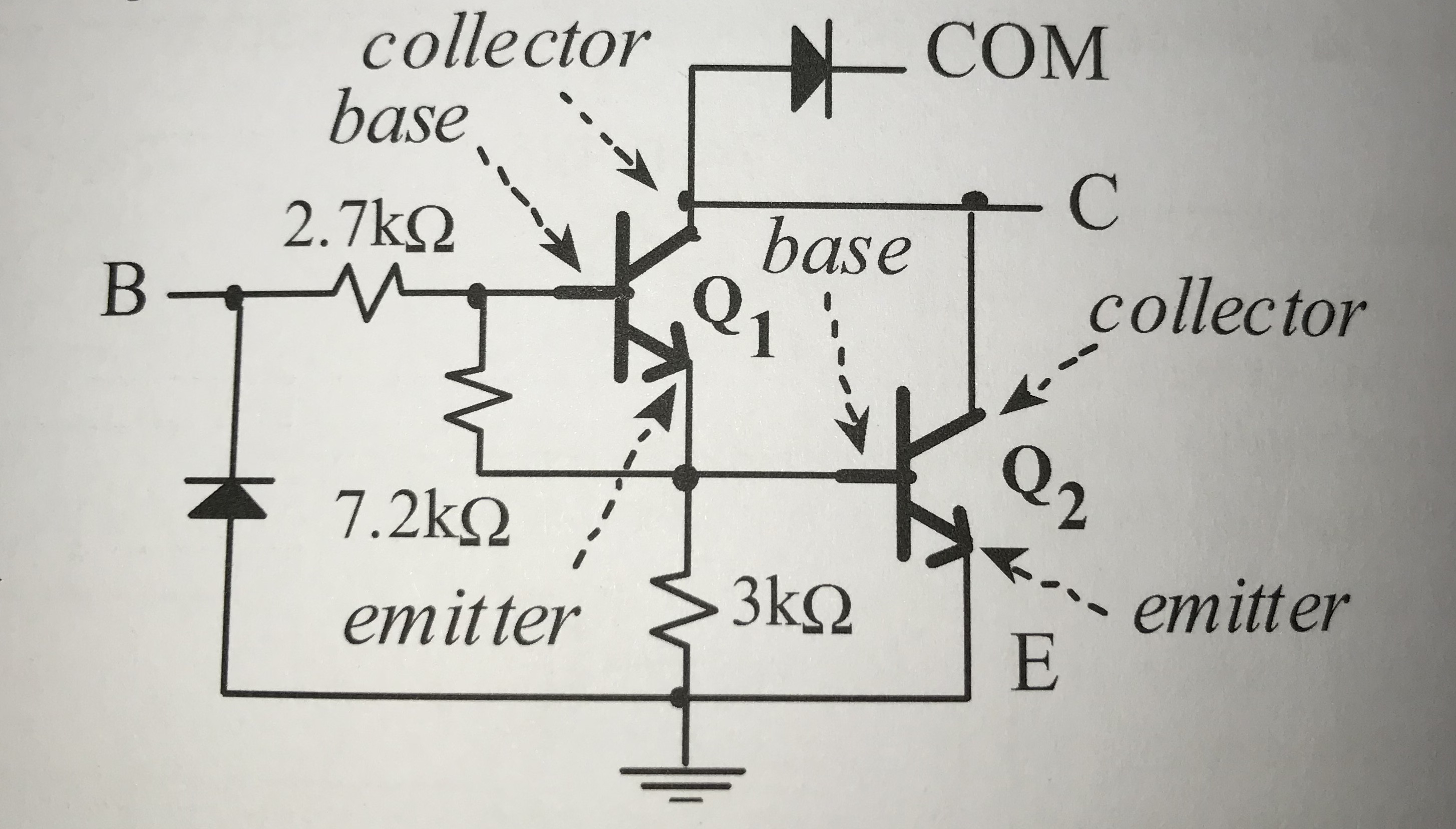 With that aside, let's answer your question...

Open-collector is a type of switched load driver circuit, along with open-emitter and push-pull. The terms 'open-collector' and 'open-emitter' are used when the switching component is a bipolar junction transistor (BJT), as collector and emitter are BJT terminals. If the switches are FETs, 'open-drain' and 'open-source' are used.

In a switched driver, the output transistors are either switched hard on (saturated) or switched hard off, never partially conducting. They act like simple on/off switches. In reality, there's more going on than that but the simple view lets us grasp the basics.

The comprehensive switching driver circuit to use is a push-pull output. This consists of two switching transistors - FETs in the example below. 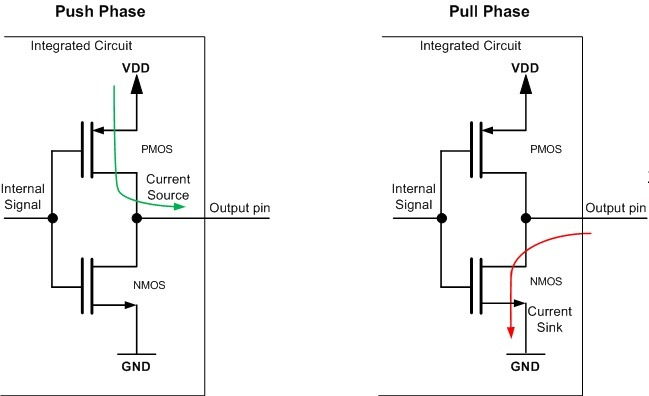 When one FET is on, the other one is off, so the the circuit has two driving states:

(1) When the upper FET is ON, the lower FET is OFF and the circuit is driving a 'high' voltage that can source (supply) current to its output.

(2) When the upper FET is OFF, the lower FET is ON and the circuit is driving a 'low' voltage that can sink (take) current from its output.

A open-collector driver is a BJT circuit containing the lower transistor that sinks current but no upper transistor to source any current. Again, when FETs are used it's called an open-drain driver.

As shown in the diagram below, the push-pull FET circuit (left) has had the upper FET removed to make an open-drain driver (middle). When the lower FET (middle) is ON, current can flow through the transistor to GND. When the lower FET is OFF, there is no current flow and the output is said to be at 'high impedance', or 'floating' if not connected to anything.

An external circuit must supply the current to flow through the lower FET. This could be a pull-up resistor (right).

In a similar way, the open-source driver FET circuit has an upper transistor and no lower transistor. It can supply current to the output or be at high impedance.

All three driver circuits are illustrated in these FET circuits. 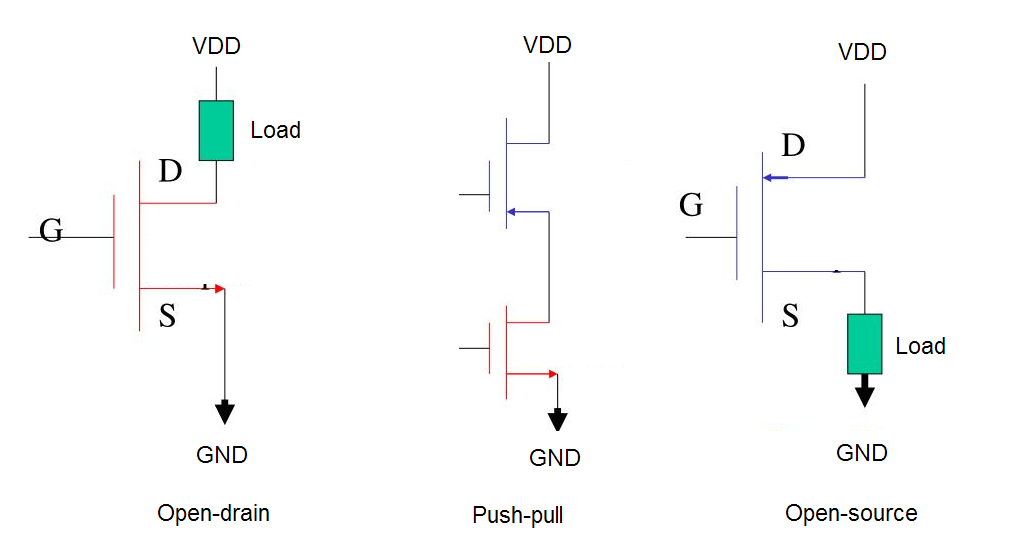 There is plenty more you can read up yourself on the internet on these circuits. But this should give you the basics to find, understand and learn it.

It means the collector pin on the output NPN is open when in the HI state. As in it's not connected to a pull-up transistor and can actively drive the output HI.

That means it can only actively drive the output LO, or disconnect it. That means you have to provide a means to bring the output HI (like a pull-up transistor), or in some cases you don't care if the output is HI as much as you only care if it is conducting current or not(like to drive an LED), in which case you don't worry about a pull-up resistor and just connect the LED to it accordingly.

The benefit of an open collector lies it the fact that when the transistor is not conducting, the voltage of the output is either floating or driven by other external components.
In this way, you can connect multiple open collector outputs to each other.

The schematic you show is a partial schematic of a ULN2003A or similar Darlington driver array. COM is a common rail (typically) used for the catch (flyback) diodes when inductive loads are being switched.

The two collectors connected together do go to the diode so they're not completely open, but that diode does not normally conduct- only briefly when an inductive load is switched off, so ignore it for the purposes of this discussion.

A Darlington pair is sort of a compound transistor with very high current gain. The usual textbook depiction is two transistors connected thusly:

The practical circuit in the ULN2003A includes resistors to make sure the gain is not excessively high and a parasitic diode is also shown.

The collectors in both the Darlington pair and the simple BJT are "open". If you drive the inputs with a (say) 0V/5V you won't see much voltage at the collector, they need a load from the collector to some positive rail (such as a pull-up resistor) to get substantial current to flow.

The open-collector (rather than having a resistor or some active circuit as a pull-up) allows to to use a higher voltage than the logic supply, for example, if the ratings allow. You can use an open-collector output ULN2003A to switch a 24V relay from a 5V or 3.3V logic level (since relays are inductive you'd tie COM to +24).

Many analog comparators have open-collector outputs- that allows outputs to be directly tied together with a single pull up resistor such that the output only goes high if all the transistors are off. That's useful, for example for making a window comparator which detects when a voltage is within a certain range.

Not the answer you're looking for? Browse other questions tagged transistors embedded darlington open-collector or ask your own question.

1
Can I use a ULN2003A IC as many transistor switches?

2
What is “pull the collector below ground” and saturation
4
Why Increasing Collector Voltage Reduces Collector-base Capacitance
1
Opto-coupler connection
0
Understanding Proper Implementation Of Open-Collector
2
NPN transistor wired correctly?
0
The collector current of BJT
1
Common base configuration impedence
0
What does fall and rise of clock mean?
0
How do the collector and emitter terminals of a BJT operate when no power supply is present?