I'v found myself in need of a new preamp for my turntable (the one built into my power-amp went out with a bang and tripped the breaker!).

I'm using a moving magnet type cartridge with output around 5mv, I would like high gain to around 1v peak to peak, must include RIAA compensation and a simple and preferably cheap design with good sound that can be powered with a 'wall-wart' type mains adaptor.

After a little research I found a design by Boozhound Laboratories that is very simple and seems to have very good reviews/reputation.

This is the Boozhound Laboratories circuit (rev3): 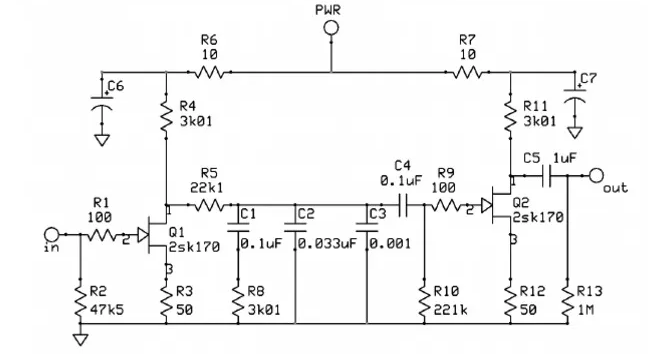 So I copied the circuit into LTSpice to see how it would preform, swapping the 2sk170 for lsk170a as I'v heard original 2sk170's are tough to find.

The circuit had less output than I wanted at only about 620mv from a 10mv input (peak to peak voltage) and fairly high distortion at 0.178% mainly all second harmonic.

So I changed the drain resistors to 4.7k witch increased output to 1300mv but also increased distortion to 0.249%:

Unhappy with that amount of THD, I decided to try and do better with my own transistor based design:

My question is shall I go with the Boozhound labs design that has a good reputation, despite its high distortion and use fake jfets, or my own circuit that I'm really not sure on transistor noise, how it will sound and dislike the need for more caps (C1 and C2 for added gain).

I would also like to improve power supply noise rejection. Would a simple voltage regulator (like LM317), capacitors and perhaps a inductor be good enough?

Browse other questions tagged transistors amplifier audio jfet or ask your own question.