Logical reading (1 or 0) of a micro-controller input GPIO pin may float if it is neither connected to VCC nor GND; someone said it is because of surrounding RF interference.

When a floating GPIO input pin voltage is affected by RF interference that makes it fall in the undefined logical range (i.e. 0.8V - 2.2V for Raspberry Pi), it can cause the logical value of a floating pin to change.

I wonder if this problem could be solved by how a microcontroller is designed. i.e. Enlarge the logical voltage range, say <6V for low >6V for high. Since interference may seldom reach such high level voltage.

tl;dr increasing IO rail swing has drawbacks, and also doesn't help because static charge can still swing to either rail.

To start, there are tons of practical reasons why we don't just increase I/O voltage. It's not as simple as some guy crossing out 3.3v on a piece of paper and writing 12v instead. Modern CMOS processes for processors are designed to create thin gate oxides for fast, low-voltage devices. The processing steps needed to grow a thick gate oxide would be both costly and adversely affect performance and yield. The nice thing about a lot of cheap ICs is that they have a simple process--a 3v3 chip might have all gate oxides grown to withstand 3.3v+safety factor. You've now introduced multiple new masks (plus photoresist and etching steps), perhaps doubling or tripling the price of the chip.

Likewise, power dissipation for high-speed circuitry would be an issue. Especially for fast signals, high voltage swings imply high power dissipation (on the order of voltage squared) due to capacitances and series impedances. Additionally, if you must maintain your core at 3.3v to remain within a power/thermal budget, you'll need to add level shifting, which itself generates additional heat, consumes additional power, and causes users to incur additional costs.

Your thresholds are also fairly arbitrary--a sharp 6V threshold requires a voltage comparator, which leads to its own instability problems in case of certain feedback structures that could very well arise on a floating pin. For a reasonable I/O buffer, the threshold is going to be a reflection of the gate threshold voltages of the transistors in the buffer, which ties back to our manufacturing limitations. You run into the same shoot-through problems, but they're worse now since the region where both FETs are on is wider thanks to the higher rails, and the supply voltage is higher leading to yet more power dissipation. You've made the issue worse rather than better.

Now, with all of that said, simply making I/O thresholds higher isn't going to fix the issue of floating signals. Given the amazingly high resistance of the gate oxide, a floating pin can easily reach 6V--especially given that there's a >6V rail nearby!

When all of this is said and done, we've delayed chip production by a year while we develop fabrication processes and establish contracts to do mixed-voltage systems with both high-performance cores at 1v2 and 12V I/Os. We've pushed our power budget up, meaning that we must buy more expensive heatsinks and fans, as well as larger batteries and power supplies, and we also haven't reliably fixed the issue.

Or, you could buy a tape/reel of 10000 pullup/pulldown resistors for $10 on DigiKey, or for less in Shenzhen. More likely than not, your PCB manufacturing partner already has some standard pullup/pulldown resistor on hand, loaded in their pick-and-place machines, and ready to be placed. Or, your chip might already include pullups/pulldowns, since those can be fabricated fairly easily on some processes using weak MOSFETs.

It has been solved already. Some microcontrollers have built in pull-up and/or pull-down resistors that can be enabled via software. But these are not active when microcontroller has no firmware so for safety reasons you might still want to have external resistors to keep stable state during powerup, reset or firmware download.

Logical reading (1 or 0) of a micro-controller may float at input GPIO pin if it is neither connecting to VCC nor GND, someone said it is because of surrounding RF interference.

Yes and this can cause problems internally. In the input stages of Figure 1 below the undefined logic states can result in both the upper and lower transistors turning on at the same time. (With proper logic levels only one is on at a time.) The result is a condition called "shoot-through" and a high (for the device) current will flow through the device. This is graphed on Figure 2. This will result in overheating of the gates. 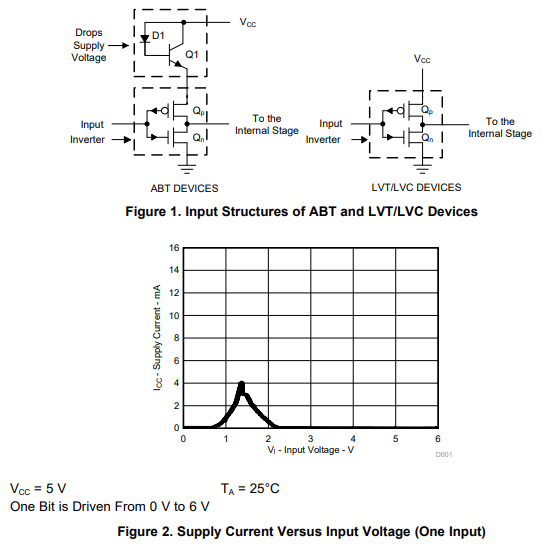 Figures 1 and 2 from TI's Application Report Implications of Slow or Floating CMOS Inputs.

The article goes on to explain:

Both CMOS and BiCMOS families have a CMOS input structure. This structure is an inverter consisting of a p-channel to VCC and an n-channel to GND as shown in Figure 1. With low-level input, the P-channel transistor is on and the N-channel is off, causing current to flow from VCC and pulling the node to a high state. With high-level input, the n-channel transistor is on, the P-channel is off, and the current flows to GND, pulling the node low. In both cases, no current flows from VCC to GND. However, when switching from one state to another, the input crosses the threshold region, causing the N-channel and the Pchannel to turn on simultaneously, generating a current path between VCC and GND. This current surge can be damaging, depending on the length of time that the input is in the threshold region (0.8 to 2 V). The supply current (ICC) can rise to several milliamperes per input, peaking at approximately 1.5-V VI (see Figure 2). This is not a problem when switching states within the data-sheet-specified input transition time limit specified in the recommended operating conditions table for the specific devices. [Emphasis mine.]

So, they are saying, "(1) Drive inputs to defined logic levels. (2) Switch between logic levels quickly."

I wonder could this problem be solved by how a microcontroller design. i.e. Enlarge the logical voltage range, say < 6 V for low > 6 V for high. Since interference may seldom reach such high level voltage.

That would make things worse.

Over the years logic power supply voltages have been decreasing to solve the power density problems as the devices have become smaller and smaller. Where 5 V logic was standard once, we now have 3.3 V and lower to reduce power consumption and to manage heat.

The TI article is worth reading. (And your English reads very well.)

There is very important rule in electronics: NEVER left anything out of control. So, if there is not strictly written in datasheet that the input has an internal pull-up or pull-down, DON'T let to have undefined state on this input. If you dont need this input, connect it to ground or Vcc, NEVER leave float. Such undefined states can cause some less or more accidental problems, very hard to investigate and solve - this is not worth to spent hours on fight them only because you want to save cost of one small resistor. This is really very bad practice. This is like car driving: always look at mirror before you stop on road.

NOTE: in case of modern MCUs the problem can be solved by configuring (programatically) unused i/o pins as output, so there is no need to connect them anywhere. But, if you changed i/o pin direction to input and there is no pull-up/pull-down inside MCU, you MUST take care on this and preserve proper pulling yourself. Float state is ARCHENEMY for us ;) ;) ;) ;)

Input immunity to stray A/m B field noise or V/m E field Noise is not determined by the DC voltage threshold, but rather the noise impedance and voltage or current of the crosstalk. The crosstalk is inductive to current noise and capacitive to voltage spike noise. It is not sensitive to DC nor does DC improve immunity.

Only the thresholds of say a Schmitt Trigger range and the input impedance define noise immunity. Otherwise the signal loop impedance with the driver impedance , Zol=Vol(Max)/Iol(Max) and the margin the nearest input threshold worst case define the power required to generate a false trigger.

Thus is also one of the reasons why the driver impedance has been designed by Industry standards for CMOS MFG’s to be lower as the Vdd max range is reduced in order to retain noise immunity.

The 3 major families are

the 'pull up' or 'pull down' resistor provides an electrical path to either negative (usually ground) and positive (usually supply voltage) when the output is not activated. It holds the output pin at that potential so that it doesn't have spurious output or unwanted wild ocscillations.(It provides a light load to the output of the chip) An unstable logic chip or OP-Amp will quite often overheat and self destruct..and if the load is capable of following the oscillations at high speed, then that is also likely to self destruct. (Think of a mechanical actuator or valve trying to work at god knows what frequency!!)

It just keeps things stable. When the output is driven by the logic processor, it cleanly changes state from high to low or vice versa...(depending on the logic and whether the output is 'tied' high or low)....when it is meant to change state.

Not the answer you're looking for? Browse other questions tagged raspberry-pi gpio pullup pulldown floating or ask your own question.