I tried to make an audio amp based on LM386 but the output is noisy when the audio is playing. Here is my circuit schematic I built on a solderless protoboard: 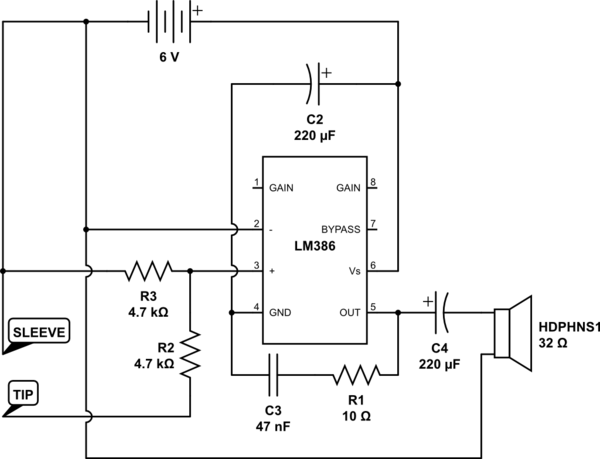 Power is supplied from four 1.5V batteries. I also added 50pF between input terminals to filter-out radio noise. When there is no sound playing, the amp is nice and quiet, but once the music starts the noise appears. There is also some reverberation when the music stops. When the inverting input is connected to the ground the effects get even worse. My guess is that there is a feedback loop between output and input, but I don't know why and how can be fixed. Adding coupling capacitor and/or voltage divider at non-inverting input or adding a bypass 10uF capacitor doesn't change anything.

EDIT:
According to the comments, I removed the 50pF capacitor between the inputs, connected the inverting input to the ground and added the voltage divider at the input. This made the sound much cleaner, but there was no gain. Output volume was not amplified regardless of the capacitor between pins 1 and 8. Adding DC coupling before the potential divider makes gain work again but also makes the output really noisy.

The LM386 has two inputs; they are differential like so: - 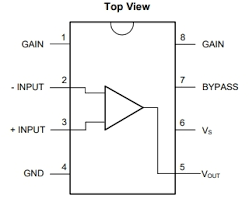 Ignoring the ridiculous value of the input capacitor on pin 2 in your picture, you basically have both inputs fed from the same signal and that won't work very well at all. Use one of the standard circuits is my advice and watch out for power 0V currents flowing through input areas. A standard circuit: -

The simplest way to fix your circuit is to build it as the datasheet recommends: 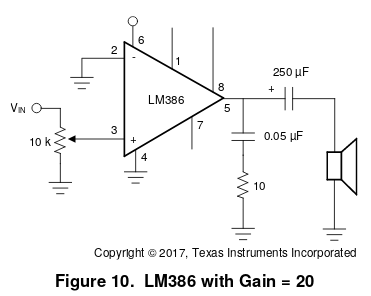 Notice the variable resistor connected to pin 3. You describe the problem as "noise when the music is playing," which makes me think what you actually have is distortion.

The most common sources of audio will have a line level output (PC) or a headphone output (smart phone, mp3 player, etc.) Signals at those levels amplified by a factor of 20 (as your circuit would do) will cause clipping (extreme distortion) in the audio.

The fix is to lower the volume. That's what that 10k variable resistor is there for. It reduces the signal level so that the output to the speaker doesn't clip.

Next after that is to add a series capacitor between \$V_{IN}\$ and your music source. A 1µF non-polarized capacitor would be fine. That should take care of any DC offset that may be causing problems.

Those two steps should fix your problems. The LM386 generally works well if you follow the notes in the datasheet. It isn't a great amplifier, but hasn't survived all these years by being a complete piece of crap.

Not the answer you're looking for? Browse other questions tagged amplifier audio lm386 or ask your own question.