In this transistor circuit, what is the purpose of the diode across the motor?

I am trying to follow an Audrino tutorial with my kid and I am confused by the role of the diode in this circuit.

In particular, I have the following questions: 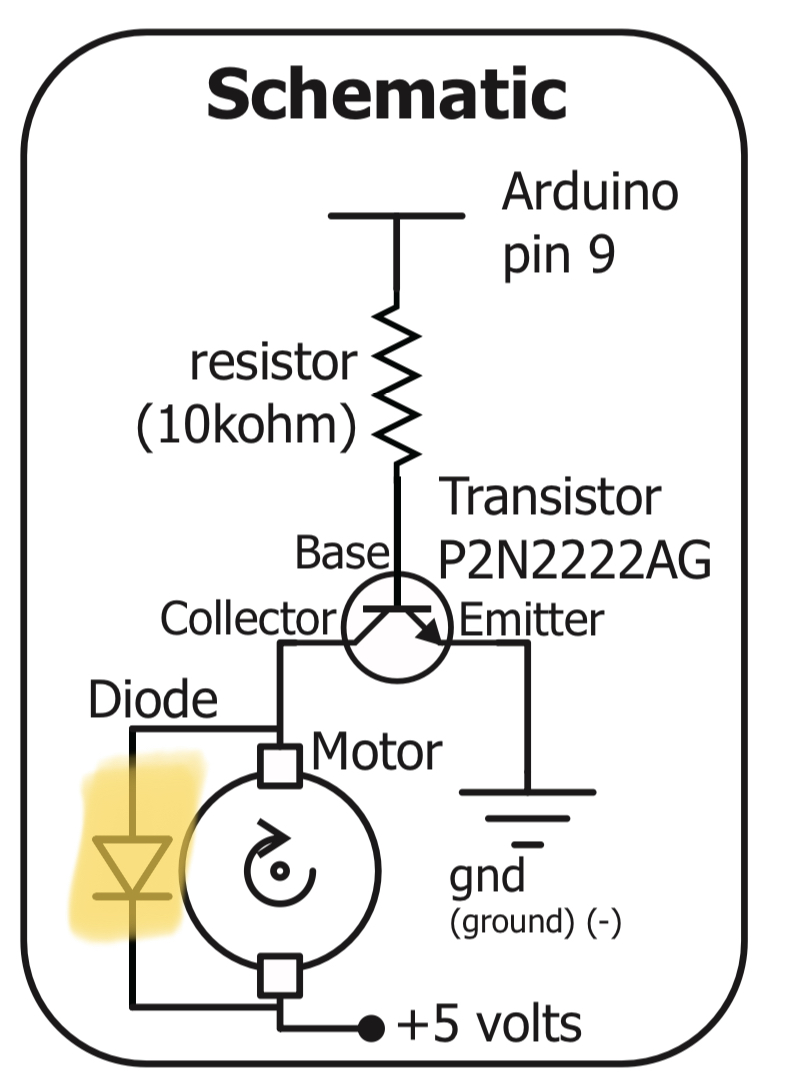 To understand this trick, a beginner needs to imagine what the voltages are (magnitude and polarity), and where the currents flow (direction and path). I know this from my personal experience; that is why, I have visualized these invisible electrical quantities in the pictures below by voltage bars (in red) and current loops (in green). I have considered the similar but simpler configuration with an inductor (e.g., a relay coil) but it can be applied to the motor as well. 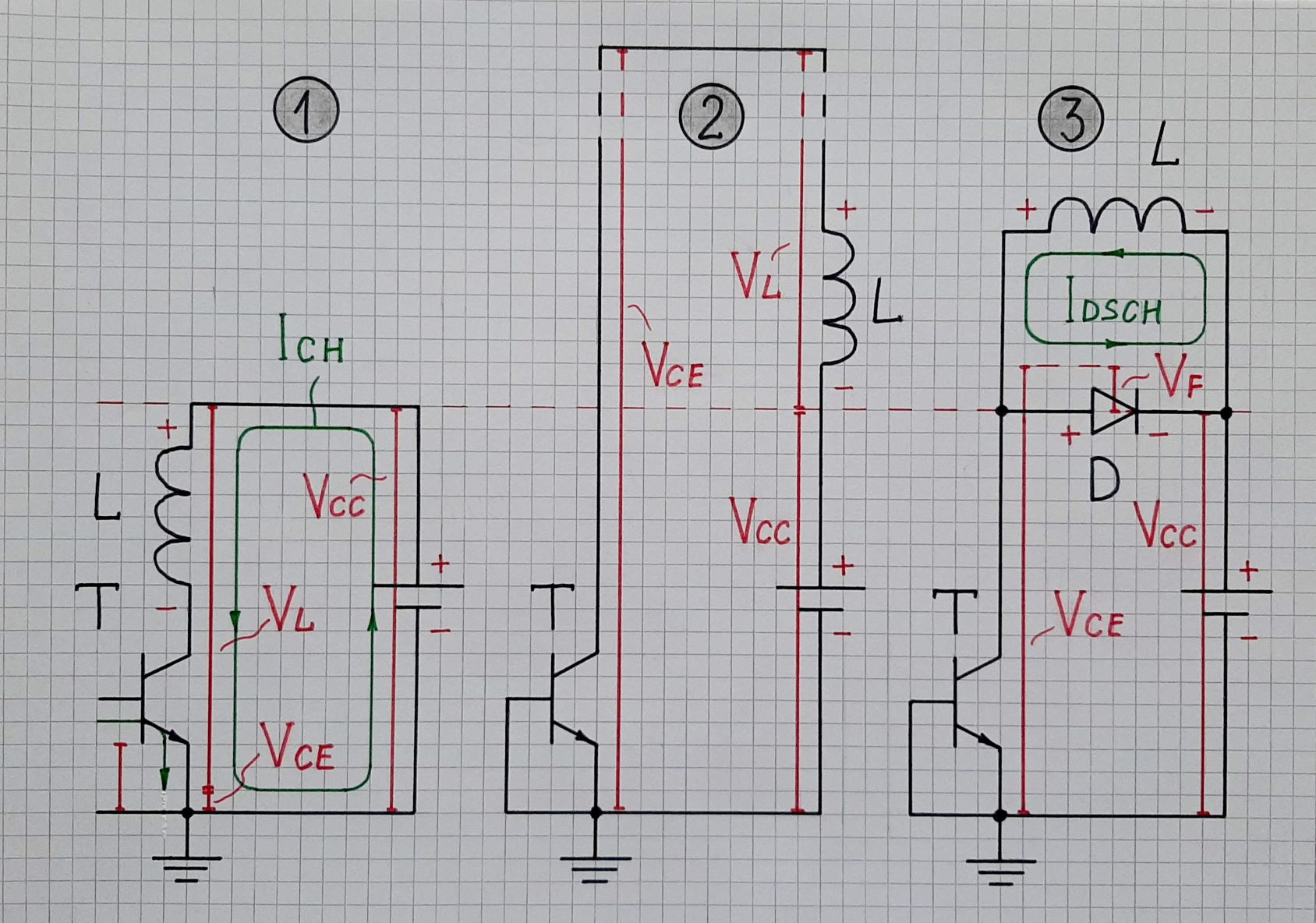 1. The key of intuitive understanding inductive circuits is to think of the inductor as of a "rechargeable current source". So, when the transistor T is turned on (Fig. 1), the supply voltage is applied to the inductor L and it begins charging. The current \$I_{CH}\$ gradually increases from zero to its maximum (determined by the internal coil resistance). Note the sign of the voltage at the inductor input is positive since it acts as a load.

2. When the transistor turns off (Fig. 2)... and there is no diode connected, the inductor, behaving as a current source, "wants" to pass the same current. First, it reverses the polarity of its internal voltage \$V_L\$ (back emf); then, as the circuit is open, it begins increasing this voltage with the hope to pass the current through the transistor. Thus its voltage exceeds many times the supply voltage and adds to it. It is as if the transistor is supplied by a very high-voltage compound power supply... and if its maximum voltage is not high enough, it will break.

3. If a diode D was connected in parallel to the coil (Fig. 3), it will provide a path for its current \$I_{DSCH}\$... and the coil will quickly disharge through it. Now the supply voltage is limited only to \$V_{CC} + V_F\$, which is safe for the transistor.

As a slight aside, I thought I should amplify Tony Stewart's comment.

The circuit you're looking at is perfectly fine in principle, but it cannot be used for any but the smallest motors.

Put it this way - in order to get much current (and therefor much torque or power) from the motor, you need the voltage to be as close to 5 volts as possible. This means that the voltage across the transistor (Vce) must be as low as possible, and certainly less than 1 volt. In addition to this obvious issue, keep in mind that the power dissipated in the transistor is the product of the voltage (Vce) and the current (mostly collector current).

This is perfectly possible, but there are limits. The most important is that, when the transistor is being operated with very low Vce (less than a volt, typically), its gain drops significantly. The general rule of thumb for this condition, called saturation, is a gain of 10 to 20, where you've got a choice of exactly how optimistic you want to be. The conservative value is 10. At this value, you can expect Vce's of about 0.2 volts or so - as long as you respect that this implies a specific current level.

This is hardly useless; you can spin a little indicator just fine with a low-power motor. It's just that you won't be able to make (for instance) any sort of vehicle, nor will you be able to lift much in the way of loads with a pulley.

If you do want actually build your circuit, what do you need for a motor? It will need to be rated for 5 volts or more, with as close to 5 volts as you can find. Buy yourself a cheap DMM (digital multimeter) for 10 to 20 bucks and measure the resistance of the motor. It will need to be on the order of 900 to 2k ohms or greater. Resistance equals voltage over current. 4.8 volts divided by .0027 to .0054 will give you the numbers (remember that we were talking mA, not amps).

Obviously, you can get more current by driving the transistor harder, and you do this by reducing the base resistor. However, be aware that at some point the Arduino will not be able to drive enough current from pin 9, and the voltage at the pin will start to drop. You should be fine with reducing the resistor to 1k, and possibly to the vicinity of 330 ohms or thereabouts, with a consequent increase in transistor (and motor) current. I encourage you to investigate this in a systematic way. When you do, also check the temperature of the transistor on a regular basis. 2N3904s are not high-power devices, so don't be surprised if it gets hot. Fortunately, they are also really cheap, so don't get too paranoid about burning a few out.

In answer to your questions, while the circuit will work without the diode, its purpose is to protect the delicate electronic components from very high voltage surges coming from the motor when it shuts off. You see, the windings of the motor act, not only as an electromagnet, but also as an inductor, which stores a great deal of energy in its magnetic field. When the power supplied to the motor shuts off, that field collapses, and dumps all its stored energy back into the circuit in one big surge, which can damage the electronics components. So, the diode then acts as a "short circuit" for the motor, providing a path for the windings to discharge, much like a bleeder resistor across a large capacitor.

Next, regarding the direction of current, historically, current was considered to flow from points with + charge to those with - charge, however, it was eventually discovered that electrons themselves do, in fact, flow from - to + points. This concept is referred to a "electron current", while the original idea is called "conventional current".

Since the formulas used to calculate electronic values were devised using the wisdom of the time, "conventional current" is still widely used when designing new circuitry.

Therefore, it would be more correct to say that current flows from ground, through the emitter to pin 9, though, in reality, the distinction is rather academic; whichever you believe, it "just works". Hope this helps - keep learning & enjoying this fascinating field of study!

All the answers here stress that inductive loads like a motor carry a load of energy that the flyback diode discharges. This is not what happens here, and flyback diodes will be comparatively small devices obviously not being able to emit a lot of energy.

What is at stake here is that switched-off inductors add as current sources, maintaining their current current. Even if this current is low, if it has infinite resistance to work against, the resulting voltage can become arbitrary large, like a static discharge when walking across some plastic fibre carpet. It's the resulting voltage alone that destroys circuits.

The flyback diode provides a path for the current to keep flowing. Since the voltage across it is low (ideally zero), not much energy gets destroyed here: the bulk dissipates in the resistance of the motor coils. However, depending on the size and type and load of motor, the motor may act as a rather large inductance since it does not feed back just electrical field energy but also mechanical energy back to its inputs when switched off. Generally, the flyback diode would be dimensioned similarly to the driving transistor.

The thing to remember that shortcircuiting an inductor is its idling mode while an open circuit is forcing the stored energy out of the magnetic circuit of the inductor immediately. So the flyback diode is not just protecting the driving transistor but also the inductor itself which might otherwise have sparks breaking through the isolation of its coils and thus damaging it.

Say that the motor is spinning a flywheel.. When the power is turned off the diod bleeds back the energy back thru the coils of the motor to short out or cancel out generated electricity.

Not the answer you're looking for? Browse other questions tagged arduino transistors motor diodes ground or ask your own question.