First I power the motor with a flywheel and a motor with no substantial load. (same kind of motor).

I then disconnect the voltage source and the amperage dips negative for a moment and then returns to being positive. (The voltage stays positive throughout) Since the motor with the flywheel is being used as a generator shouldn't the current be always negative? 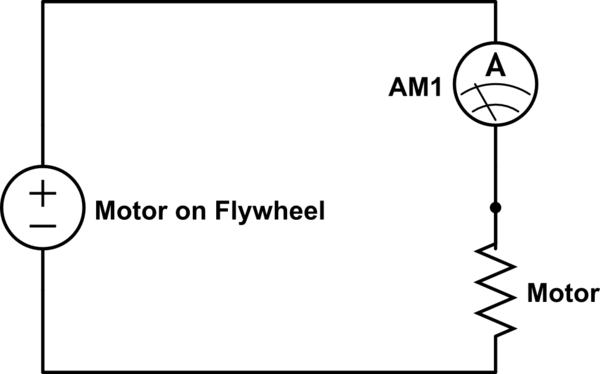 Since the motor with the flywheel is being used as a generator shouldn't the current be always negative?

No, it should always be positive (as your second circuit indicates).

This behavior can be simulated with electronic components by using capacitors to represent the motor/flywheel inertia. Here's a simulation I made in LTspice:-

C1 and C2 represent the inertia of each motor, R1 and R2 are their internal resistances, and R3 and R4 absorb the 'iron' losses (magnetic, friction etc.). The flywheel motor has higher loss due to higher bearing loading and flywheel windage.

Here is the result:- 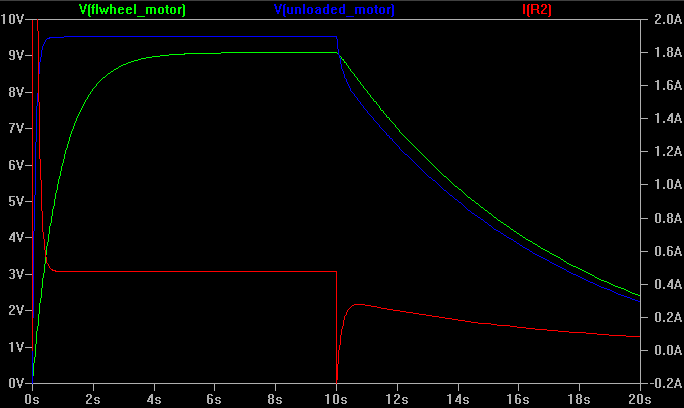 When power is applied the unloaded motor gets up to speed quicker due to its lower inertia (represented by smaller capacitance). During this time both motors are drawing current from the supply, but the unloaded motor draws less current due to lower torque load, producing less voltage drop across its internal resistance and allowing it to spin faster and generate higher voltage.

When the supply is turned off, the motor acts as a generator and supplies current to the rest of the circuit, just like a capacitor.

The thing that causes the speed limit in permanent magnet motors is back emf, and this voltage source has the same polarity as the supply. This is how it reduces the current through the motor, and this is why the motor maintains the supply polarity when the supply is disconnected.

Not the answer you're looking for? Browse other questions tagged current dc-motor or ask your own question.

6
How do DC motors work with respect to current, and what consequence is the current through them?
6
How to tell whether a motor is an AC or DC motor?
0
Braking a small, high-speed DC motor
3
DC motor RPM accuracy/precision
0
How to wire a PPTC polyswitch + blown indicator LED to protect a bi-directional DC motor from stalling?
1
Selecting the right PMDC motor and battery
1
How can the current change suddenly in an RC circuit?
1
Using a DC motor as a generator as well as a motor with PWM