How does this high amperage LED dimmer work while being so small?

I am trying to make a custom dimmer circuit for an off the shelf LED lamp meant for aquatic plant growth. I found a generic dimmer that many people (in the aquatic plant community) use, and am very curious how they managed to make a dimmer so small.

According to the lights it is supposed to be able to dim, it connects to a 24V@(max)4A power supply (input to power supply is 110-230V). The output is directly used by the LED lamp (which we can assume uses at least more than 2A).

Some ways to dim LEDs that I found are

1.) PWM into a mosfet...but at min 2A, I feel this thing would get much too hot. The PWM would then need another IC (at least a 555) which I don't think can fit in there.

Edit: It also seems somewhat wrong to control LED's at this amperage with PWM...especially given that there is a blackbox driver circuit that comes after this dimmer circuit and turning that on and off at high frequency seems 'wrong'.

2.) Constant current...I'm not entirely sure how to make a constant current source driver. I would imagine that this would be in the actual lamp circuit rather than the generic dimmer circuit or generic power brick. Also this dimmer is adjustable, which I am not sure how you would do in a small space for a constant current driver.

3.) basic buck converter to limit the voltage coming in. The issue again is with how you can dim this dynamically with button presses.

I can imagine building any of the three options above to control high power LED's, but I can't wrap my head around how I would go about making the result so small...

Short of me buying the thing and taking it apart, it would be great if anyone had ideas on this! 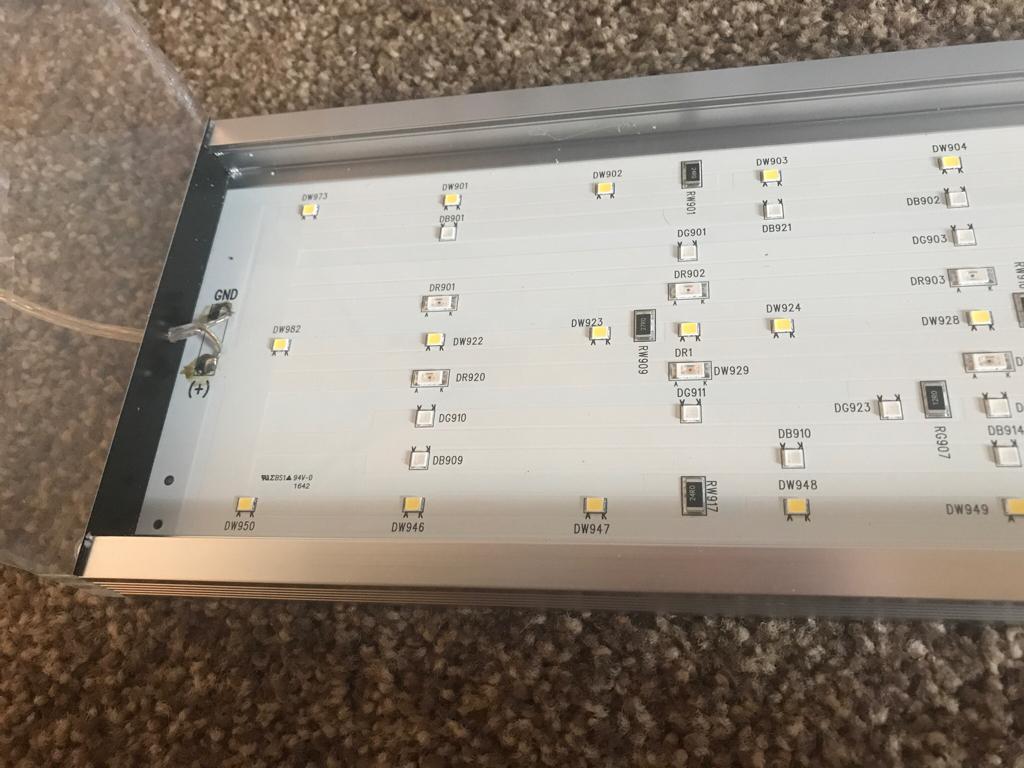 For sure it's using PWM to control the lights via a MOSFET.

A tiny SMT MOSFET can easily control a few amperes at 24V and remain very cool. The controller chip is probably an ASIC or a microcontroller, given the up-down button control scheme. It might take 10 or 15 components total including the power supply for the controller.

5
How to dim an LED with constant current supply?
0
Designing a power supply that drives an LED array supply
3
Removing flickering of LED lighting
0
PWM dimming using the TLC5916 current limiting LED driver
1
Is there anything wrong with my current setup for LED
2
Dim LED lamp with constant current power supply using resistors
1
Can I prevent a 9V LED flickering when dimmed to around 30%?
0
Modifying a sliding foot dimmer KFD-527G for LED bulbs
0
Convert 24VAC SCR Dimmed to LED
2
How does this LED last this long?