Here is a quote from section 3.4 "Speed-Enhancement Circuits" in "Fundamentals of MOSFET and IGBT Gate Drive Circuits" written by Texas Instruments:

When speed enhancement circuits are mentioned, designers exclusively consider circuits that speed-up the turn-off process of the MOSFET. The reason is that the turn-on speed is usually limited by the turn-off, or reverse recovery speed of the rectifier component in the power supply. [...] the fastest switching action is determined by the reverse recovery characteristic of the diode, not by the strength of the gate drive circuit. In an optimum design the gate drive speed at turn-on is matched to the diode switching characteristic.

The model considered in the document is the following: 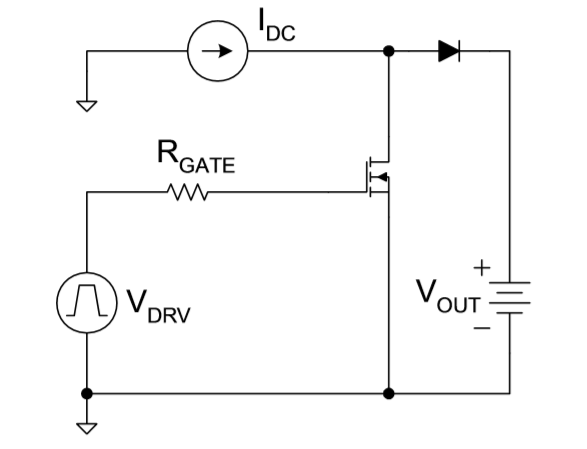 At the beginning, the mosfet is off, so Id is zero and Vds is equal to Vout plus the diode forward voltage. Vdrive is equal to Vdrive_low.

Now, Vdrv step to Vdrive_high. As Ciss (Cgs + Cgd) was previously discharged, the voltage across Cgs begins to charge, Cgd is also charge because Vgs increases and Vds is clamped. At a certain time, Vgs increases to Vthreshold. Id starts to increase linearly with Vgs (linear region). As Idc is constant, the current through the diode is equal to Idc-id (id is equal to the current through the mosfet). Ciss continues to be charged. At a certain point Id is equal to Idc and the diode stops conducting and Vds is now not clamped. At this moment occurs reverse recovery time of the diode. As Vds decreases, Cgd must be charged, this is the miller plateau… I described rapidly the processes but if you are interested, you can find more information by reading "Fundamentals of MOSFET and IGBT Gate Drive Circuits" written by Texas Instruments.

My question is: Why is the turn-on speed linked to the diode reverse recovery time?

My question is why the turn on speed is linked to the diode reverse recovery time ?

It isn't. What they are saying is: usually the FET can turn on faster than the diode can turn off, however that results in both the FET and the diode being on simultaneously, ie cross-conduction, and increased losses. So it is more efficient to switch the FET a bit slower to make sure it turns on right as the diode turns off.

So a better way to put it would be "The optimal MOSFET turn-on time for highest efficiency is linked to the diode recovery time". It isn't a characteristic of the FET, it is a design choice.

Not the answer you're looking for? Browse other questions tagged mosfet switch-mode-power-supply mosfet-driver reverse-recovery or ask your own question.

2
Calculating the current needed to drive an N-MOSFET
4
Reverse recovery parameters
2
Why reverse connected MOSFET start to turn on at Vgs<Vth?
5
Driving MOSFET/IGBT - Why Miller Plateau is a plateau?
0
Is it possible to reduce the Miller's plateau voltage?
1
Trying to understand MOSFET Turn on Procedure
3
Purpose of 2 resistors and a diode in a MOSFET circuit
1
Question regarding the MOSFET gate Miller plateau region